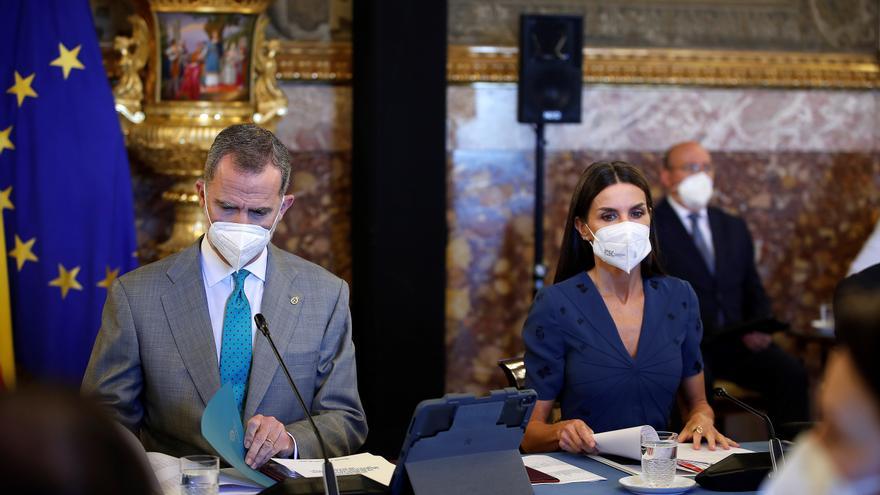 Madrid, Jun 4 (EFE) .- The kings have presided this Friday at the Royal Palace the annual meeting of the Board of Trustees of the Princess of Asturias Foundation (FPA), in which the memory of last year was presented, in which the entity obtained a surplus of 54,267 euros in a year marked by the limitations imposed by the pandemic.

In the palace's gala dining room, Mr. Felipe and Mrs. Letizia were accompanied by the President of the Principality, Adrián Barbón, in his capacity as honorary vice president of the foundation, the head of the FPA, Luis Fernández-Vega, and the director , Teresa Sanjurjo, sources from the Royal House have indicated.

The governing body of the foundation has met again in person with the assistance of 69 employers, after last year it could not do so due to the health crisis.

As is customary at this event, the kings and patrons have been informed of the report on activities for the past year, in which the foundation commemorated the 40th anniversary of its awards, and a report on its financial and patrimonial situation.

For 2021, the FPA has a budget of five million euros, of which 85 percent comes from private entities and the rest (823,000 euros), from public administrations, it says on its website.

The Oviedo City Council and the Ministry of the Presidency each contribute a third of the public funds (300,000 euros), while the General Meeting of the Principality contributes 100,000 euros.

The last award ceremony in Oviedo had to be moved from the Campoamor Theater to the Hotel de la Reconquista, where there was no audience.

Princess Leonor participated for the second time in the gala, after its premiere in 2019, but has not yet taken part in the annual meeting of the board of trustees.

She did so by surprise last December at the session of the governing body of the Princess of Girona Foundation (FPdGi), of which she is also honorary president.

At the meeting in the Royal Palace, the president of KPMG, Hilario Albarracín; that of Zardoya Otis, Bernardo Calleja, and that of Abanca, Juan Carlos Escotet, among others, the sources indicate.

Of the FPA awards this year, the one for the Arts, the Serbian artist Marina Abramovic; that of Social Sciences, to the Indian economist and philosopher Amartya Kumar Sen, and that of Sports, to the Paralympic swimmer Teresa Perales.

In the next few days, those of Letters will be decided; International cooperation; Investigation and Concord.