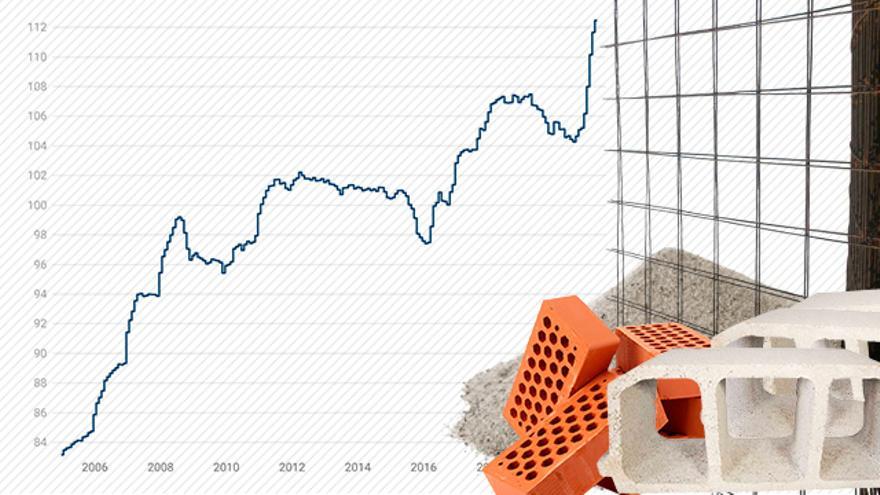 The cost of building materials – iron, wood, plastics, aluminum, copper or concrete – has been rising for months around the world. This has two immediate effects: the first, that developers will earn less with the flats they have already sold; the second, that those who take out from now on will be more expensive.

The reformers, who live a golden age after the confinement, are in the same: either they assume the rise or they modify the budgets upwards. “Wood has risen 70% since the beginning of the year. I gave a budget for a porch and it had to be raised,” says cabinetmaker Ángel Otero. “Either you lose your word or you lose money. Since I was a good customer, I did it and I lost money.”

In Spain, the rise in costs is already observed in the official data of the Ministry of Transport. The following graph shows the evolution of prices since 2006, taking into account only materials and not labor.

The ACR group elaborates your own construction cost index and in June it warned of a general rise of 9.6% from January. By item, the largest year-on-year increases (between May 2020 and May 2021) were in foundations and structure, which act as leading indicators, woodwork and glassware.

It is not an entirely unusual situation, although the biggest recent rise in memory is that of the cost of workers before the housing bubble burst and which now remains stable.

“We experienced that in 2008. Labor was scarce because everyone promoted and prices rose,” acknowledges Sergio Serrano, CEO of the Caledonian construction company. “But globally you did not have this problem. I have been in the sector for twenty years and I had never seen this. Every year there are moderate increases, of 3% or 4%, but now they are 40% from one month to another” .

What’s going on? As explained from SEOPAN, the Association of Construction Companies and Infrastructure Concessionaires, “this inflation, which already occurred in a crisis such as that of steel in 2006 or that of oil in the 70s, is caused by the increase in demand in the heat of economic recovery, the slow improvement in production capacity worldwide and the significant rise in the cost of maritime transport “.

The recovery has hit the construction sector with force and has encountered a problem of shortage of supply. Analysts believe that the situation is transitory and will moderate as we return to normality. “Many people have decided to reform their houses and there is a bubble at the local level,” says Serrano. “I think the market will stabilize when the street breathes that we have returned to normal.”

Until then, the most affected are construction companies, new developments and public works.

“That the materials go up in price is a stick for construction,” acknowledges a source from a Spanish real estate developer. “The numbers of the promotions are made with static prices considered in a ratio. And in the tenders they usually go to the lowest price. Several construction companies are asking for help: they made budgets with materials that they had not yet contracted and that have risen. it happens a couple of times nothing happens, but if it happens with a lot of materials or items it gets out of hand. And the construction company can’t bear it. “

From Seopan they warn about the “serious” impact caused by the rise in companies and ask for a special rule to resolve the situation. They ensure that the official indices do not reflect the real evolution of prices – according to the indicators that handle, steel has risen 70% in one year, metals 45%, bitumen for bulky mixtures 85%, copper 92% and aluminum 56% – and that some contracts and terms are in “danger” because contractors must cope with the rises.

The price review in public works contracts is not mandatory and must be justified in each specification. Thus, Seopan asks to review the works in progress and incorporate a mandatory review clause in the new contracts. In a recent forum, its president Julián Núñez also advocated for “extensions” and “compensations in the works that are already in progress” for the construction companies.

The reformers and companies that work in private works avoid the situation by advancing the money. “It’s what we’re doing,” says Serrano, from Caledonian. “But always with a margin of time, we cannot advance so much money either. What we do in materials such as wood or iron is to give a signal and have that price reserved for us before the increase. The supplier gives you deadlines and tells you: in two months you have to have it. “

Caledonian has several promotions underway in Madrid, Malaga and Ibiza. With those that are already sold there is not much to do. “We do a project and, before starting the work, we calculate what it will cost us with the prices of that moment. With this unforeseen event, our business is being a little less profitable. But you cannot lower it,” says the CEO .

With regard to new construction, whose cost is not only higher but also grows above second-hand housing, there are different opinions.

Pedro Soria, commercial director of the Tinsa appraiser, maintains that the effect will not be immediate. “The promotions that have already started have closed the contracts for the execution of the work. Those who may suffer a narrowing of margins are the contractors, who could have difficulties if they do not have sufficient financial lung, he says.” It remains to be seen if it will last or moderate. . If this trend consolidates in the future, it could end up moving to the final price. In that case, it remains to be seen if the market can take it, or if it is the promoter that must support it within its margins. “

Other sources consulted also point out that the rise in the price of materials causes the rise in other costs that are calculated as a percentage, such as fees and licenses. From the Association of Real Estate Developers of Madrid they have it clear. “If the situation continues, it could have an impact on the projects that will be launched in the coming months,” says the general director, Daniel Cuervo, in statements to elDiario.es.