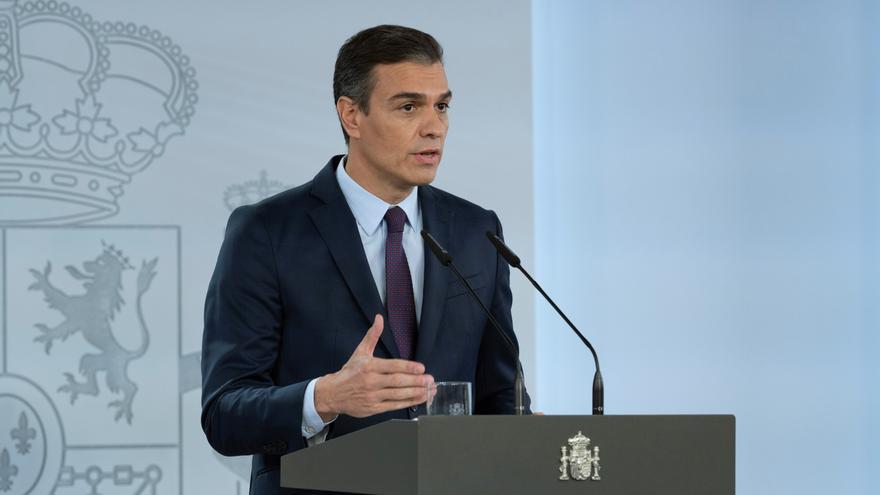 The resurgence of the second wave of the pandemic has increased this Friday the pressure exerted by the autonomous communities for the central government to declare a state of alarm throughout the country, with the aim that mobility restrictions have legal support that are necessary to stop the second wave of the health emergency.

Euskadi, Extremadura, Asturias and Melilla have formally requested the Executive this Friday to declare the alarm in their respective territories. The Catalan Government plans to hold an extraordinary meeting this afternoon to decide if it also requests it. And other communities such as Madrid, the Valencian Community or the Region of Murcia have announced, for their part, two curfews to prevent mobility during the night, measures that will have to be ratified by the courts in the coming hours.

The pressure on the Executive to declare the alarm in an extraordinary Congress of Ministers increased after the institutional statement made this Friday by the President of the Government, Pedro Sánchez, who warned that the pandemic situation is “serious” given that infections have doubled compared to the worst day of the first wave of the coronavirus in Spain and demanded the collaboration of all to reduce the spread of the disease to the minimum and thus avoid a new confinement such as spring.

Sánchez also applauded the Government’s collaboration with the autonomous communities when referring to the measures adopted in the Interterritorial Health Council this Thursday in which an early response guide was approved and summarized during the appearance. The president acknowledged that the actions contemplate in the last scenario the application of the state of alarm, but left his request in the hands of the autonomies, insisting that the Executive is prepared to implement “the measures that are necessary.”

Moncloa sources do not rule out finally applying the state of alarm throughout Spain although they advocate waiting to know how many autonomous communities are finally requesting it to make a decision.

The presidents demand “a unitary measure”

Sánchez’s appearance occurred less than 24 hours after the president of the Generalitat Valenciana, Ximo Puig, announce that a curfew will be implemented as of Monday in the Valencian Community, between midnight and 06:00 in the morning, at least until December 9, to try to stop the advance of the pandemic. Puig explained that the Valencian executive was in favor of “a unitary measure for the entire Spanish territory”, but clarified that some autonomies opposed the initiative in the Interterritorial Council on Thursday, “which forces the Valencian Community to make its own decisions “.

Too announced this Friday a kind of curfew –Although he refused to use this term– the Regional Minister of Health of the Community of Madrid, Francisco Ruiz Escudero. In the region, meetings are limited from midnight to six in the morning only to “cohabitants.” In addition, the Executive of Isabel Díaz Ayuso has decided to implement again measures aimed at restricting mobility and capacity in 32 basic health areas where the incidence of the virus is higher.

Although on Thursday afternoon the Ministry of Health of the Region of Murcia considered that the central government was responsible for adopting the curfew measure with the “legal instruments considered”, this Friday the Murcian president, Fernando López Miras, communicated to the mayors of the Region the request of the endorsement to the Superior Court of Justice of the Region of Murcia (TSJRM) to be able to impose said measure before the advance of the virus in the Community.

At a press conference, the Murcian president, to questions from journalists, could not clarify when the curfew will come into force – or the date until which it will be decreed – but he did announce that it will be in force from 11 p.m. to 6 a.m. “and in that period of time it will not be possible to circulate through the streets of the Region except for work displacements or a medical emergency.” The objective, he pointed out, is to avoid meetings “between those who still do not assume that we are not in a normal situation” and has cited “unwanted situations such as large bottles in the street or parties in private homes”; an “absolute irresponsibility”.

Urkullu seeks to “preserve the health of citizens”

A few minutes after Sánchez’s statement on Friday, the Lehendakari Iñigo Urkullu, formally asked the Prime Minister to declare a state of alarm in the Basque Country and hand over its control to the regional presidents. The Basque Government, a coalition of PNV and PSE-EE, believes that it is time to “try to preserve the health of all citizens” and demands that the “command and management” of the exceptional regime be delegated to the regional Executive.

The president of the Principality of Asturias, Adrián Barbón, also requested the state of alarm this afternoon. as you advance The New Spain, which explains that the regional government meets this Friday the government to apply in certain areas more restrictive measures than those proposed by Health.

Another of the regional presidents who has already requested the alarm has been that of the Junta de Extremadura, Guillermo Fernández Vara, which considers that in this way there will be “a sufficient legal basis to clearly restrict mobility.” Fernández Vara has clarified after the celebration of the second extraordinary Government Council this Friday that it is not about confining citizens to their homes, “but about limiting mobility and this public health effort will be much easier with the state of alarm ”.

These autonomous communities have also been joined by the autonomous city of Melilla, which this morning requested the application of the state of alarm in order to adopt more restrictive measures to deal with the virus.

Sources from the Government of Castilla-La Mancha explain to elDiario.es that they have been “all week asking for the state of alarm for the curfew and the same measures throughout Spain.” And sources close to a socialist regional president insist that “to be effective, they have to be the same measures throughout Spain.” The president of La Rioja, Concha Andreu, said last night, in an interview on TVE, that “a regulatory framework” is necessary to implement the curfew.