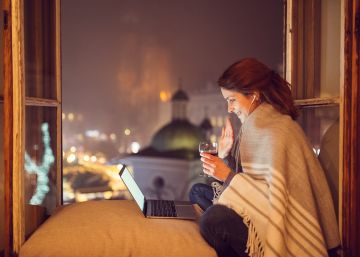 From one day to the next, confinement forced us to make mmany of our daily actions exclusively onlineto. Work, school, university, any daily exchange; In short, a large part of what we call “social life” was transposed into pixels.

Three consequences stemmed from those circumstances. The first was an extreme intensification of the use of our digital protocols. Later, its extension to many other activities, some of which we do not assume that it would be reasonable to carry out that way: boards of directors, organization of congresses, summits of heads of state, even participating in a snack on WhatsApp. Ultimately, there was a phenomenon of naturalization, as if, from now on, it was normal to carry out all these human activities without resorting to a shared carnal presence.

In this sense, we have crossed a threshold, which shows the advent of a new condition, marked by an increasingly totalizing relationship, especially in the world of work, and maintained by digital systems. Some, in the name of their own interests, have been able to propagate a newspeak that describes physical encounters as “face-to-face”, which we must now articulate alongside (or substitute for) what happens “remotely”, rhetoric that was quickly trivialized and that it allowed to suppose that this movement was inscribed in the order of things.

They are control procedures that are insidiously instituted, just like the telescreen of 1984by George Orwell, but in 2020 version

At the worst moment of the epidemic, we realized that the quality of the network infrastructure and the ability of workers to make good use of communication tools – particularly Zoom, which facilitates online meetings – could be more decisive than that of a physical place and the fact of performing tasks in the presence of others. This finding constitutes a conceptual break. Why should certain modalities be preserved when these processes have proven their effectiveness and the situation demands, today more than ever, a reduction in costs?

So much so that Mark Zuckerberg just announced that Facebook employees who want it they will be able to telework permanently, in the same way as other companies that intend to generalize these uses. For example, Allianz insurance, which intends to encourage home office, or the New York Daily News, one of the US newspapers with the largest circulation, which, in a more radical way, has left its offices to “become a newspaper without physical writing.” The need to find the right mix of “face-to-face” and “remote” life becomes the new doxa. However, we must be very careful against the prospect that the second formula could dethrone the first. Everything will lead to this, in view of the benefits obtained, in particular in the private sector.

Teleworking has resulted, for many, in a series of deteriorated working conditions due to lack of space, the presence of members of their families in their homes, the obligation to navigate between different activities and, in particular, to take care of school monitoring of their children. A burn out [trastorno de agotamiento laboral] Of a new type has appeared, because of a confusion between domestic and professional life, which prevents a differentiated and balanced distribution of tasks. Occupational health has infiltrated the place of residence. Questions arise, in labor law, regarding the property of the material used and its wear or energy consumption. And the ecological impact of the widespread and uninterrupted use of networks should not be overlooked.

The confinement was not only a biopolitical event but also a psychological shock. We experience a generalized telesociety without warning

They are control procedures that are insidiously instituted. Same as the telescreen of 1984, by George Orwell, but in the 2020 version, they allow us to know in real time if an employee is performing well their activity, quantify the levels of attention and reactivity, and request anyone at any time. It can only provoke an internalization of the tracking of our behaviors, in the image and likeness of the methods present in customer service centers, where operators are permanently subject to an evaluation, fulfilling a dream of ultra-optimized management, which now seems to extend to multitude of other trades.

It is true that these techniques take on a less sensational appearance than the COVID tracking applications, which cause so much indignation in places like France, when, in reality, they are just as or more pernicious, being called upon to penetrate our intimate space and spread out. in our daily life. Do we understand the scope of these legal and political challenges in our democracies?

But the most crucial thing is a phenomenon of anthropological scope, the severity of which we cannot yet calculate: the establishment of a new paradigm in interpersonal relationships. The screen has been erected as an instance of interference in our relationships. As if, in a simple flash, we had witnessed the dawn of a new era for humanity, in which our “pixel masks” are responsible for making the “social distancing” imposed by the coronavirus viable.

A swell begins to churn and may no longer settle. In a moment of deafness between the components of the social body, there is an erasure of the bodies and a technified mediatization between beings, which seems called to intensify and which could be normalized at full speed. Confinement was not only a biopolitical event due to our compulsory sanitary confinement, but also a psychological shock. We have had to experience, without warning, a kind of telesociety generalized. And yet there is nothing less natural than that situation …

The reunions of last summer should be understood as an irrepressible need for carnal proximity with others, in a society that makes life without contact the norm.

It is important to understand from this angle the reunions of last summer as an irrepressible and viscerally human need for carnal proximity with others, within a society that promises to make life “without contact” the dominant norm of conduct. We must also learn to establish a safe distance from an excess of separation and a sudden and accelerated loss of our sensitive interactions, to the extent that it would be a collapse of what life in society implies. Today we know that the virus is destined to stay with us. During the first epidemic wave, these uses were imposed out of necessity. Discussions within the world of work that take into account the particular situations of all parties involved will need to take place during the fall.

We have been too indolent with the digital industry. And, in many cases, we have paid a high price for it. As the age of access is replaced by the age of excess, we must exercise great vigilance to safeguard our fundamental principles. In the first place, those that allow us to guarantee our indispensable cohesion, in a fractured and suffering society, which depends to a great extent on ties founded on a shared sensibility. Taking into account that certain economic actors know how to make the most of the occurrence of catastrophes, it will not make us even “amish”Nor in adherents of a“ return to the lamp ”, to take up the terms of Emmanuel Macron, the shared will to oppose an increasingly comprehensive digitization of our existence and to worry about the good (and vital) ecology of our relationships.

Eric Sadin is a French writer and philosopher, author of Augmented humanity Y The siliconization of the world, both published by Caja Negra. The same label just released the essay Artificial intelligence or the challenge of the century. Anatomy of a radical anti-humanism. This article was originally published in the newspaper Liberation.