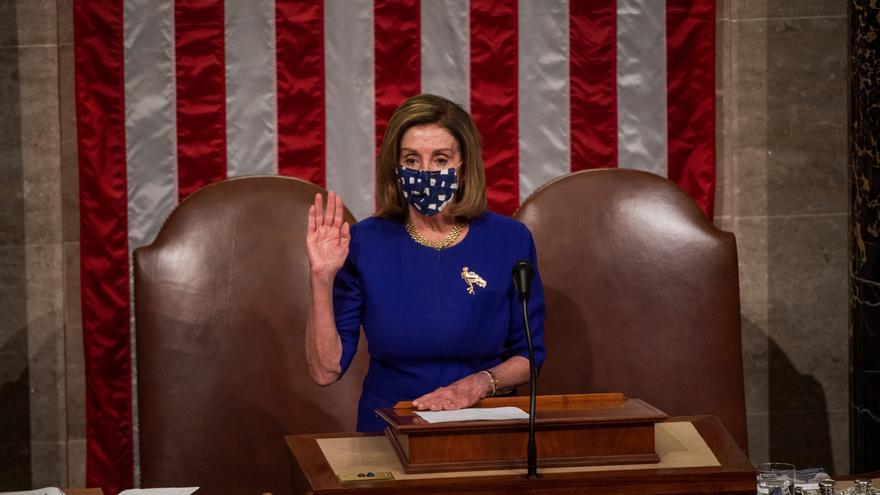 The newly re-elected Speaker of the House of Representatives, Nancy Pelosi, has urged the immediate replacement of Donald Trump as president. To do this, the Democratic leader has invoked Amendment 25 of the Constitution, which contemplates replacing the president if he is “unable to fulfill the powers and duties of the position.” As the implementation of this mechanism depends on the vice president, Mike Pence, Pelosi has suggested that, if it does not do so, it will activate a process of impeachment.

Pelosi has been convinced that “this dangerous man” can do “harm” to the country in the thirteen days that remain in the White House, so she has urged to start the impeachment processes as soon as possible. This has been pronounced 24 hours after Trump supporters stormed the Capitol while the session that had to certify Joe Biden as president-elect was being held. Democrats have raised the tone in recent hours and are pointing directly at Trump. The speaker of the House of Representatives has called the assault a “seditious” act.

Pelosi has defended that if Pence does not choose to impeach Trump using that mechanism, a process of impeachment, although this would require more debates and votes in both houses.

Biden, on the assailants: “Domestic terrorists”

The president-elect of the United States, Joe Biden, has returned to appear before the media one day after the assault on the Capitol during the session that had to certify him as the winner of the elections and has raised the tone regarding the qualifications of the people who they participated in that violent irruption in the headquarters of the Congress. “What we witnessed yesterday was not dissent, it was not disorder, it was not a protest. It was chaos. Do not call them protesters, it was an unbridled crowd, insurrectionists, domestic terrorists,” Biden said.

The president-elect has also said that it cannot be said that what happened on Capitol Hill could not be foreseen. “We could see it coming,” said Biden, who assured that the riots were the “culmination” of the “assault on institutions” carried out by Donald Trump over the last four years. “He unleashed an all-out assault on the institutions of our democracy from the beginning.” The Democratic president has spoken with such harshness in the appearance in which he has appointed Merrick Garland as State Attorney General. “We have to restore the honor of the Justice Department,” Biden said.

The pressure is also increasing on Trump, who has already suffered the first loss in his cabinet after the violent acts on Wednesday with the resignation of the Secretary of Transportation, Elaine Chao.

For now, the outgoing president has limited himself to ensuring that there will be a formal transfer of powers, despite not recognizing the electoral results. “Although I totally disagree with the outcome of the elections and the facts prove me right, there will be an orderly transition on January 20,” he said in a statement.