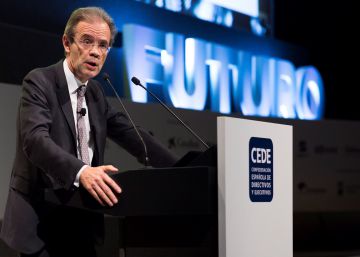 The president of Caixabank, Jordi Gual, has lashed out today against populisms, of which he has said that they are a threat to economic progress and that they put the democracies at risk. In his opening speech at the XVIII Directors Congress held in Malaga, the Catalan executive has described populism as "the triumph of emotion over reason" and stressed that "conflicts of self-esteem exploit layers of the population "and offer" isolationist responses and generate artificial identities. "

"We have had to live a huge period of change in our society, with transformations that are causing restlessness, fear … The current system has been called into question and that extremisms have taken advantage of it," he added. In his opinion, these populisms have negative consequences with what happens within countries, "create fragmentation and call into question our systems of liberal democracies and the social economy."

In the mind of the more than 1,400 attendees was the Catalan case that Gual lives closely. However, he never referred to this conflict at any time. "This happens in developing countries, with populist leadership, but also in developed countries," he said. "In fact, in Europe the aftermath of the Great Financial Crisis was especially severe. Thus, tensions within some countries have given rise to Brexit and the emergence of populist leaders in other countries, as is the case in Italy. positive note, it is possible to think that the solidity of the institutions in the developed countries, can act as a containment dam, as we have seen in France and in Italy; and more recently in the USA ", it has expanded.

"Populist leaderships have economic implications in relations between countries. These movements tend to favor economic fragmentation, the establishment of barriers to trade, immigration and investment, thus favoring the balkanization of the world," he emphasized. to add that, in addition, it weakens the institutions and promotes the loss of legitimacy of the established order.

In addition to political extremisms, Gual has highlighted the great social, technological and economic challenges such as digitalization and climate change. Given that, he has appealed to companies' commitment to get involved in the fight against these challenges. In his opinion, they impact the strategy of the companies. And he has wondered what is the role of the business world in this challenge. "As business leaders we have a responsibility and a commitment to society, we cannot stay out of the way. We are at a time when the legitimacy of the system is at stake and we must contribute to its sustainability. Our mission is to contribute to progress of the whole society and the financial benefit of our customers. But companies must go beyond profitability, the objective is to support society and profitability will be the indirect result, "he said. Gual's message coincides with the one recently made by the president of Santander Bank, Ana Botín, to put the social function of companies ahead of obtaining benefits.

The president of the financial institution has added to all that that companies must flee short-term, because it tends to be harmful. "They do not invest in technology or new products; while long-term oriented ones favor the productive model and tend to have more benefits and give return to shareholders," he concluded.

The president of the CEOE, Antonio Garamendi, for his part, has once again insisted on the need for, once the elections are held, the political groups "sit at a table and start talking about the issues that unite them and not what separates them ", in reference to reforms such as pensions or education, in which he called for dual training.

The business leader has affirmed that it is the "key moment, it will be the start for things to go well" and has stopped in the importance of the industry being promoted as the engine of general activity. In addition, it has drawn attention to fiscal policy. "Beware of taxes," he said in clear reference to the possibility of increases being made when the employer asks otherwise. "Companies, apart from billing, are dedicated to managing and the Government must help," he has completed while recalling two problems in the Spanish economy: the submerged, which reaches 22%, and absenteeism.

He has also influenced, like Gual, in the role of the company and, at that point, he has asked that it be put in value from the school, that the image of the evil man that is given to the businessman in the television series and even is not transferred cartoon. "We have an obligation to be optimistic, those who say that everything is going great or those who say that everything is going wrong are not worth me," he said.