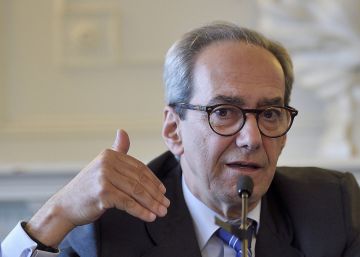 Carlos Torres, president of BBVA, will renew the council at the shareholders meeting to be held in Bilbao on March 14. It will be the first modification since he came to command in January 2019 and will dispense with José Manuel González-Páramo, signed in 2003 by former president Francisco González, and former ECB adviser. The historic Tomás Alfaro and Carlos Loring will also leave. They will be replaced by the Portuguese Raúl Galamba, from McKinsey, Carlos Salazar, Mexican businessman, and Ana Revenga, from the BBVA Microfinance Foundation.

One of the new signings is Raúl Galamba de Oliveira (Portugal, 1964), who was responsible for Spain and Portugal for McKinsey, a firm in which Torres worked, although he was not hierarchical superior. Two other counselors were also defeated, but they will be re-elected: Lourdes Máiz Carro and Susana Rodríguez Vidarte, independent and external directors, respectively.

The most striking output is that of José Manuel González-Páramo, signed by Francisco González in 2013 as executive advisor to take care of the Regulation direction after having been an advisor to the European Central Bank (ECB) for eight years. González-Páramo was in the pools to reach positions of great relevance in the entity since he was an executive director and was considered a luxury interlocutor with the supervisor of Frankfurt. González-Páramo will be an external advisor to the bank and its current functions, Institutional Relations and Study Services Coordinator, will be assumed by Roberto Albadalejo, responsible for the president's cabinet.

In addition, the historical Tomás Alfaro, born in 1951, who was appointed advisor in 2006, and was a master in Economics and Business Administration from IESE and professor of Finance at the Francisco de Vitoria University. Carlos Loring Martínez de Irujo also leaves, born in 1947, appointed in 2004, member of the Management Committee of the Garrigues law firm, lawyers of the entity and who are responsible for the defense of the bank in the BBVA-Villarejo case.

Different market sources pointed out the difficulty of renewing the council in judicial process on the retired commissioner José Manuel Villarejo, which has led to the imputation of the bank and 12 of its executives. Finally the vacancies will be filled with the aforementioned Raúl Galamba, appointed this month president of CTT Correos de Portugal, although he has developed his career at McKinsey, with special dedication to financial services, according to the BBVA note. He was appointed head of Spain and Portugal in 2005 and has been stationed in Lisbon, Madrid, New York and Hong Kong.

Carlos Salazar (Mexico, 1951), is president of the Business Coordinating Council of Mexico, similar to the Spanish CEOE, since January 2019, coinciding with the arrival of Andrés Manuel López Obrador, president of Mexico. Until 2017 he was CEO of FEMSA, a leader in the beverage and retail sector in the North American country. The Mexican subsidiary contributes almost half of the annual benefit of BBVA.

Finally, Ana Revenga Shanklin (Spain, 1963) will be incorporated, who is already a member of the BBVA Microfinance Foundation, and has held different positions at the World Bank, until 2017, as deputy chief economist.