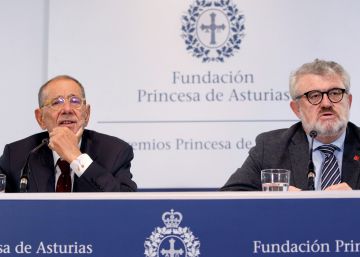 There are hidden lessons in every corner of the Prado Museum. On its walls hang master classes of history, sociology or religion. The brushstrokes of El Bosco draw a treatise on paradise, hell or creation; and the lines of Joaquín Sorolla reveal the risks that a young fisherman could run in 1894. There are solemn and other everyday stories for children and the elderly. But the halls of the Prado also remind a greater teaching of all Spaniards and, especially, their politicians: the importance of consensus. The same that reached the jury of the Princess of Asturias Awards to grant him, just in the year he celebrates his bicentennial, the Communication and Humanities award, for his "conservation and dissemination of one of the richest artistic heritage in the world."

Everything from that State pact on the management of the museum a quarter of a century ago. “It was a great idea. The Prado has advanced faster and is more present in national and international life. It is good that in this country we are able to reach agreements. There is a time to fight, in the electoral campaigns, and one to collaborate, ”Javier Solana, president of the patronage of the museum, defended Thursday in Oviedo. Perhaps the memory of that milestone serves to shake today's impasse. The Prado, at least, wants to point out the good path: while the blockade, by definition, does not let it move anywhere, that agreement He pushed the museum into a career of success. He is the best known in Spain, the most visited and is “of all”, as Solana and Miguel Falomir, director of the Prado reiterated. As icing on so much joy, its restoration area has also obtained today the National Award for Restoration and Conservation of Cultural Property, which is annually assigned by the Ministry of Culture.

To reaffirm its value, and perhaps to thank so much recognition, the museum has deployed projects of all kinds in Oviedo. Its leaders often boast a modern art gallery, which protects paintings from centuries ago while wondering how to take advantage of tomorrow's technology. And they have offered these days a wide tasting of it: on the one hand, the Museum of Fine Arts of Asturias hosts the exhibition Austrias and Bourbons: Portraits of Princes and Princesses of Asturias and Kings of Spain, with a selection of works from both centers, as well as a conference on The places of the Prado; on the other, in the old arms factory of Oviedo an audiovisual creation is shown that gives life to the paintings of El Bosco, a tribute illuminated to the christs of the museum, a recreation of great works through gastronomy, haute couture or theater figurines, and even The Prado Radio, a show that mixes drama and visual narrative from five pieces in the collection.

At once, the art gallery prepares the end of a key year, which also served eight decades since the collections returned after the Civil War. In November, the Prado will host a highly anticipated exhibition of Goya's drawings. And, at the end of December, he hopes that the influx data will give him another smile. In 2018, the Madrid headquarters hosted about 2.9 million visits, the second best figure in a decade, after the 2016 record. But provisional numbers indicate that a historical mark in 2019 is no utopia.

The Prado also needs that income, for its flagship project: the rehabilitation and incorporation of the Kingdom Hall, designed by Norman Foster and Carlos Rubio. “In the last 25 years we have experienced different extensions, but focused on restoration workshops, warehouses, temporary samples, libraries or archives. None was intended to provide the museum with a space to house more works of art. We have pictures saved with enough quality to be exhibited, about 250 works that the public cannot see now could be added. And we have a historic building from the 17th century. In addition, the works at the time were commissioned just for that space. It will create a unique environment in Spain and one of the few of that nature in Europe, ”said Falomir.

But for that, the museum needs signs of life from Parliament. The budget project lying in February included an endowment ad hoc of five million: without it, and with the Government in operation, the Prado has also launched the works, with the 5.2 million remnants it accumulated in the last two years. However, the total cost exceeds 40 million and the museum, that self-finances between 60 and 65% of its expenses, can not and does not want to face it alone. Hence the inauguration, initially planned for 2021, has already been delayed to 2024. “As a public institution that we are, logically, instability affects us. To us and 90% of the country, ”Falomir said. And Solana added: "The duration of the works will depend on how quickly the State Budget is approved." For now, it is impossible to happen until early 2020. Then, it will depend on the government. And from an ancient art, which the Prado knows but Parliament has forgotten: that of the agreement.

Goya 2020 Awards: Last minute of the winners and the red carpet, live

Long live the Pepa! (although absent)