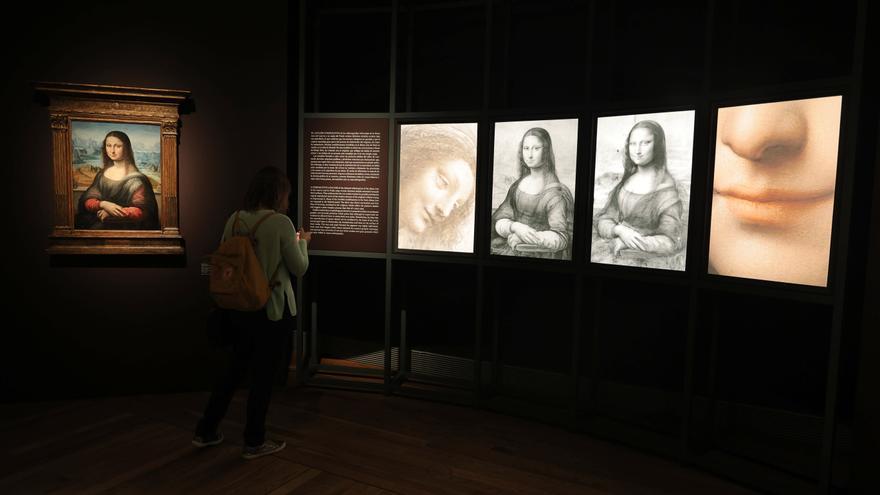 The Prado Museum enters the workshop of Leonardo da Vinci with a sample that collects works of his best students. The exhibition brings two of the most famous copies face to face: of the enigmatic 'Mona Lisa' and the controversial 'Salvator Mundi'.

The exhibition, in a small format, is the result of the studies that the art gallery has carried out since it discovered that it housed a copy of the Mona Lisa (in 2012) -all a media commotion- that came out of the same workshop as the original, it was painted to the time and under the supervision of the genius by one of his students.

"Leonardo and the copy of the Mona Lisa. New approaches to the practices of the Vinciano workshop " It can be seen until January 23, 2022 in Madrid.

"La Gioconda del Prado", as it is now commonly known, it is not "a casual copy" but rather "is part of the teaching and production gear of the Da Vinci studio ", argues Ana González Mozo, a researcher at the Prado Museum, and who has carried the burden of studying the work of the Madrid museum since its discovery.

Leonardo Da Vinci's workshop, he explains, was huge. It is made up of numerous artists, a "Swarm of students and disciples", according to testimonies of the time, that they hovered around the artist while he painted.

The author of the copy of the "Mona Lisa" that the Prado treasures is still unknown.

It is known that it is the same as that of the "Salvator Mundi" from a private collection, which is also in the show, and that it bears an astonishing resemblance to the famous and controversial work sold in New York for 450 million dollars to to Abu Dhabi.

The painter of both works must have been a person "very close" to Da Vinci according to the data provided by the Mona Lisa of Madrid.

The X-rays of the Madrid piece reveal several modifications similar to the original work. In all likelihood they were painted at the same time, so it seems that he was a person "who spent a lot of time with the teacher," according to the expert.

A man photographs one of the samples in the exhibition 'Leonardo and the copy of the Mona Lisa. New approaches to the practice of the Vinciano workshop '. EP

Much more than copies

The pejorative nuance that the copy has today cannot be carried over to the Renaissance.

"Sometimes they were more valued than the original works themselves", has argued Miguel Falomir, director of the Prado and who was head of the Italian Renaissance Painting department at the time the work of the Madrid museum was discovered after removing a black background that had been added over time.

The work has been in the museum since its foundation, as part of the royal collections and was always exhibited in the room, which gives an idea of ​​the quality of his technique.

The method with which Leonardo's students learned to paint was by copying, yes, but not in the sense that is understood now, trying to make an identical image, but trying to emulate how the volumes had been resolved without losing the style of each one.

"It was not a superficial copy at all," explains the researcher.

Research in recent years has helped unravel what Leonardo Da Vinci was like in his role as a teacher. It has been found, for example, that the copies that his disciples made in the workshop were not only made of paintings on which the artist himself worked, but also cardboard -final drawings- or even undeveloped ideas.

The latter is the case of "Leda", a beautiful painting from the Galleria Borghese that has been included in the show, also by an unknown author, and which is made from a very basic drawing by the artist.

Sometimes it is also probable that Da Vinci himself was the promoter of some of the paintings of his disciples, according to all studies.

A witness of the time speaks of the genius at times "suffered from a brush," was blocked and could not paint. "It would be because of his perfectionism or because his head was faster than his hand, but there are times when he was unable to paint and asked his students to do so", explains the researcher.

It is known of two works in which the artist intervened those paintings of his disciples a posteriori, both copies of "The Virgin of the spindle."

La Gioconda del Prado also has modifications, but they are not from the genius of the Renaissance but from the anonymous painter himself. "There is nothing more tempting to try in an intervention by Leonardo, but we did not see it then (in 2012) and we did not see it now", the director of the Prado has pointed out about the Madrid Mona Lisa.