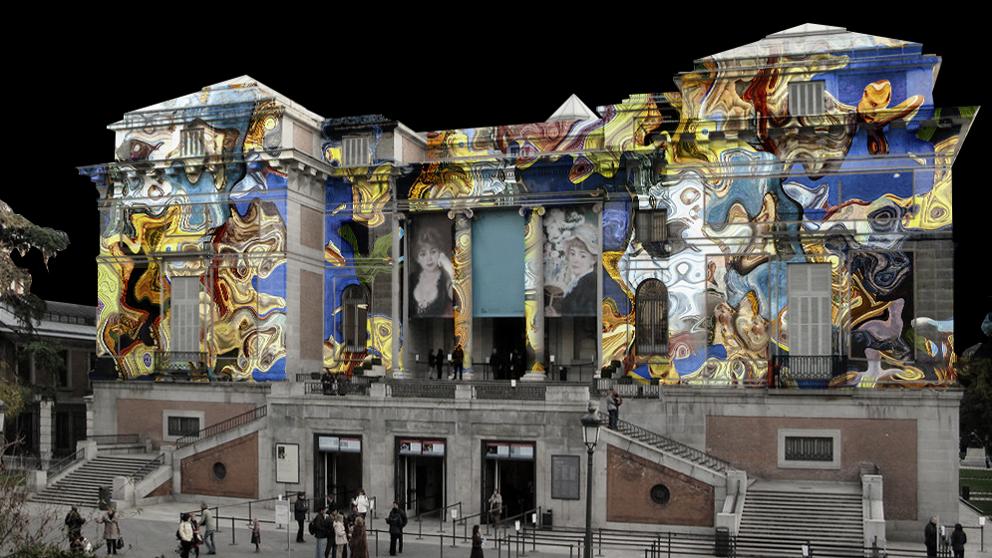 The Prado Museum wants to close its Bicentennial in a big way, literally. Between this Thursday and Sunday, December 15, the gallery will show its great treasures through two projections on its facade: one of video mapping which will offer a broad perspective of the collection, under the title Refraction: from chaos to stillness, and other visual effects by Daniel Canogar in which the masterpieces appear liquefied and blend in what the artist calls Amalgam The Prado.

The two creations with which those responsible for the pinacoteca take chest of its two hundred years of history will be exhibited in two daily passes of 35 minutes, at eight in the afternoon and ten at night on each of these four days.

At video mapping paintings of the main teachers del Prado, "but not with his most visited works but with those that, being less recognizable to the general public, are essential pieces to understand the evolution of painting and society," he said yesterday Marina Chinchilla, Deputy Director of Administration of the entity.

The show features his own soundtrack, composed by Olivier Arson, winner of Goya 2019 for best music for ‘The Kingdom’

The show features his own music, composed especially for the event by Olivier Arson, winner of Goya 2019 for the best soundtrack for the film
The kingdom
. The score will be performed live by an electronic musician, a string quartet and three flutists with their orchestra conductor. The music will be synchronized with the projections through software that will make vibrate and dance the images to the sound of the chords.

Refering to Amalgam The Prado, its own author presented it yesterday as a "respectful daring" in which history is connected to the present through the abstract expression of the "chain of influences”Between artists, through paintings that mix with each other. The visual effect of smoothie of the works has been carried out by means of an algorithm created in the study of Canogar.

Another initiative included in the closing of the celebration of those two centuries of the Prado is the creation of a
time capsule
in which the Museum will collect samples of the materials generated during the Bicentennial year, such as catalogs, brochures, the commemorative coin minted for the birthday or the lottery ticket created for the same reason.

All these elements will be introduced into an urn that will be deposited in the Museum's warehouses with the idea that it will be opened within another hundred years. In addition, during the 12th to 15th of December, the Prado will host an installation in which visitors who wish may leave recorded testimony of their vision of the institution.

From Friday to Sunday, admission to the museum will be free during its opening hours, both for the permanent collection and for temporary exhibitions. They are the days of open doors that will end Prado’s birthday.