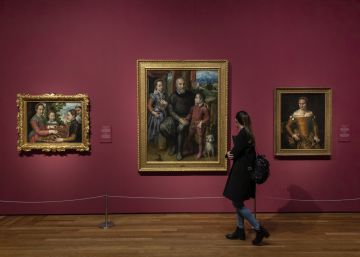 They were not the first to be considered artists, but we can talk about two undisputed pioneers of Western art. The Italian Sofonisba Anguissola (Cremona, 1535 – Palermo, 1625) and Lavinia Fontana (Bologna, 1552 – Rome, 1614) were two women capable of ascending the steps that lead to the floodgates of the club of geniuses, formed almost exclusively by men . The Prado Museum, which already in 2016 it opened its doors to flamenco Clara Peeters, now widens the celebration of its bicentennial with the two most important artists of the European Renaissance. With the exhibition Story of two painters, which include 65 works from about twenty European and American collections, it is shown that there were different ways of understanding the art of painting. The exhibition, which opens today Tuesday, can be seen until January 2.

Leticia Ruiz, head of the Spanish Painting department until 1500, is the police station of a project with which the Prado considers that the glass ceiling is weakened. Both Ruiz and Miguel Falomir, the director of the institution, say that the presence of women in the art gallery is already a fact, although it is undeniable that the figures of the permanent collection cannot be compared with those of male artists. Of the more than 8,100 works that Prado has (about 1,300 in the permanent collection), 69 belong to women (33 are from painters; 12 from contemporary artists as a result of donations and 24 from artists and assistants of the lithography workshop), and 12 are exhibited (seven in the Villanueva building and five in this temporary exhibition). In the warehouse 16 paintings are deposited and 18 more are distributed in different institutions.

Born in Italy two decades apart, it is not clear that the painters got to know each other, although Lavinia Fontana did have knowledge of Anguissola's work. Both share a taste for portrait and self-portrait and a fondness for drawing. The two achieved success in their time, although after their death they were relegated to oblivion. When historians verified that a work was done by an author, the economic price fell. Anyway, Leticia Ruiz remembers that the curse of oblivion after having triumphed in life has also suffered painters, as was the case of Caravaggio.

The sample starts with a biographical tour of the two painters from their self-portraits. From Anguissola It is said that both when she painted herself and when she portrayed others, she liked to recreate moments of everyday life. Also that defined the personality of each character with a book or with a musical instrument. Very active in the court of Felipe II, where she arrived in 1559 as a lady of the company of Queen Isabel de Valois, her position overshadowed her artistic work because, as the curator explains, “there was no comparison between being a painter or a great lady of the Cut".

De Lavinia Fontana, daughter and wife of painters, says Ruiz who managed to be one of the most recognized artists of his time thanks to becoming the official painter of the court of Pope Clement VIII and Paulo V. There is evidence that he made 135 works, of which 32 signed and dated paintings are preserved, which makes her the woman with the largest number of pieces registered before the 18th century. Like his admired Anguissola, the clothes of his portrayed are full of details that speak of the category and the tastes of the character. The play Portrait of lady with four young people. The bride's arrangement (around 1600) gives an idea of ​​that love for detail.

It may be in mythological themes, however, where Lavinia Fontana emphasizes her most groundbreaking character. its Minerva getting dressed, from 1613, with which the exhibition route starts, shows the naked goddess transformed into a Venus; a show of boldness that is repeated almost at the end of the tour with the spectacular canvas Mars and Venus, from 1595, lent by the house of Alba. "Fontana was the first artist who made mythological compositions, where in addition to developing his capacity for invention, he had to go into the representation of the nude, a land banned from women," explains the curator, who concludes by recalling that, despite prejudices that we assume, Fontana was an advance in all of her time. She had an example of conciliation in her own home: mother of eleven children, although only three survived, she was married to the painter Gian Paolo Zappi, an artist who worked in the workshop of his father and he collaborated in housework.