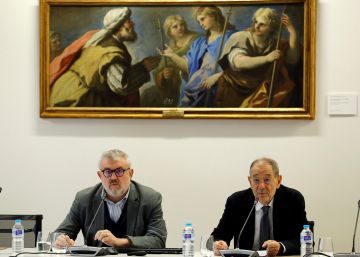 In the absence of a week of parties for the end of the year, the Prado has already broken all the records of visits it recorded when in 2016 it added 600,000 people for the Bosco exhibition. Thanks to the Bicentennial, has achieved a historical maximum of 3,388,102 entries for both the permanent collection and the temporary samples. Although 1.5 million have accessed for free, box office sales have exceeded 21 million euros. At this time, both donors and sponsors have contributed significantly to the celebration and the impacts on the media and social networks in Spain and abroad have been permanent. But, with all this, the most important thing for those responsible for the museum is the intense connection with the citizenship that has been experienced during the 13 months during which the birth of the museum has been celebrated.

All these data have been released today in the Casón del Buen Retiro. Javier Solana, president of the board of trustees, has put great emotion in ensuring that beyond the indisputable figures of success, the most important thing has been the affection that citizens have shown towards what is their most beloved museum. "This is a museum not only in Madrid, but in all of Spain, which comes out as a better person."

Miguel Falomir, director of the Prado, highlighted the enthusiastic response that has been given to the more than 100 events on which the bicentennial has been held, between exhibitions, congresses and symposia in which world class specialists have participated.

Between November 19, 2018 until December 15, 2019, exhibitions have been held that, in Falomir's opinion, have changed their conception. On the one hand, works never exhibited in the museum have been shown, but always supported by research theses that have enriched the knowledge of visitors. They started with a tribute to the institution's own history, Prado Museum 1819 – 2019 and they continued with great samples like Alberto Giacometti in the Prado Museum, Fra Angelico and the beginnings of the Renaissance in Florence, Rembrandt, Velázquez and Vermeer. Related looks, Goya. Drawings. Only the will is left over, Sofonisba Anguissola and Lavinia Fontana. Story of two painters and The broken. Can't lookr. In another minor league, but with great relevance, temporary exhibitions have been held as Twelve photographers, The paper master or The resting cabinet of his majesties. The latter will remain permanently in the museum.

For the director, all the initiatives have been equally important, but if I had to highlight one, he points out the itinerant project Touring Spain and The meadow in the streets. Thanks to these projects, all the autonomous communities except Madrid and the cities of Ceuta and Melilla have received for one month one of the Prado's masterpieces made by Tiziano, El Greco, Velázquez, Zurbarán or Murillo. “The entire program and, particularly, this initiative, have raised the nation’s self-esteem. The response has been exciting. In Teruel, for example, where we exposed Titian, we had more than 9,000 visits ”

With 2020 comes normalcy to the life of the museum and the first concern is the budgets that are still pending that, finally, there is a government in Spain. Only then can it be launched in a large project of the Kingdom Hall where you can hang the more than 200 paintings that Falomir believes should be available to the public permanently. Loans with other international museums will then resume for large exhibitions such as those prepared in Italy dedicated to Rafael. At the moment, there are no plans to travel part of the collection to raise funds as was done in previous years. And to know the new exhibitions we will have to wait in mid-January.

Loreto Socorro: “I try to tell in a close, natural way, as in a conversation”