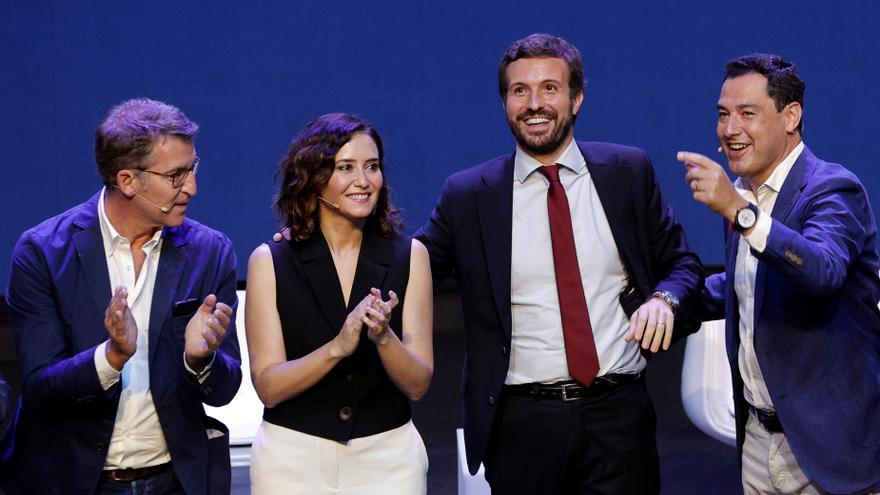 Pablo Casado gave the slogan hours after the coalition government reached an internal agreement on the exact terms of the rental price regulation that will regulate the first state housing law. The text was not yet known, but the Popular Party already knew that it would reject it. “Let each one do what they want with what is theirs,” he said on October 6 during an interview on Telecinco. And announced that the law “will not apply” where they govern, since the norm, whose approval process has just begun, allows municipalities and autonomous communities to apply or not the measures it includes at their free will.

The five autonomous communities that the PP governs have aligned themselves with Casado’s slogan. 21.8 million Spaniards, 46.1% of the total population, will thus be left out of the main rent control measures contemplated by law. Not only from the price limitation in stressed areas, but also from the tax benefits of up to 90% provided for landlords. On the other hand, owners who choose to have their properties vacant and not put them on the rental market will not see their Real Estate Tax bill overloaded.

The first to join Casado’s side was Isabel Díaz Ayuso. It is not known if by companionship (days before they had dramatized a peace that began to crack as soon as the lights went out), or by competing with his leader of the ranks to see who is more opposed to the Government of Pedro Sánchez, of whom he is openly antagonistic whenever he can.

The president of Madrid did not even wait for the prefabricated argumentation that every day they distribute from Genoa to leaders and spokespersons. Even before the PSOE and United We can announce their agreement, she already described the option of regulating rents as a “direct attack on private property”. Since then he has held the same position. “We will not apply the statements of this rule,” he said after the Council of Ministers approved the draft law.

In this matter, the nuances within the PP do not exist, or they are very light. The president of the Xunta, Alberto Núñez Feijóo, closely followed the doctrine of the national leadership. Rejected the law a priori and described it as an “outrage”. Of course, he made it clear that neither he nor anyone knew then the government text. An ode to sincerity, since the draft did not pass its first screening in the Council of Ministers until last Tuesday, October 26. 20 days after all the PP expressed its most absolute rejection of the norm. The Government expects it to be definitively approved in the second half of 2022.

Now, the bill is already public. And the rejection of the autonomies and municipalities governed by the PP remains in the same terms as before knowing its content. From the Department of the Environment, Territory and Housing of the Xunta they assure elDiario.es that the Galician Government “does not plan to limit the rental price.” “We regret that the central government has approved the draft without first consulting the measures to be promoted with the autonomous communities, which have competencies in this matter,” they point out from the same department, which announces “allegations in the current process of public information.”

From the Xunta they wield the usual criticisms against the law: the “commitment to incentive measures and not to restrictive ones” that “discourage” and the complaint that the “legal security that is being clearly affected”.

Nor will the measures of the standard be implemented in Andalusia. The Secretary General of Housing of Andalusia, warned the same Tuesday: “We are not going to apply this housing law”. Alicia Martínez came to confirm what her boss, the Minister of Development, Infrastructure and Land Management, Marifrán Carazo, had already anticipated at the beginning of October, who denounced that instead of consensus with the autonomous communities, has been yielded to the “communists” and it has opted for measures that “intervene in the market and imply an outrage on private property.”

Nor was Fernando López Miras left behind. The president of Murcia announced a month ago that he will block the law in the Region. “The regional government is committed to the freedom of the people, to free competition, to the market economy, because each one works, pays little taxes and can do whatever they want with what they have earned with the sweat of his forehead, “he said, without deviating a millimeter from the Genoa speech.

Another of the supposedly moderate and Christian Democrat profiles within the PP, Alfonso López Mañueco, also settled the debate on October 6. In his Twitter account, he said he rejected “interventionist policies” and defended the management of the Junta de Castilla y León in terms of housing.

Nor does it seem at the municipal level that the PP is going to apply the regulations, once it is approved. According to the text, it will be the city councils that will have to request regional governments to declare a stressed area in order to limit rental prices. Without this prior step, even in those regions where the Government chooses to apply the norm, the mayors will have in their power to start the process.

Madrid returns here to become the spearhead of the PP. José Luis Martínez Almeida went from saying that he was not going to do “anything” to regulate rental prices in Madrid, to promoting a plan that benefits investors from the private sector to whom he has made available about 150,000 square meters of municipal land for the construction of 2,500 apartments for “affordable” rent. The plan was presented by the Urban Development delegate, Mariano Fuentes, from Ciudadanos, who said that the flats will begin to be built, predictably, “after the summer” and the City Council will establish a maximum rental income that will always be lower than current prices. market of each area.

Last Wednesday, during the Plenary of the City Council, Almeida insisted that he was not going to do “anything that the left proposes”, because he considers that the Government’s law is interventionist and they are failed policies. Among other things, and beyond the regulation of rental prices, he warned that he will not penalize the owners of empty homes in Madrid with an increase in the Real Estate Tax (IBI).

But, and beyond Madrid? Some PP presidents can find themselves with pressure from their main cities to apply the rule. In Murcia, for example, the mayor of the capital, the socialist José Antonio Serrano, assured that the rule “will contribute to regulate prices and apply bonuses, in addition to helping groups such as young people so that they can become independent.”

Paraphrasing his colleague from Madrid, Serrano pointed out: “As a politician and mayor, I applaud this law, what is not worth doing is doing nothing.” The PSOE governs the city of Murcia in coalition with Ciudadanos, whose national leadership does reject the new norm.

The Law for the Right to Housing that has now started its processing is that the competences in the matter are mainly at the regional level, as expressly established by the Constitution. Thus, the key to the regulation is the declaration of “stressed area”, at the request of the municipalities, and for this, two requirements have to be met: that the cost of the mortgage or rent exceeds 30% of the average income of the homes in that area; and that the price of houses has increased by more than 5%, with respect to the CPI of that Community. A statement that will be necessary to apply small homeowner tax deductions which includes the text approved by the Government.

Thus, owners in stressed areas in communities that do not declare them as such, as well as municipalities that do not request it, will not be able to benefit from tax incentives. For example, small owners in these areas who rent their flats and sign new contracts will have tax discounts.

What city councils will be able to do, apart from the regional governments, is to raise the IBI to the owners of empty houses. But there the PP has also cut the wings of its councilors. An example is again Madrid, but not only. The mayor of Santander, Gema Igual, said after knowing the agreement of the coalition government: “That Pedro Sánchez does not count on me to punish the people of Santander.” A day later, on October 7, he specified: “The IBI will not be raised here.” All a declaration of intentions of how the party will embrace one of the star laws of the coalition government.

With information from Beatriz Muñoz, Carmen moraga and Santiago Cabrera.