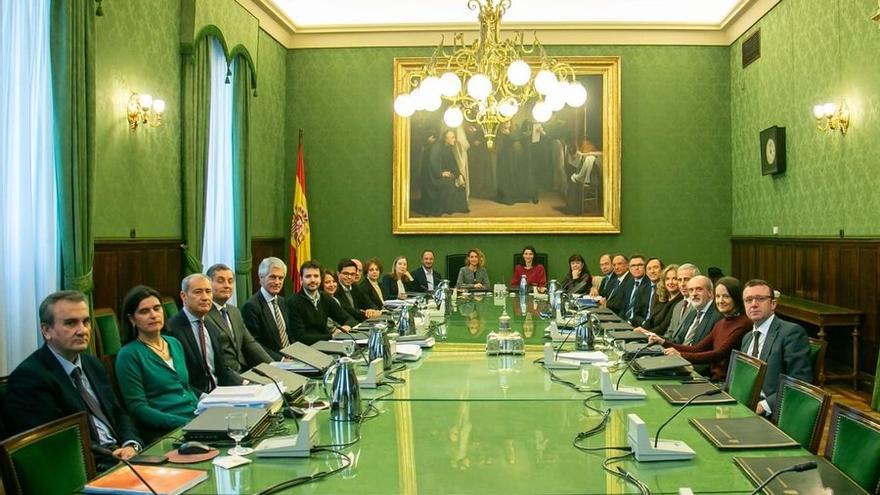 The deputies and senators will soon have to abide by a code of ethics so that their activities can be controlled and are more transparent, avoiding little exemplary attitudes that many of them have incurred throughout all these years of democracy. The debate, which was already opened two years ago, has now been used by the PP to force that among those norms the obligation of all parliamentarians to “comply with and respect the Constitution, and the rest of the legal system,” is included. This has been interpreted as a response not only to the formulas used by the nationalists and independentistas when taking possession of their minutes, flouting that precept, but also to the critical opinions that some deputies of United Podemos have expressed about the monarchy and the king.

The joint tables of both Chambers will meet this Thursday to definitively approve this Code of Conduct that was promoted by the groups in February 2019, with the PP leader, Ana Pastor being president of the Lower House, but which had never been completed. nor to be applied due to the brevity of the last two legislatures. The draft of the text, which has been debated this Tuesday by the Bureau of Congress and to which elDiario.es has had access, has been prepared by the General Secretaries of both Chambers and incorporates some modifications with respect to the previous one.

These modifications refer precisely to the aforementioned compliance with the Constitution, and to the creation, “at the proposal of the two presidents of the Chambers [Meritxell Batet y Pilar Llop]”, of a single Office of Conflict of Interests of the Cortes Generales. But the main workhorse has been compliance with the Constitution, a point that had been eliminated from the first draft at the direction of the lawyers when considering that the Regulations of the Two Chambers are rules of a higher rank and it was unnecessary to include it in a Code of Conduct, which is designed for other purposes. Casado’s party, however, has demanded that those lines be restored. Thus, point 1 of article 2, in where the ‘Principles’ of this regulation are listed, it is worded as follows: “In the exercise of their functions, the members of the Cortes Generales will observe the following general principles of conduct: integrity, transparency, diligence, honesty, responsibility and respect, both the other members of the Chambers as well as the general public. As well as compliance with and respect for the Constitution and the rest of the legal system, especially the Regulations of the Chambers and the resolutions that develop them “.

Despite this, this is not going to prevent the deputies who want to go outside the norm when it comes to abiding by the Constitution in taking possession of their minutes, as has happened in different legislatures. In May 2019, several deputies from nationalist and independence groups – among them Oriol Junqueras – already used compliance formulas, making allusions to the existence of “political prisoners” or to self-determination of Catalonia. The episode was repeated in December with other parliamentarians of these groups after the electoral repetition, which caused the PP, Ciudadanos and Vox to demand that Batet not accept these formulas as valid. But the Board of Congress did not find a collision with the Magna Carta or with the doctrine of the Central Electoral Board. Those of Abascal, despite the fact that they had used the phrase “for Spain, yes I swear”, even went so far as to present an appeal of unconstitutionality.

They must report their work for the last five years

Another of the novelties of this code of ethics is the obligation to inform in the Register of Interests that will be constituted “in each of the Chambers”, of the activities that they have developed during the last five years before being deputies or senators so that refrain from participating in those debates that they consider necessary. In the event that they have been employed, they must disclose the name of their employers and the sector of activity. Before, all this was “confidential”, a precision that no longer appears in the draft of the new text and that has been replaced by “in any case, the regulations on the protection of personal data will be followed.” These statements with the economic interests of each parliamentarian will be published on the web pages of each Chamber.

Article 8 regarding the creation of a single Office of Conflict of Interest of the Cortes Generales has also been modified and expanded. “Its purpose – it is explained – will be to resolve the doubts of interpretation generated by the application of this Code, which may be raised both by the parliamentarians and by the Tables of the Chambers”. “In any case, the Office will act with total reserve regarding the doubts raised. The Office of Conflict of Interest of the General Courts will have its headquarters in the Congress of Deputies and will be headed by a member of the Body of Lawyers with experience in the matters. attributed to it in this Code. He will have the rank of Director of the General Secretariat and will be appointed by the Boards of both Chambers jointly, at the proposal of the Chief Counsel of the Cortes Generales “. Another added paragraph is that which indicates that the Office “will have the advice of the legal services of the Commissions of the Statute of Deputies and of Incompatibilities of the Senate, as well as a support unit for the execution of its functions that will be integrated by Cortes Generales staff.

According to parliamentary sources, this body, however, is not granted functions of verifying the veracity of the content of the declarations included in the Register of Interests or of the declarations of assets and assets made by the deputies and senators at the beginning of its mandate, unless there is a specific complaint.

The Code of Conduct makes it clear that parliamentarians “may not accept gifts, favors or services that are offered to them because of their position or that they may be understood to seek to influence their parliamentary work.” That was already in force in Congress, but now it is specified that “their family environment” will not be able to accept them either and the limit of 150 euros is established on the value of the gifts they receive.

The conditions on their trips are also toughened and they are forced to make public their agendas and the meetings they have planned “with representatives of any entity that has the status of an interest group”, that is, with lobbies or pressure groups. The Chamber trusts the “responsibility” of each deputy and senator for the “veracity, accuracy and timeliness” of the information they provide in their biographical data and in their agendas.