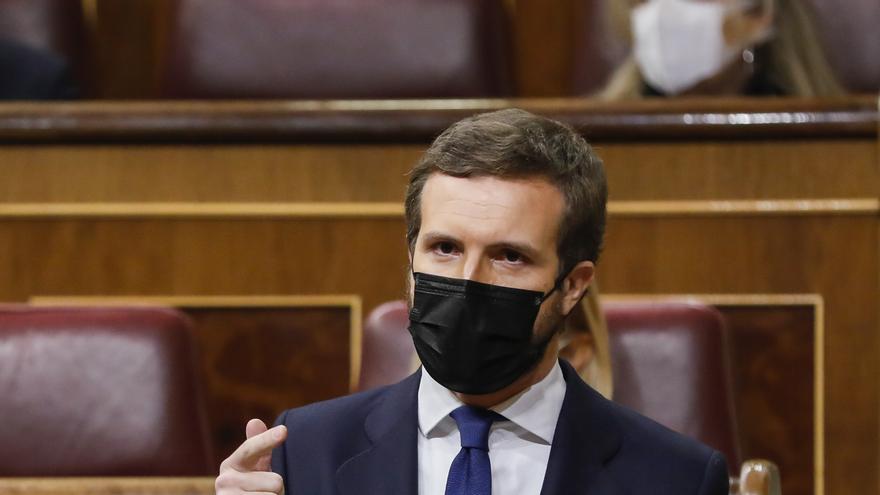 The PP has hosted this Wednesday the judgment of the Supreme Court that has ratified the sentence to the party for benefiting from Gürtel’s corruption, assuring that it respects “judicial decisions” and abiding by the sentence by considering that “the facts are reprehensible. However, sources from the management of Pablo Casado have stressed that the motion of censure against Mariano Rajoy that brought Pedro Sánchez to Moncloa “was based on some paragraphs that now the Supreme Court has eliminated”, by eliminating allusions to box B of the PP.

“Pedro Sánchez will be indifferent to having been president of the Government through an unfair motion based on unproven grounds,” they argue in Genoa 13, who insist that “Sánchez came to power with a motion of no confidence based on a lie and giving lessons of exemplarity “. In fact, the PP points out, “the sentence literally says”: “The party’s authorship as the author of crimes of corruption and irregular prevarication cannot be affirmed.”

According to Genoa, which tries to unmark Casado from the recent history of the PP, “the only deal that the new leadership of the PP had” with the former treasurer of the conservative formation Luis Barcenas “is a threat to sue Javier Maroto and Pablo Casado for call him a criminal. ” In addition, the management insists that “President Casado’s commitment to exemplarity is total.”

The mayor of Madrid and national spokesman for the PP, José Luis Martínez-Almeida, has affirmed for his part that the Supreme Court ruling accredits that the motion of censure against Mariano Rajoy was “unfair” because “the paragraphs are eliminated (from the sentence) who founded it “. “Someone is president thanks to a sentence that was provisional and that now the Supreme Court says that it should not be introduced. This deserves an opinion on the part of the PSOE, because those paragraphs have been eliminated,” he specified.

Almeida understands that the President of the Government, Pedro Sánchez, “is worth reflecting on whether or not that motion was justified”, since “the political responsibilities were paid and now it is proven, unfairly.” In addition, he recalled that “there are 3 councilors of the Junta de Andalucía during the fraud of the ERE who are sitting in the Government of Sánchez. Will they have the decency to dismiss those councilors?”

“La Gürtel does not stop extending its shadow over the PP,” the PSOE has considered instead through a tweet on its official account. “The confetti, the clowns, the luxury handbags, the mariachis, the illegal financing of campaigns … The Supreme Court confirms the condemnation of the PP for benefiting from Gürtel. There are NO more questions, Your Honor”, has settled the party in the Government .

“CONDEMNED for being corrupt and supported by Cs and VOX in order to continue in the same line. It is the PP, friends,” added United We, for its part, through its official Twitter account. “They were not bad apples or individual cases: it is the PP, a corrupt party,” in the same vein, the leader of Más País, Íñigo Errejón.

The publication of the Supreme Court ruling has also coincided with the holding of the Plenary of Congress, in which all the parties have reproached the PP for having ratified the sentence for benefiting from the plot “for profit.”

ERC spokesman Gabriel Rufián has spoken of “poetic justice” since the ruling coincides with the Supreme Court’s ruling on the leaders of the you process a year ago. “It confirms what we already knew, that the PP is a corrupt machine,” said the Republican leader in Congress, who has regretted that the sentence reduces some penalties and that it does not speak of box B, but has celebrated that the PP cannot “come here to say it’s a lie.” “Without a party meeting the requirements to be outlawed is the PP”, has added Rufián, who has assured, however, that it is not the intention of his formation to “outlaw” the conservatives but to “win” at the polls. “The sentence on the corrupters is short, it does not speak of companies, and it remains without explaining to us who is M.Rajoy,” he added.

The Compromís deputy in Congress, Joan Baldoví, has welcomed this Wednesday that the Supreme Court has ratified what was already known, “that the PP is a corrupt party”, and hopes that in future trials for the ‘Gürtel case’ credit party “box B”. The Valencian deputy maintains that if something is already “indisputable” it is that the PP is “the first party of democracy condemned for corruption”, something that should lead them to “look at their own navel” and abandon the “hubbub” that they mount in each Plenary of Congress.