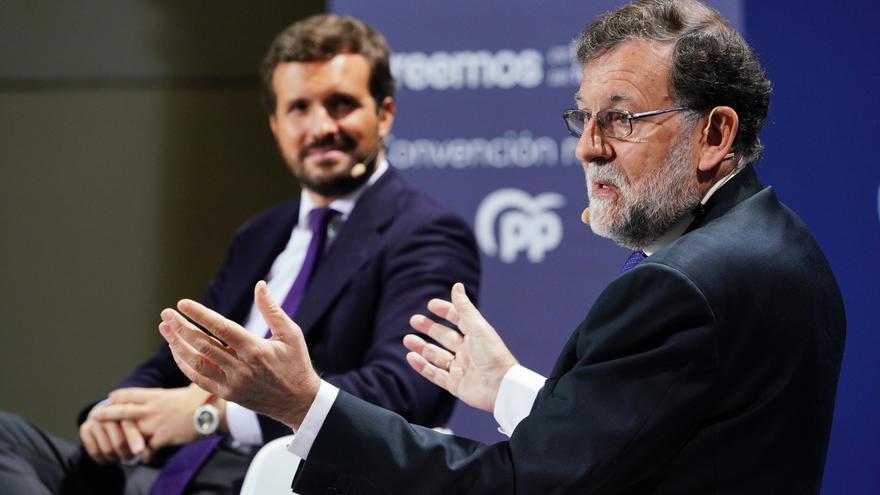 The PP tries to overthrow the first block of the government’s pension reform, which agreed with the unions and employers in social dialogue. It was about first social agreement on pensions in a decade, which cost a lot to achieve and which the Popular Party immediately branded a “great mistake.” In recent days, Pablo Casado’s party has raised its offensive against the legislative project, with the presentation of an amendment to the entirety that asks to return the text to the Government. The party has also brought former president Mariano Rajoy to the fore this Monday, who has raised his 2013 pension reform. The one that Rajoy himself stopped applying at the end of his term, amid weekly and massive protests by retirees against the legislation, and that now those of Casado defend again.

The first block of changes in the pension reform, which is being led by Minister José Luis Escrivá, is part of the commitments made with Europe for 2021 within the Recovery and Resilience Plan. The legislation recovers the annual rise in pensions according to the CPI and repeals the sustainability factor of pensions, so that ends with the two key elements of the 2013 PP reform. In addition, it reduces “improper expenses” of Social Security and contains incentives for the voluntary delay of retirement, among other measures. This block of changes will be followed by more, according to the calendar set by Minister Escrivá.

This Thursday, the Congress of Deputies will witness the PP’s attempt to stop the first part of the reform. The Plenary will debate the amendment to all of Pablo Casado’s, which the PSOE has asked this Monday to be withdrawn so as not to delay the parliamentary processing. The legislation must be reflected in the BOE before December 31, with a important pending fringe: design and include the intergenerational equity mechanism which will replace the PP sustainability factor.

The amendment defends that the Government of the Popular Party “adopted responsible measures” in its 2013 reform, with the pension revaluation index (IRP) –by which pensions only rise 0.25% per year– and through the sustainability factor that linked future pensions to life expectancy. Now, consider those of Casado, “the sustainability of the system is not guaranteed”, so they demand the return of the text to the Executive. The rejection of the PP also points out the lack of debate on the future equity mechanism, since it is intended to be included in the amendment process, which means that it will not pass the same previous procedures as the rest of the bill, such as the Council’s assessment Economic and Social.

It seems that nothing remains of the spirit of political consensus on pensions that was reached less than a year ago in the Toledo Pact commission, which managed to agree on 22 recommendations for the future of the system. Among them, recovering the CPI as a reference to revalue pensions. Are were supported by the vast majority of the House last November, only with the vote against the CUP and the abstention of Vox.

The new climate of differences was already sensed in the appearance in the Toledo Pact of José Luis Escrivá once the agreement was reached with the social agents. The opposition parties, but also their partners in the legislature (and even in the government), made it clear to the minister that there were issues that concerned them about the legislative project. Above all, the future equity mechanism that is still undefined and about which the minister made a controversial statement about a possible cut in the pension of the baby boomers, from which belater retracted. In recent days, other statements by the minister about working to age 75 have again drawn criticism. Escrivá had to specify his words.

The political groups were summoned in the Toledo Pact to discuss the legislative text in the period of amendments, but in the PP they hardened their speech already then. Instead of the usual spokesperson for the ‘popular’ in the commission, Tomás Cabezón, the spokesperson for the parliamentary group in Congress, Cuca Gamarra, spoke the hardest against the minister, with messages warning that this The first package of measures was “the sweetened trailer of what is to come”, which assured that they would be “lower pensions”. Gamarra at the same time defended the 2013 reform, by which internalizing organizations such as the OECD estimated a sharp decline in future pensions in Spain.

From the days after the social agreement, Pablo Casado marked the new speech in pensions. On the one hand, and in the midst of the tensions of the right with the leader of the CEOE for his statements on the pardons of the Catalan independence prisoners, the leader of the PP called the pact reached with the unions and businessmen as a “great mistake”. On the other, Casado defended the “success” of the 2013 pension reform, on which the PP used to maintain a low profile in recent years.

The reason? That the legislation of the PP took to the streets thousands of pensioners every week, to demand the end of the increases of 0.25% and the sustainability factor, after which the Government of Rajoy itself left it without application. He did it to be able to get his 2019 Budgets forward, in an agreement with the PNV. The Executive of the PP agreed to increase pensions according to the IPC and gave a four-year kick to the sustainability factor, which instead of being implemented in 2019, its start-up was postponed until 2023.

Rajoy had to leave Moncloa shortly after due to the motion of censure and, already in the opposition, the PP had not made a prominent defense of its 2013 pension reform. Until now. In the Toledo Pact, the party supported the revaluation according to the IPC, contrary to its IRP, and was aligned with agreeing on a new design of the sustainability factor, as recommended by the parliamentary commission a decade ago.

The PP has brought Mariano Rajoy to the fore on Monday, who has even rejected that pensions rise with prices. The former president of the Government has called for the PP to annul the pension legislation of the current Government when he returns to power. “I suppose you will have to change it,” said Rajoy looking at Casado, sitting next to him. “Then, maybe they will make another strike but you will not have another,” he said.