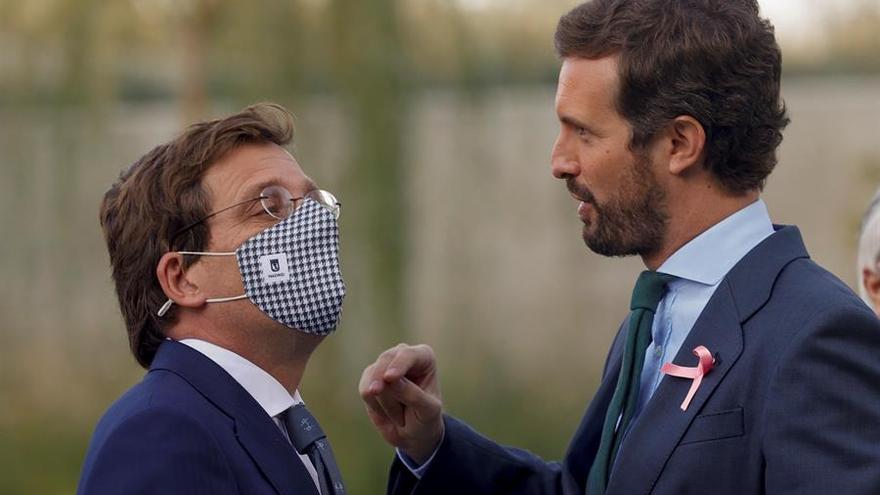 "It's not talking bad about Spain. It's talking bad about what the government is doing, that's what I'm here for." This is how Pablo Casado justified last Monday a new attack by the PP against the management of European funds designed by the coalition Executive. The leader of the opposition went to Brussels, where he again accused the Government of benefiting the administrations led by the PSOE or by nationalists, to recognize almost in the same sentence that both the Commission and the European Parliament already do what he claims : control the aid and the reforms associated with it. Among them, the labor reform of which depend 10,000 million. Despite this, this Wednesday a delegation of PP mayors will travel to the community capital to complain about the distribution of the money, although the Community Executive has endorsed it up to three times, the last one this Monday while Casado was in Brussels.

Casado met with the new president of the European Parliament, anti-abortionist Roberta Metsola. Also with the president of the popular Europeans in the European Parliament, the German Manfred Weber. In a later intervention before the media, Casado precisely gave an example to Metsola's party, the Maltese Nationalist Party (European ally of the PP), for its opposition to the Labor Party government in regard to the management of European funds . He also anticipated that it will be one of the weapons used by Valérie Pécresse, the candidate republicain of the right heiress of Nicolas Sarkozy's UMP, against Emmanuel Macron, in the imminent French presidential campaign.

"Inside the PPE meetings [el Partido Popular Europeo] All the parties that are in the opposition share the criticism," Casado pointed out to justify his continuous attacks against the distribution of funds. "That is what the opposition is for, to improve what is being done wrong," he added.

After his statements, Casado met with the Political Assembly of the PPE. According to the press release distributed later, the situation in Ukraine and Belarus was discussed at the meeting. Also the position of the PPE on the development of legislation in the digital field or the merger into a single party of the two organizations that family policy has in Slovakia. Not a mention of European funds, which will mean a total disbursement of 806,900 million euros mutualized among all the Member States. Much less a cataract of criticism from the Maltese, French, Italian or Bulgarian opposition that Casado mentioned.

Yes with all the desk of the PPE did not address Casado's management of the Government of the funds, nor did it come out that he did so with Metsola -who did not even tweet the meeting with Casado-, first, or with Weber, after. However, for the president of the PP "it is evident that the Government of Pedro Sánchez distributes the funds on a discretionary basis."

This Tuesday, the Ministry of Finance has published an extensive document in which it exposes, program by program, the technical criteria approved in the different sectoral conferences, in which all the autonomous communities participate, to allocate the first batch of aid. Population is one of the key criteria, which is why Andalusia, governed by the PP and Ciudadanos, is the first on the list, followed by Catalonia and Madrid. In fact, the regional administrations led by the PP (five communities out of 17, plus Ceuta) they have taken 44% of the total.

On January 25, the Commission already explained to the PP in a parliamentary response to MEP Isabel Benjumea that Spain receives recovery funds because "the objectives are met." As approved in the European Parliament itself, the money comes in exchange for complying with investments and reforms agreed with Brussels. The aid is distributed a posteriori.

It was not the first time that the European institutions they came out in the face of accusations which, ultimately, cast doubt on their own oversight work. In fact, Poland has already seen how Brussels withholds a portion of the fundsin this case, for failing to comply with a ruling of the Court of Justice of the EU.

But far from being intimidated, the PP delves into the strategy. This Wednesday a delegation of mayors will travel to Brussels popular to denounce what they consider an unfair distribution of municipal funds. The PP emphasizes the distribution of concrete programs to denounce that their Mayoralties receive less funds than others. An exercise of cherry pickingthat is, choosing a series of data that suits you for a story and ignoring the rest.

The mayor of Madrid and national spokesperson for the PP, José Luis Martínez Almeida, will be one of the members of said delegation. This Tuesday he reiterated that his trip "is not an attack on Spain, as the government wants us to believe," and maintained that "when you are talking about figures per capita (from the distribution of European funds) it is seen that the communities governed by the PSOE are being tremendously benefited", informs Carmen Moraga.

"Defending Spain is defending an equitable and adequate distribution of European funds. Equality has to reach us all, regardless of where we live or the party that governs us," he concluded.

But the criticism of the PP to the Government does not stop at the funds. MEP Isabel Benjumea asked this Monday in the European Parliament's Economic Affairs Committee about Spain's deficit and hinted that the control measures contemplated by European treaties should be put in place. "What measures of the fiscal surveillance program do you intend to use to prevent the funds from being misused and that the investments do not finance current spending?" Benjumea questioned.

The Latvian Valdis Dombrovskis, economic vice-president of the Commission, amended the PP again and responded that "several countries, such as Italy, Lithuania and Latvia, have received a warning, but Spain was not among those countries with that notification and call for caution". In other words, not only the distribution of funds, but also the coalition government's accounts do not concern the Community Executive.