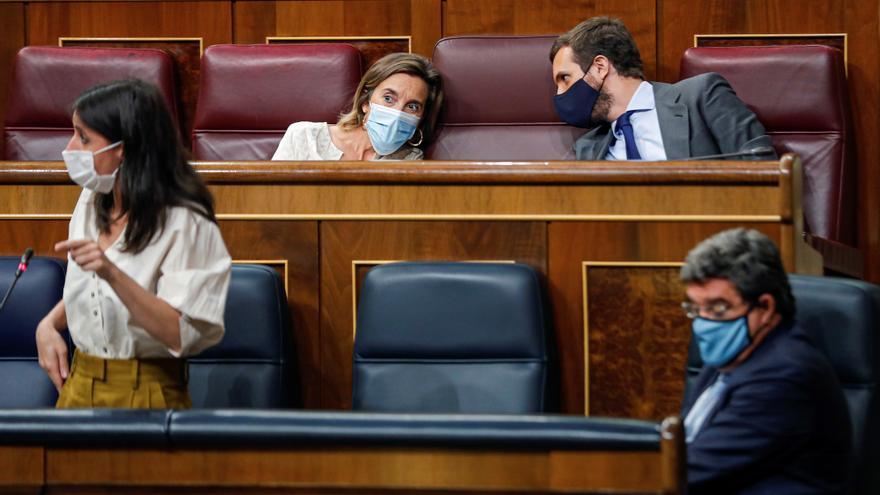 The State Pact against Gender Violence expires at the end of 2022 and the Ministry of Equality has already begun the procedures for Congress to negotiate and approve a new one. The two parties of the coalition government, PSOE and United We Can, announced on Wednesday that they had proposed to the parliamentary groups “updating” the agreement. To all. Sources from the Pablo Casado parliamentary group have assured elDiario.es that their intention is to “give continuity” to the State Pact, but they demand for this that the one promoted at the end of 2017 by the Government of Mariano Rajoy be put into value and that the Irene Montero’s ministry act “effectively to comply with all the measures agreed” in it.

Equality has already sent the congressional groups the draft of the opinion, which must now be debated in the parliamentary committee. The document is the result of the work of the two parties that support the Government. Specifically, from the Secretary of State for Equality, Angela Rodríguez, and the Secretary for Equality of the PSOE, Andrea Fernández. In the previous weeks there have been meetings and contacts with the other parties, including the PP.

From the group led by Cuca Gamarra they point to elDiario.es that they want to “give continuity to the Pact.” Although they also take the opportunity to claim the current document. “Previously,” the same sources continue, “the Government has to act effectively to comply with all the measures agreed in 2017.” The PP denounces “the incoherence” of the Ministry of Equality “because it announces its will to renew the Pact, when it has shown its null interest in developing the measures contemplated in said State Pact, approved in 2017 thanks to the negotiating capacity of the Government of the PP. A Pact that, with 214 measures and endowed with 1,000 million euros for five years, has meant an enormous advance in institutional attention to this problem “.

The current Pact was approved in December of that year. And a few months later there was a motion of censure that led to the departure of Mariano Rajoy from the Government. It was in 2019 when the pact really began to be executed, which in reality must be implemented by autonomous communities and municipalities, mainly. That is to say: the central government provides the money and the territorial administrations execute it. There tend to be asymmetries, since not all act with the same speed or depth when implementing the measures.

The outbreak of the pandemic also hampered the implementation of the Pact by the current coalition government. Last July, the Ministries of Equality, Interior, Health, Social Rights and Justice took the Council of Ministers a battery of urgent measures to stop sexist violence that included measures emanating from the 2017 Pact.

So Unidos Podemos abstained from voting considering the agreement “insufficient”, as stated by the then deputy Angela Rodríguez. One of the reproaches that was made was the low financing of the plans.

Sources from the Ministry of Equality consulted by elDiario.es confirm that “the Government is negotiating with the groups” in Congress and that there is “maximum willingness to return to consensus.” “Both PSOE and United We can want the PP to be in the pact”, settle the same sources.

Within the opinion that will be debated in Congress, Equality has included what they call the “shielding” of the State Pact against Gender Violence. A reform of the law to make it fixed “whoever governs governs” And do not leave it to the discretion of the parliamentary majorities, unless someone in the future proposes to reform the same norm to eliminate that protection.

Equality launched at the end of October the public consultation of the Gender Violence Law to introduce this modification that, if it goes ahead, would avoid having to renegotiate the Pact from time to time, which would guarantee its financial support.

The text of the opinion recognizes that the 2017 pact “was a key milestone” that did not obtain any vote against in Congress and the Senate. The idea of ​​the Ministry was to approach the project within the Government through a “very specific” reform of the law with the aim of “shielding its permanence” and for it to be constituted “as a timeless exhortation to public administrations” so that continue structuring the response of the “country against sexist violence.” Given that step, now it is the turn of the Cortes Generales.

On this point in particular the PP has preferred not to position itself. To questions from elDiario.es, from the parliamentary group of Pablo Casado they assure that “there has been no talk” of the shielding of the Pact.