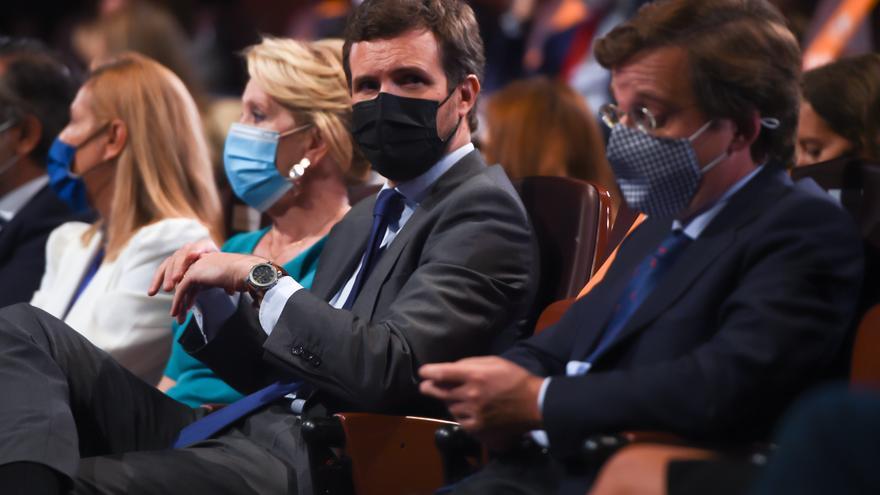 No one was missing. No one, except those who already knew for sure that they would be missing. The entire PP of Madrid crowded together this Wednesday in the Auditorium of the Reina Sofía Museum for the third day of the party’s national convention, which must relaunch Pablo Casado’s project before the electoral cycle looming on the horizon. Esperanza Aguirre was even there, sitting to her right and ready to tell anyone who would listen that her mission was to help her leader reach Moncloa. Aguirre starred just a couple of weeks ago in the loudest part of the row between Casado and the president of Madrid, Isabel Díaz Ayuso, for control of the party in the region, by being on the side of this in his attempt to mark the times to the state address. A first round that Genoa won and, incidentally, the mayor and national spokesman, José Luis Martínez Almeida, who received the great ovation of the morning for a speech worthy of an opponent: from memory, fast and without surprises.

The itinerant convention of the PP thus reaches the middle of its path and Casado has overcome the most complicated port. On Thursday he will play Seville, where he will be accompanied by former president José María Aznar. On Friday, Murcia. And on the weekend, close in style in Valencia, including the bullring. This Wednesday, the star guest was the former president of France Nicolas Sarkozy, whom Casado put as “an example to follow”. A very strange choice by the PP leader since it weighs on him a three-year prison sentence for corruption To which another year can be added this Thursday due to a case of illegal financing. In a previous stop, on Monday in Santiago, it was Mariano Rajoy himself who remembered his successor that populist parties sprout “from corruption and economic crises”.

The Casado convention, although originally devised to “open” the party to the left and right, even as an electoral claim, lost this intention before it began, in the absence of relevant figures of the social democracy or the current European liberal ecosystem. Neither the political and social contents are being especially novel. It does not seem that the PP is going to incorporate hitherto unpublished ideas despite the week of hours and hours of talks, symposia and conferences.

What it is serving for is to make it clear that the party is with its president and that Ayuso’s move of trying to be at the same level, and ideologically listing him to the right, has not had to sit particularly well indoors. . Ayuso, who played the letter of the sit-in to Casado for a tour of the United States that is happening without pain or glory, finally had to shorten the trip, miss the end of the party that he had prepared in Hollywood at the hands of Alejandro Sanz, and resign himself to arrive in Valencia on Saturday for a round table with other regional presidents of the PP. His peers, within the party.

Ayuso was not in Madrid this Wednesday and, as a member of the management pointed out last week, not without a joke, his site was occupied by “someone equivalent.” In fact, no one in particular occupied it. First, it was Almeida who opened the day with a long and flat speech worthy of the best aspiring lawyer in the State. At his side on stage, the former president of Portugal, José Manuel Durao Barroso, who advised Casado that the PP become “strong” in the center to, from there, open up to the right and left and conquer power. An idea as novel as it was Aznar who launched it for the first time from 1989 until its absolute majority in 2000.

Almeida got a perhaps excessive ovation, not so much for him as because no other leader had been given his ears like this in the previous days. The mayor and national spokesman for the party went out to Ayuso when she tried to become independent from the calendar of regional congresses approved by the main body of the PP, the National Board of Directors. Almeida dropped that he could run for the primaries, the number two of Casado, Teodoro García Egea, responded to the former leader that “what destroyed the PP in Madrid was corruption”, everyone in the party remembered the consequences of the row that Aguirre and Alberto Ruiz Gallardón staged more than 15 years ago (who also did not appear at the Reina Sofía Auditorium, faithful to his almost total silence since he left politics) and the war was closed . Apparently this Wednesday Aguirre either did not mind being involved in the internal war or saves his answer for later.

Who did not miss the opportunity was Casado. Not to mention Ayuso (as throughout the convention there is talk of the danger of “dogmatisms” or “sectarianisms” without mentioning Vox), the president of the PP passed the list of attendees during his face to face with Sarkozy. “We are in Madrid, the capital of Spain, the capital of Latin America and one of the great European capitals,” he started. “In Madrid the PP has been governing for a long time,” he pointed out to make it clear that nothing new began in 2019 (or in 2021). “Here is a mayor like José María Álvarez del Manzano [quien se hizo con el bastón de mando en 1991] and a president like Esperanza Aguirre [2003]”said Casado.” Here we have all the advisers [de la Comunidad de Madrid]”He said, to add:” The president has not been able to come because she had a trip to the US already scheduled for a month, but she sends you a very strong greeting. “A tour, that of Ayuso, in which the most newsworthy It has been his criticism of Pope Francis for having apologized to Mexico for the Spanish conquest. Vox has joined the Madrid leader’s criticism of the head of the Catholic Church. Public this Wednesday, to the regional president They did not allow him to participate electronically in the meeting.

The leader of the PP left Almeida for the end: “And here are also all the councilors of the Madrid City Council with their mayor at the helm.” And another ovation for him from the entire audience. Behind the scenes, very smiling and proud, one of his main advisers in the City Council, Ángel Carromero, Aguirre’s former right eye and whom everyone points out as one of the objectives of the harsh statements of the former president in an interview in The world, in which he came to speak of “chiquilicuatres and niñatos” within the headquarters of the PP.

After passing through Madrid, the convention faces its final stretch. Married visits Seville on Thursday, where he will share the stage with José María Aznar, who also came out at first to defend Ayuso’s state temptations, to later return to his role as president of Faes without making a lot of noise on the getaway. And on Friday, to Cartagena.

On the struggle between Ayuso and Casado, not a word at the convention. And that the clash between the national president and the leader in Madrid has ceased to be an open secret. In the bilateral meeting between the regional presidents of Andalusia and Murcia, Juan Manuel Moreno and Fernando López Miras, the Andalusian president already openly acknowledged to the media a “problem” with Ayuso which is in the process of being “solved”. López Miras subscribed to the words of his partner in defense of Casado’s “unquestionable” leadership. None wanted to value the statements of the Madrilenian about the Pope.