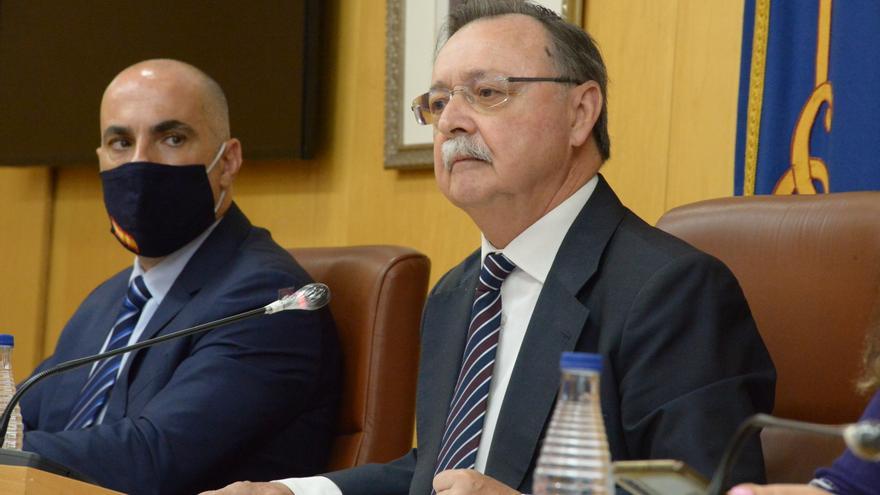 The president of the PP of Ceuta, Juan Vivas, has relocated his party to the antipodes of Vox. During an intervention of similar depth to the one that Pablo Casado had in October last year, when he warned those of Santiago Abascal of the distance between the two - "we don't want to be like you" - and to which he has not given continuity later. Vivas tended the sanitary cordon that had been refusing to draw with the extreme right for two years: "When we had an invasion of 12,000 people and there were another 15,000 willing to enter, I felt supported by the President of the Nation, who stopped it, and by all the members of this Assembly, with one exception, yours, who were on something else: burning Ceuta to the greater glory of its retrograde and outdated populism. "

Isolated, the extreme right has been trying for weeks to convey to Ceuta that "only Vox remains" in the face of a "social-communist and pro-Moroccan" conspiracy with "fifth columnists" from the neighboring country that identifies 50% of its population in the Spanish Muslims of the city . With the Minister of the Environment, Yamal Dris (PP), calling him a "scoundrel" and a "fascist" raised from his seat, the spokesman for Vox, Carlos Verdejo, addressed the camera disconcerted yelling "this is the PP of Ceuta! ".

The Popular Party of Ceuta has, in fact, returned to the position it had in the campaign of the last regional elections, when Vivas accepted the challenge of being its candidate again after nearly twenty years of very comfortable absolute majorities for the first time it threatened the exponential growth of Vox, which had already taken the city seat in Congress and one of the constituencies in the Senate.

On May 5, 2019, Vivas proclaimed: "We do not want to know anything about agreements with formations that use the religious sphere in politics." He pointed to two, the localists of the Caballas Coalition, "whose leaders maintain that in Ceuta there is no coexistence and there is a society split in half in which one part anchored in 1415 is dedicated to subduing the rest," and Vox, " that has burst in with an inflammatory speech loaded with prejudices that confuse and offend in an absolutely negative way for the stability, progress and advance of the city, "he warned," convinced "that Genoa would not order him to make a pact with those of Santiago Abascal.

Vivas won after the two previous hits of his PP in general elections against the PSOE and Vox, but he remained in the minority forced to agree with one of his two great contenders. As expected, Casado did not impose company on him and, faithful to his commitment, he did so first with the Socialists, who agreed to give him their support in exchange for a handful of advisers and public officials and the management of two municipal companies, including Radio Television. Public (RTVCE). Vox did not stop insulting him: "Traitor", "addicted to lies", "unscrupulous", "hypocrite" ...

The North African disagreement was surprising in the capital. On June 7, 2019, the Vox leadership summoned its leader in Ceuta, Juan Sergio Redondo, and other elected deputies in Madrid. In a meeting with Ignacio Ansaldo and Tomás Fernández, the latter recently arrived from an interview with Casado, he asked his territorial leader: "What's wrong with Vivas?" "Nothing to us, what happens to him with us," replied Redondo, who just after the elections tried to attract some PP deputies who he believed were related to dismount the re-elected president. Failure.

His opportunity to condition the PP of Ceuta came six months later, when Vivas, champion of moderation and pragmatism, who had already earned a reprimand from Genoa when he supported the reform of Zapatero's autonomic financing because it favored the city, arrived at the conclusion that the local PSOE was not "to be trusted" (it refused to approve the accounts and was unmarked without agreeing to initiatives such as including Easter at the end of Ramadan in the work calendar) and turned to the right.

Without further explanation, Vivas approved Budgets for 2020 with Vox, which wanted to make its mark by taking over the helm of RTVCE and cutting public subsidies to entities that had even been decorated with the Medal of Autonomy as Sick Without Borders, an NGO dedicated to help Moroccan patients without resources, Progressive Women or Cardijn.

The far right demanded the First Vice Presidency of the Chamber to guarantee a salary to its national police deputy, Francisco José Ruiz, and proclaimed a new era in the regional Chamber: "These accounts are only the beginning of a new stage of elimination of superfluous and unnecessary investments, the end of the chiringuitos and the purge of the Socialists, a criminal party since its founder, "announced its spokesman, Carlos Verdejo, during the debate for the initial approval of the document, which degenerated into the first of many parliamentary brawls of screams , insults and clashes about to come to blows. "These are the junteras, Juan, las junteras!", The Socialist deputy Eloy Verdugo, a reputed union member of the UGT, reproached the president.

At that time the PP and Vox numbered fifteen of the 25 deputies of the Assembly (9 and 6), but the latter lost two after knowing the messages that the far-rightists crossed on WhatsApp repudiating the "shit of Ceuta de las Cuatro Culturas" that in his opinion he had promoted the PP and regretting that there are Spaniards who say that they have "to swallow Moors for balls."

Those conversations, still under judicial investigation for an alleged hate crime and discrimination, gave rise to the largest demonstration in the recent history of Ceuta. On February 28, 2020, more than 6,000 people took to the streets from the Prince to the center demanding that Vivas do without the "racists", whose proximity also opened sores in the PP and in its Parliamentary Group, in which the president has always sought to have at least one member from each of the city's four cultural communities (Christian, Muslim, Hebrew, and Hindu).

The Government folded candles, abjured expressions such as "gender violence" and began to include in official documents increasingly offensive allusions towards migrants and the neighboring country. From the opposition, arguing that any way out would be better than allowing Vox to continue conditioning the local Executive, the PSOE launched a motion of censure for which it only needed to convince one of the PP deputies. According to participants in the operation, the attempt was one step away from succeeding, but at the last moment the current Minister of Social Services, Dunia Mohamed, backed down: "I have not signed nor will I sign a motion of censure against the President and the Government of the PP. I will never betray those who have trusted me, "he promised in a video.

The earthquake passed, but the malaise within the Government and the Board of Directors of the regional PP with Vox did not stop growing. At the end of summer it began to emerge. Those of Vivas censored in social networks (later they deleted the tweet) that Senator Susana Melero, whose disapproval they ended up consenting in a Plenary for attacking Moroccan patients in a vegetative coma admitted to the Hospital, voted "against Ceuta" on the Tobin and Google rates .

Vox attributed it to "the impetuous rejection of the most progressive wing of the PP" of his formation and the general secretary of the popular, Yolanda Bel, gladly picked up the glove: "You do me a favor for making it clear that we are like water and oil". Out of the spotlight, in the PSOE, after a call from Ferraz, according to different sources, the idea was consolidating that "the best thing for Ceuta" was to restore stability to the Government and isolate Vox. During some weeks it was explored which of the two alliances was more viable: "Scare or death", they say that the dilemma was described within the Governing Council when the extreme right claimed to leave all Muslim entities without aid.

"Alive, no matter how much he was warned of the risks of the assimilation of the PP to Vox", explains an old friend of his, "he believed that it was an exalted group capable of channeling institutionally, but he found a quartet convinced that the only The solution for Ceuta is Abascal in Moncloa building a very high wall ".

The Minister of Finance, the Hindu Kissy Chandiramani, and the secretary of Barriadas of the PSOE, Juan Gutiérrez, began to rebuild the bridges that Vox believed had been blown up forever and that, however, at the end of last year, allowed to reestablish the alliance between the two large parties of national implantation, which in 2001 also joined forces to remove the GIL from the City Government as a State operation.

"The homeland does not belong to Vox, the homeland belongs to all Spaniards and they cannot be discriminated against or excluded or denied because they have another religion, another race or another culture," Vivas has set foot on the wall a few months after his party decide, in the congress to be held this year, if it maintains its line now that it has announced that it will not be presented again in 2023, which according to all analysts would force the extreme right to obtain an absolute majority to take over the Government of the City, or it surrenders to the faction most in favor of approaching it.