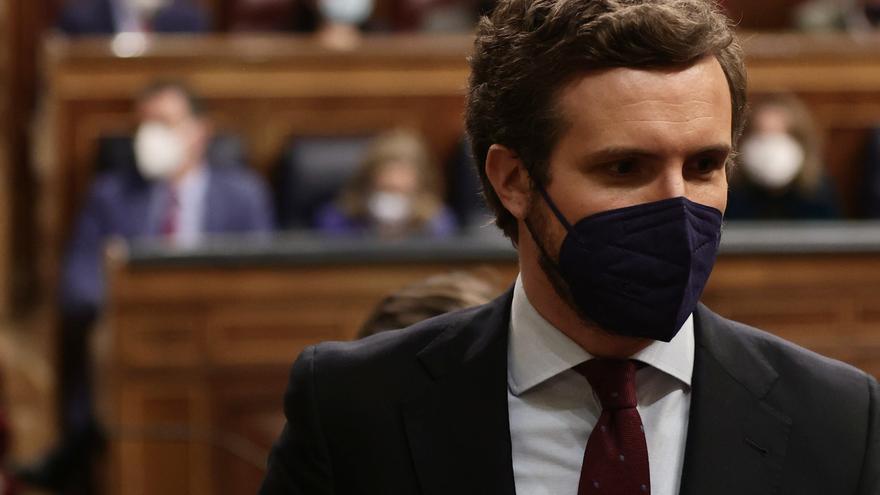 The Popular Party of Pablo Casado has decided to attack the Government because the Regulations of the Congress of Deputies approved in 1982 by the practical unanimity of Parliament, also by the Popular Alliance - predecessor of the PP, then integrated into the Democratic Coalition group - does not include the month of January within the ordinary periods of sessions of the Lower House. As soon as the new year began, the popular have launched a new campaign of discredit against the Executive, ensuring that the Lower House is "closed", a false statement. The PP also maintains that if Parliament does not open it is because the Government does not want it, which, always according to the theory of those of Casado, thus tries to extend a kind of "vacation" until February.

"Spain is not there for the Government to go on vacation. We ask to open Congress in January to take measures against inflation and the price of electricity, control the chaos of the 6th wave of Covid and the distribution by hand of EU funds, that only 5% of 24,000 million have been executed, "the PP leader himself wrote on Twitter, who is confined after testing positive for coronavirus. "With the difficult situation in Spain, Congress cannot stop in January. The sixth wave and the management of European funds demand that the government maintain control in the face of its passivity and its obscurantism. We request that the commissions appear and function," he added For her part, the spokesperson for the popular in Congress, Cuca Gamarra, in the same social network.

The reality is that Parliament will not be standing still in January 2022, as the main leaders of the PP try to defend. The Registry to present initiatives will be open all month. And, as the Secretary of State for Relations with the Courts and Socialist deputy, Rafael Simancas, recalled in another tweet, the president of Congress has already authorized an extraordinary session of the subcommittee for the reform of the electoral law. The day before, on January 12, the presentation will be held on the proposal for the Organic Law to reform Organic Law 4/2015, of March 30, on the protection of citizen security, the so-called 'gag law'. On the 18th, the subcommittee that analyzes how to strengthen regulatory bodies against corruption will foreseeably be held. Throughout the month there will also be meetings of the presentation that must prepare the opinion on the equal treatment law.

All these calls were requested by an absolute majority of Congress on December 23, with the signature of the deputies of the same PP that now says that there will be no parliamentary activity with the sole purpose of wearing down the progressive Executive. In addition, control of the Government cited by Casado will be exercised in the Senate throughout this month, with appearances by different ministers.

As established in Article 61 of the Congress Regulations, the Lower House "will meet annually in two ordinary periods of sessions, from September to December and from February to June", therefore January is excluded from that ordinary period. But that same text establishes that, "outside of said periods, the Chamber may only hold extraordinary sessions at the request of the Government, the Permanent Deputation or the absolute majority of the members of Congress," which is what has happened with the subcommittees. aforementioned and that will take place this January.

If with that appeal to "open Congress in January" launched by Casado, the leader of the PP was referring to holding extraordinary plenary sessions, his group could, according to the regulations, try to obtain the support of an absolute majority of deputies. But sources from the party leadership consulted by elDiario.es have assured that, for the moment, the only thing they are going to limit popular It is to request that the Permanent Delegation meet - which replaces the Plenary Assembly outside the ordinary periods of sessions and which must be convened by Batet on its own initiative or at the request of two Parliamentary Groups or one fifth of its members - to study possible appearances of ministers in their respective committees. The Congress also points out that there is no official request in the registry for an extraordinary plenary session to be held in January.

The affirmations of the beginning of the year of Casado and other leaders popular They therefore have no other objective than to continue attacking the Government, which they consider illegitimate since its creation, in January 2020, by the PSOE and United Podemos coalition, as well as by the support of Basque and Catalan nationalist forces.

From the PP they also seek to continue wearing down the work of the president of Congress, Meritxell Batet, whom they already censured for accepting, as soon as the legislature began, that pro-independence deputies and United We Can use formulas of compliance with the Constitution alternative to the usual ones 'yes, I swear' or 'yes, I promise', as had happened in previous legislatures in which the Lower House was chaired by parliamentarians popular. Despite this, PP and Vox appealed these compliance to the Constitutional Court, which has not yet made public its decision on whether these parliamentarians breached the regulations, although they already endorsed similar formulas in the past.

Other moment of confrontation between the PP –And also Vox, which is fighting with the popular ones for the same electorate– and Batet took place in October after hearing the Supreme Court ruling on the former member of the United We Can Alberto Rodríguez, convicted by the same court for beating a policeman in 2014.

His possible disqualification as a member of parliament - the sentence established the suspension of his right to passive suffrage - which finally took place at the end of that month, generated a legal mess between the High Court and the Lower House, which was aggravated by the pressure of the right on Batet, demanding the suspension of the former parliamentarian despite the fact that a report from the lawyers of Congress initially considered that he could keep the minutes. On that occasion, the PP went so far as to accuse the president of Congress of wanting to "boycott" the ruling of the High Court.