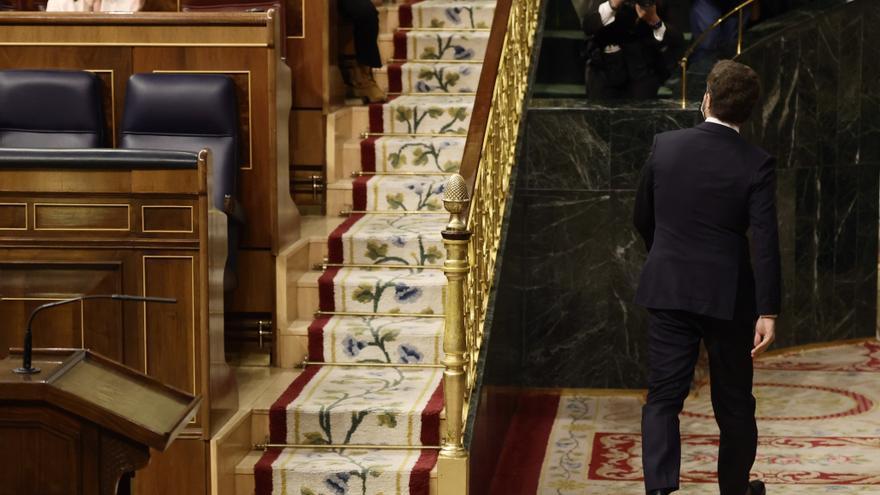 Time had run out for Pablo Casado. In reality, he had 37 seconds left to consume in his turn after Pedro Sánchez's reply in the control session. It was no longer the countdown clock that mattered to him. He had delivered his short speech of just under two minutes, received a standing ovation from those who had betrayed him and there was nothing more to say. Casado got up while Meritxell Batet was looking at him, waiting to see if he was going to use those seconds. Without further gestures, the still leader of the Popular Party got off the bench, turned to the left and left the floor. I went and there was nothing. That is what was left of Casado's presidency. Nothing.

The day before, it became known that he intended to attend the control session on Wednesday in a gesture that politicians and journalists considered irrational. He was already dead and was just trying to get buried with some dignity. Did he mean to drain the chalice of shame to the last? To that extent had he lost touch with reality?

In the end, it turned out that this gesture reinforced him in a story in which most of his fellow party members have adopted the role of the traitor. It was admirable that he decided to see his work through to the end instead of hiding in his office. He was also politically absurd and personally tough. But he forced the PP parliamentary group to listen to him and look him in the face.

"Look: this is where Casio's dagger entered! See what a breach the implacable Casca opened! Because of this other one, his beloved Brutus wounded him!" other deputies who made up Casado's body of Praetorians in Congress, those who broke their hands applauding when they thought Casado had given a great speech and now hid their blood-stained robes.

The only thing that was heard was a farewell phrase from Cuca Gamarra that was so sad that it could have been spared. The PP spokeswoman sent the "great respect and admiration" that the parliamentary group feels for Casado. And that was it.

In the section of unfathomable mysteries, Cayetana Álvarez de Toledo was seen standing applauding a Casado whom she despises. It had been a kind of lapse forced by circumstances. She didn't want to clap her hands, but she saw all her classmates do it and she ended up getting up without much passion. Later, she explained to the journalists that "in front of the feelings, there are the facts". For her, the facts are that Casado accused Isabel Díaz Ayuso of influence peddling and that with that "the way of doing politics has been dirty." Now, Álvarez de Toledo supports Núñez Feijóo, who of course has a more moderate trajectory than Casado.

Three deputies left the chamber to accompany Casado: Pablo Montesinos, Ana Beltrán and Antonio González Terol. Three. A drop of dignity and coherence between so much renunciation or cowardice. The others stayed for an irrelevant and insipid control session.

Casado's speech was not a piece of oratory to remember. The president of the PP had ended up developing a style in which he only stood out when he charged the government with a fixed bayonet. This time, he claimed a "space of centrality" from which he deserted a long time ago, because the brutal attack was what the parliamentary group and the right-wing press cheered on. He went back to Sánchez's investiture session speech: "Our responsibility is to widen the space of centrality so that both the PP and the PSOE could win in it without the need for pacts with those who do not believe in Spain or alliances with those who attacked her".

Casado accused Sánchez on countless occasions during this legislature of associating with "the enemies of Spain", of endangering fundamental rights and of placing the country in financial bankruptcy. His centrality It consisted of firing constant bursts against the Government from the most right-wing positions.

Sánchez did not want to make firewood with all the fallen forest before him. He did not let himself be carried away by a feigned emotion that no one would have believed. The small theater of sorrowful feelings was for the PP bench. He recalled that the opposition "has installed itself in constant disqualification" with the aim of denying the legitimacy of the Government, a strategy with which Casado ended up becoming related to Vox.

What Sánchez did do was give a piece of news: "I am announcing that the government is not going to advance elections." He will not take advantage of the state of prostration in which the main opposition party finds itself. It is one thing for many people to think that the president is a lucky guy, but neither should be abused. Political cemeteries are full of people who went overboard by dissolving Parliament to take advantage of a supposedly favorable situation at the polls. The last one was Mañueco, who is now going to eat a whole coalition government with Vox.

The 23F of 2022 will be remembered for the farewell of Pablo Casado, the man who from day one wanted to take over the world and who in the end was gobbled up by a creature of his creation, Díaz Ayuso. The chronicles say that these last days he does not come out of his perplexity, because he believes that he has not done anything wrong. His problem began to be insoluble when he spoke of a possible crime of influence peddling in Monday's interview with Carlos Herrera at COPE. He made the toughest bet against Ayuso and from there one of the two had to come out feet first. His party, in a panic, decided it had to be him.

The truth is that the one who nailed it was Albert Pla. The musician well known for his wild opinions on a few things offered a very accurate analysis: "Fantastic country. You denounce a person from your party for corruption and they kick you out for sneaking."

They stab you, kick you out and give you a standing ovation. What to do to make it look like an accident.