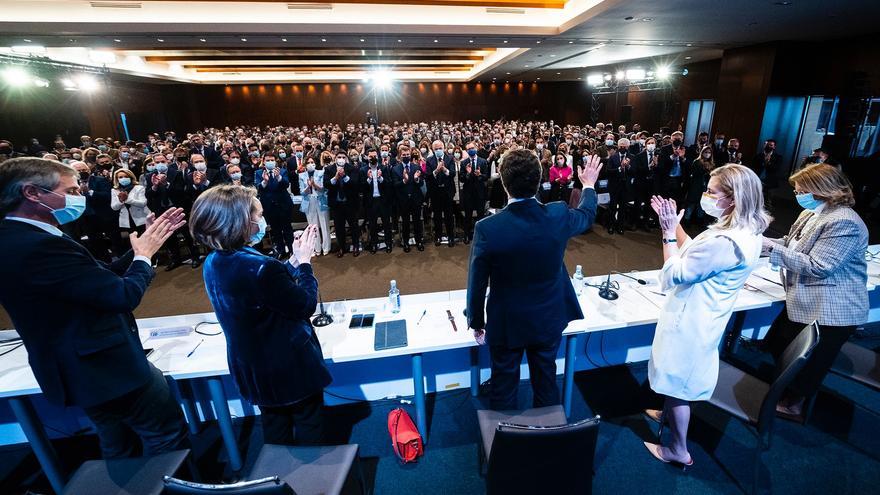 "She looks back when you have to look forward." The phrase of an important leader of the PP from outside Madrid exemplifies well the feeling of a good part of the party, especially from outside the M30, when Isabel Díaz Ayuso's speech before the National Board of Directors ended, marking the beginning of the Countdown to the leadership of Pablo Casado. The intervention of the Madrid president, proclaimed since the previous day, did not cause a cascade of requests to speak. There were hardly any, in fact, and none among the top-level figures who accompanied Ayuso in the front row of the luxury hotel room where the body that officially launched the 20th extraordinary congress of the PP was held.

All together, on their feet although it cost them, they fired a Casado who leaves without bloodshed, although he still doesn't know very well why he has to leave. And that he leads his successor by the hand to the top of the pyramid. Since he was aware that his fratricidal war with Isabel Díaz Ayuso had finished with him and with his options to reach the Palacio de la Moncloa, Casado has been willing to pave the way for Alberto Núñez Feijóo to take control of the PP.

"I proposed most of you who are on this Board of Directors as candidates for different responsibilities," he said in his speech. "I believe that the difficult option must always be put before the comfortable one and our principles are useless if we do not stick to them in the most complex moments," he added. He then apologized to the militants for "everything they have done wrong and the situation they have suffered." And he settled: "And I also feel, I have to say it, the reaction that I have had to suffer, which is unprecedented in our democratic history, and I sincerely believe that I don't deserve nor would I deserve any of you".

But Married signed, as the Galician wanted, a paper where he made it clear that he was not going to appear against him at the congress on April 1 and 2. He also wrote that the president of the Xunta would have his support to succeed him on the 7th floor of the building –for sale– at number 13 on Calle de Génova in Madrid. And this Tuesday, in a brief speech for what is usual for him, Casado has reiterated that he is committed to him. After saying that he felt "proud" of the work of the governments that had been achieved or preserved under his presidency, he pointed out: "Very especially that of Alberto Núñez Feijóo who has always given me his loyalty and friendship, the same that he will receive of me for what I decide to do in the future".

Feijóo has been the one chosen by the regional barons to replace Casado and try to pacify a knocked-out organization, broken where least expected: the heirs of Aznar's PP in Aguirre's Madrid. That the friendship of Casado and Ayuso has ended in a nuclear war in the heart of the party is seen with panic outside the Madrid metaverse. "We have to restart the party," said the new president of the Congress Organizing Committee, Esteban González Pons, at a press conference in the afternoon. It will be the direction that leaves the conclave that will have to decide whether to file and expel someone, or not.

"It is difficult to do worse than we have done so far," he assured at the gates of the Eurostars Madrid Tower, which occupies part of one of the enormous towers that receive visitors entering the country's capital from the north, one of the leaders who have suffered in the first person the attacks of the Casado-Ayuso duel. "We have not been able to fix it inside," lamented a prominent Andalusian leader as he left the meeting.

Because the PP wants to turn the page on a chapter that has caused the biggest crisis in its history. But Ayuso and his men don't seem to be willing. The feeling of the party was represented by Casado's speech. But the president of the Community of Madrid took the floor to say that this is not enough and thus demand the "expulsion" of those who questioned the contract that her Government awarded to a friend of her people and for which her brother has received a commission , which Ayuso herself has recognized from the start.

Ayuso took the floor and broke with the claims of the PP to turn the page as soon as possible with a harsh speech against the outgoing leadership. "I don't believe in falsely closed wounds," he assured, pointing to the until now leadership of the PP formed by Casado and the former general secretary of the party, Teodoro García Egea, absent during the Meeting. "What I ask is that everyone who has been part of this campaign be immediately put on the street," he insisted. And in case there was any doubt, the regional president reiterated these words to the press as she left the hotel where more than 400 PP leaders have gathered: "All those who have dedicated themselves to creating doubts about me have to be away from the party", he defended without wanting to give his own names, but making it clear that he is not going to consider the matter closed, much less. A message that also leaves the new address to be chosen in April.

There were no names but it was Casado who called her up to ask for an explanation for the millionaire contract in which his brother is involved five months ago and the one who spoke of "influence peddling" in an interview on Cadena Cope. "How many Rita Barberá is going to leave this party in the gutter?", Ayuso came to say behind closed doors with the popular leaders, comparing himself with the deceased mayor of Valencia, whose end was blamed on an abandonment of the party due to his numerous cases of corruption , some of which are still in court.

But Ayuso's intervention did not stop there and he also gave Feijóo duties, even before he has decided to announce his step to the front, an announcement that will take place this Wednesday. The Madrid president asked that after the extraordinary National Congress "the cultural battle" take place and she declared herself opposed to reaching agreements with the Government. "Every time we have mimicked ourselves with the left we have lost all credibility. I do not know of a negotiation with it where we have won anything," he sent as a message to the new leadership that is elected at the beginning of April.

Casado responded to Ayuso when she was leaving the lectern from which she dealt the last blow to her former friend. "Isa, I already told you in that meeting in which we were two and a half hours that I have not done what you have said," she snapped, according to El Periódico and confirmed by elDiario.es. And he added: "This has taken me ahead."

However, Pablo Casado did what was expected of him. Support his successor. Close ranks with his party. Defend the management of him. And point out only sideways what he considers an injustice. "I believe that the difficult option must always be put before the comfortable one and our principles are of no use if we do not stick to them in the most difficult moments," he said.

The organic roller of the PP does not rest and in the afternoon the extraordinary congress was already underway. In a month there will be a new president, a new general secretary and a new management. If there is no rival, in mid-March Feijóo can even be considered the winner of the summary process. This Tuesday, one of the leaders closest to García Egea lowered the options of a weighty candidacy that can compete with the Galician, despite the fact that the former secretary general said that there was a probability of "7.5 out of 10" that yes happened.

In the National Board of Directors, in addition to Ayuso, the presidents of the PP of Extremadura and Castilla-La Mancha, José Antonio Monago and Paco Núñez, the former spokesman in the Senate Ignacio Cosidó, Ayuso's adviser Carlos Izquierdo, who made a defense of his leader, and Cayetana Álvarez de Toledo, who demanded that the extraordinary congress address an ideological paper.

But González Pons discarded this option before the journalists. "The deadlines do not allow writing a paper, discussing it, amending it and approving it with all the guarantees. It will have to be in another subsequent congress where a political paper and perhaps a statute paper will be addressed," said the president of the organization of the congress.

It does not seem likely that Feijóo will convene an ordinary congress as soon as this April is celebrated, but it is plausible that a national convention will be launched that will allow the ideological course of the post-Married PP to be drawn. What is not so clear is that Feijóo and other barons, such as Juan Manuel Moreno or Alfonso Fernández Mañueco, have the same vision as Ayuso or Álvarez de Toledo.