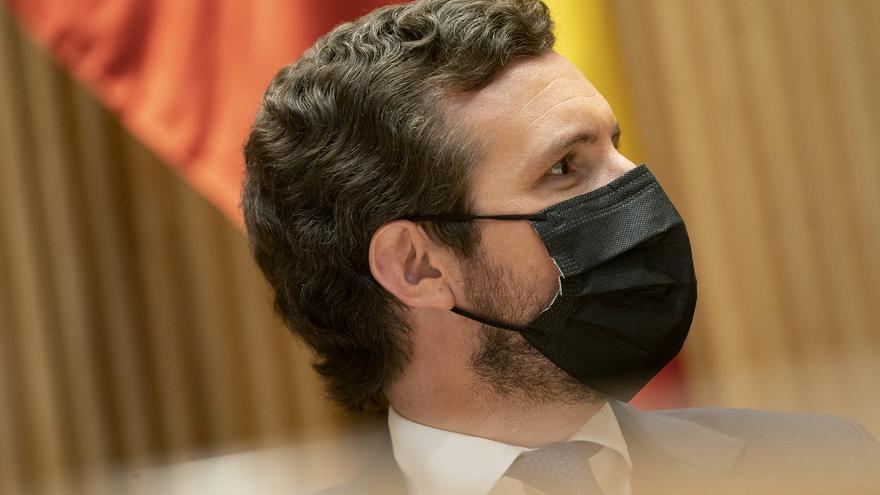 The influence exercised by the extreme right of Vox for three years In all the actions of the Popular Party –in the framework of the battle between both formations for the same electorate– the same historical revisionism on the Franco dictatorship and the Civil War has ended up consolidating in the leadership of the main opposition force. vindicates the party of Santiago Abascal.

The leader of the PP, Pablo Casado, already publicly equates Francoism with the democracy of the Second Republic, avoids questioning those who deny that in 1936 the rebel soldiers carried out a coup d’état and have promised that, if they ever arrive in Moncloa, will repeal all the laws of Historical Memory -The last one, approved this Tuesday by the Council of Ministers-, a decision not even raised by his own party in the recent past, when Mariano Rajoy ruled the country with an absolute majority.

The most recent evidence of this drift from the current leadership of the PP occurred on Monday, just 24 hours before the progressive government gave the green light to the law that seeks to promote the exhumations of the graves in which the victims of the Civil War or that punishes the apology of Francoism. Married He starred in Ávila in a round table on Concord, Constitution and Patriotism, framed in the days of preparation of the National Convention of the popular –In which Genoa 13 intends to relaunch its political project–, which became a conference in favor of revisionism of what happened 85 years ago and of direct opposition to the recognition and reparation of the atrocities of the dictatorship.

The PP leader invited two former ministers, Rafael Arias Salgado, who was head of Development during the first government of José María Aznar, and Ignacio Camuñas, minister during the first democratic Executive of Adolfo Suárez, who was precisely one of the founders of Vox, although shortly after he left the extremist party. During the discussion, the former called the Dutch prime minister a “son of a bitch”, Mark Rutte, while the second offered his particular theory on the Civil War: “The main person in charge of the Civil War was the Government of the Republic”, he said, after assuring that “what happened in 1936 was not a coup d’état”.

Casado, by his side, not only did not make any gesture to correct the former minister but, once Camuñas and Arias Salgado finished their interventions, the leader of the popular he snapped: “What a luxury of speeches!”. The leader of the PP was comfortable throughout the discussion in which he also wanted to emphasize that he does not share the opening of graves, nor the recovery of the remains of the victims of the Franco regime, nor the resignification of the Valley of the Fallen, as well as Neither does the censorship of the apology of the dictatorship, all of them measures included in the Memory Law approved this Tuesday by the Government.

If he ever arrives at Moncloa, Casado made it clear on Monday that his Government will promote the repeal of that regulation and will replace it with a Law of Concord, announced three years ago by the leader of the PP himself, but that the party remains unspecified. .

The only thing that is known about that text, according to Casado’s own words, is that it will seek to create a “compendium that touches on education, public space and this type of issue”, alluding to the regulation of symbols such as flags. The last November 3, the president of the popular announced before its National Executive Committee – which brings together fifty members of the leadership of the conservative formation – that, before the end of 2020, the PP would register in the Congress of Deputies that bill that to this day, eight months after the announcement, is still not presented.

Monday’s act in Ávila caused a huge political uproar due to its denial component of the Civil War and the dictatorship that the PP refused to rectify this Tuesday despite criticism from all left and nationalist parties. Asked specifically if Casado should have corrected Camuñas for his words about the coup d’état of 1936 – in which The former minister reaffirmed himself this Tuesday, in an interview in Cuatro-, the spokesperson for the popular in the Congress of Deputies, Cuca Gamarra, he was limited to giving the following answer: “The president of the PP has always been very clear and resounding about the Civil War. This party, in 2002, with an absolute majority, promoted and supported a resolution that condemns the Civil War and that establishes very clearly the framework of what happened at that time in Spain. The PP has not moved an iota since then. “

Gamarra avoided contradicting the former minister of the UCD who maintained that the Civil War was caused by the Government of the Republic and that he denied the coup, and referred to a resolution, approved 19 years ago unanimously in a congressional commission, in which the PP for the first time condemned the military uprising of the later dictator Francisco Franco and the rest of the military rebels, against the democracy of the Second Republic.

But Casado himself, in recent weeks, has detached himself from that framework agreed in the resolution of almost two decades ago cited this Tuesday by his parliamentary spokesman. At the beginning of the month, the PP leader winked at Vox speaking of the Civil War with an unprecedented reflection in which he equated the democratic regime of the Second Republic with the 1936 coup and the Franco dictatorship. The conflict was, in his opinion, “a confrontation between those who wanted democracy without law and those who wanted law without democracy”, an affirmation completely refuted by different historians They then reproached Casado for his lack of rigor, in addition to accusing him of justifying the coup d’état with which the fight began.

It is not the first time that Casado has tried to delegitimize the democracy of the Second Republic. In 2009, the now leader of the PP used the Law of Historical Memory to, among other things, laugh at the left and call him “carca” because “he is all day with grandfather’s war, with the graves of I don’t know who “.

Genoa 13 has decided to radicalize to try to look more like Vox, thus following the line of the Madrid president, Isabel Díaz Ayuso, who with a speech similar to that of the extreme right swept the regional elections on May 4. Casado and his team now believe it is possible to beat the left at the polls when there are elections, as some polls have begun to show. For this they have adopted this new strategy that has led them to join the historical revisionism of the extreme right on the Civil War, to break for the first time the institutional consensus on the victims of terrorism or to request the resignation of Sánchez due to the recent pardons to the pro-independence leaders under pressure from Abascal, who demands a vote of no confidence from them.

That more right-wing line is the one that Casado’s team will defend this Wednesday at the Parador de Gredos (Ávila), where it will transfer the meeting of the highest body between PP congresses, the National Board of Directors, to celebrate that “three years of Casado’s presidency “after his triumph in the XIX Congress on July 21, 2018. Génova 13 believes that its” alternative to sanchismo is consolidated “because,” if general elections are held, all the polls say that Casado would be president of the Government , being the union of the vote of center right a reality “.