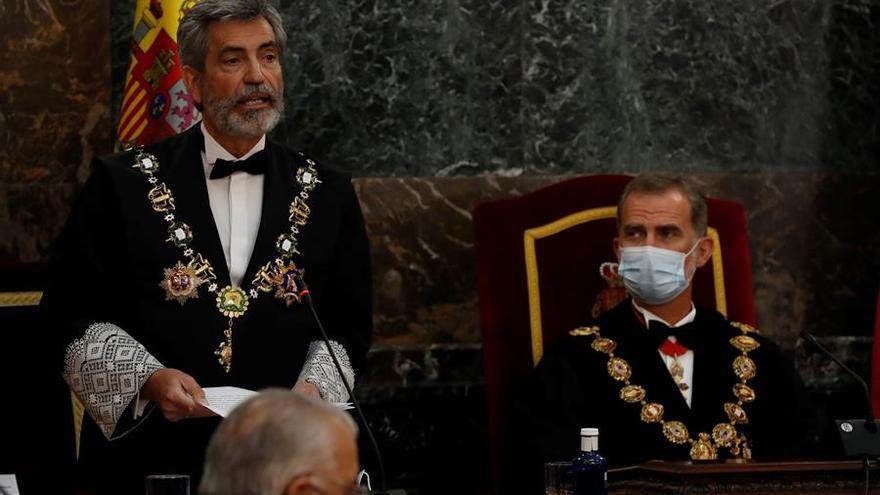 The Popular Party, which until just two weeks ago he negotiated with the PSOE An imminent renewal of the composition of the General Council of the Judiciary (CGPJ), whose mandate expired two years ago, has decided this Tuesday to modify its position in the Congress of Deputies by voting in favor of taking into consideration a bill of Citizens to change the system of election of the highest governing body of judges. The proposal, which has also been endorsed by Vox, will however be rejected by the ‘no’ of the PSOE, United We Can and the rest of the left and nationalist forces that guaranteed the investiture of Pedro Sánchez.

“The change in the election system of the CGPJ fully coincides with the one that we propose”, assured during the debate the popular deputy Edurne Uriarte, who has considered that the Citizens’ proposal “will contribute to the independence of the Judicial Power” and that has charged against the Government of the PSOE and United We can consider their activity “unconstitutional” for reaching agreements with independence forces and, especially, with EH Bildu. “When you mention the Constitution, you remind me of Iglesias, a confessed communist, invoking Article 128, and I remembering Hugo Chávez saying ‘expropriate'”, he has come to assure, addressing the Government, mentioning Venezuela.

The PP has been blocking the renewal of the Judiciary for two years, so this body maintains the conservative majority that corresponded to the stage of absolute majority of the popular. That is why Isaura Leal, the socialist representative who has intervened during the debate on Tuesday to defend the rejection of the initiative has blurted out the following to the PP spokesperson: “Mrs. Uriarte, stop invoking the Constitution and limit yourself to comply with it.”

The Citizens’ text intended that the members of the CGPJ be elected exclusively by the judiciary itself, excluding the legislative branch from the election. It also sought to impose on judges and magistrates a limitation to re-entry into the judicial career, “for a minimum period of two years, as well as the prohibition of incorporation into Courts and Tribunals where judicial cases are instructed or heard in which parties are investigated or prosecuted members of political parties with whom one was or had been associated “.

“It is one of the great pending reforms in our country, it would make all of us in the hemicycle feel proud and it would be a qualitative leap in the country, as well as an effective tool to fight corruption,” he assured during the defense of the initiative the leader of Citizens, Inés Arrimadas. In her opinion, its reform “is profound and ambitious, it is simple to undertake and it does not cost the Spanish anything.”

Its objective, Arrimadas has said, is “to eliminate the control of the political claws of the Spanish justice.” That is why she has appealed to “recover the spirit of the Transition” in which, according to her, the claim was that “the majority of the members” of the CGPJ “be chosen by the judges themselves.” Thus it was, it has continued, “until a socialist government decided that the 20 were chosen by the politicians”. Since then, he concluded, “we have witnessed a shameful cast of judges.”

Santiago (United We Can), to the PP: “His attitude is seditious”

This vision of the leader of Ciudadanos has been refuted by representatives of the left and nationalist parties. Especially tough against the PP has been the representative of United We Can, Enrique Santiago. “By not allowing the renewal of the CGPJ they are attacking the independence of the Judiciary and they despise the political rights of United We Can and the PSOE just as they segregate the neighborhoods of the working class,” he said.

In his opinion, “denying the right to elect those who vote for other parties is a seditious attitude”, which is why the reform is “incompatible with democratic values, eliminating any participation of popular power.” “The judiciary has legitimacy if it is democratically elected. How do you think the judiciary chooses the judiciary? Are they going to ask the executive power to elect the executive power?” “The institutions are not apolitical, the apolitical ones are dictatorships,” insisted Santiago, who has proposed the modification of the Law of the Judicial Power in strict application that only requires three-fifths of the votes of Congress and Senate for the election of jurists of the CGPJ.

In the same vein, representatives of pro-independence formations such as ERC, EH Bildu or the BNG have expressed themselves. The spokesman for the Basque independence formation, Jon Iñarritu, recalled that “the blockade of the PP for the renewal of the CGPJ is on the table” as well as “the appointments of Mr. Lesmes” – in reference to the appointments of judges -, ” with repercussions of 10 to 15 years “. He has also pointed to “the pressure from Mrs. Madrigal” to the Prosecutor’s Office and to the eldiario.es article that includes the monopoly of the PP in the Supreme Court with 25 years of blockades to control the Judicial Power.

ERC spokeswoman Carolina Telechea, for her part, assured that the Judiciary “needs more than reform.” “The problems it has are too many for a debate to take into consideration. How will the Judiciary be independent if it is the heir to the Franco regime? It never made the transition to adapt to the demands of a democratic state,” he remarked.