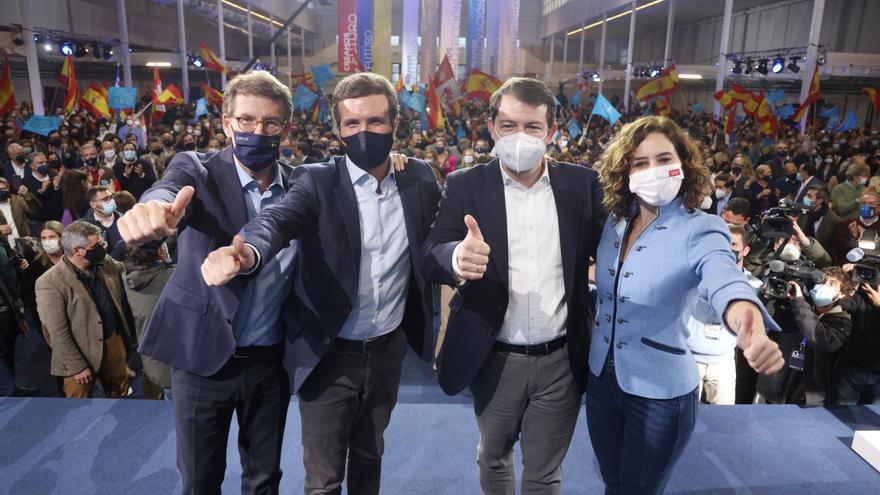 The electoral advances know how they start, but not always what will be the outcome. In December, Alfonso Fernández Mañueco broke with Ciudadanos and summoned the Castilian-Leonese to the polls to govern alone. This Sunday, the polls have certified the collapse of the party led by Inés Arrimadas and his relief by Vox as an essential partner for the PP to maintain the Executive. The result has been far from what was initially planned, with three prosecutors and just two points above the PSOE. Despite the fact that the national leadership of the PP has celebrated the victory, this is somewhat bitter because the result of Isabel Díaz Ayuso in Madrid has not been reissued, the great objective of Pablo Casado to launch his third attempt to reach Moncloa .

The Madrid president comes out, in fact, reinforced in her pulse with the national president of the party, after the candidate has resorted to her in the final stretch of the campaign. Ayuso's planned presence was limited to one act in the first week and the closing of last Friday. But his success among the PP bases and Mañueco's downward trend in the polls set off alarm bells. On the march, another day was improvised with several acts by the Madrid leader.

The strategy outlined at the national headquarters on Génova Street, in Madrid, was to sweep Castilla y León, immediately convene in Andalusia and, already in 2023, link the triumph in municipal and regional elections with the general ones, scheduled for the end of this year. But Pablo Casado has stumbled on the first step. Mañueco's triumph has been by the minimum and his government depends on Vox. The president of the extreme right, Santiago Abascal, said this very Sunday that they have "The right and duty to form a government in Castilla y León".

The president of Andalusia, Juan Manuel Moreno, even threatened to call elections on the same electoral night in Castilla y León, given the blockade that exists in the regional Parliament after the rupture between Vox and his Government, in coalition with Ciudadanos. The Andalusian elections have to be held in 2022, but now it is not so clear that the PP is in a hurry to do so.

If Married wanted to change the Ayuso effect for PP effect to identify the triumphs with him, the plan has not gone well. In fact, Ayuso's speech at the final meeting in Valladolid was interrupted on multiple occasions by the applause of those present. And that the Madrid president spent very tiptoe for the reason for the act, the elections in Castilla y León.

Ayuso proposed a speech with more internal than external keys and in which he exposed what ideas should the PP defend and how he would have to, in his opinion. A decalogue that sounded like a challenge to both Mañueco's campaign approach and Pablo Casado himself, with whom he has had a very tough confrontation for control of the party in Madrid since last summer and whose resolution deadline is getting closer. In principle, the regional congress should be next June at the latest.

At the national headquarters in Genoa, which has been for sale for a year, they did not wait a minute after the polling stations closed to launch the slogan: "The PP wins the elections, the PSOE loses." The recount was bringing Mañueco closer to the socialist candidate, Luis Tudanca, until leaving the difference in just three prosecutors and 1.3 percentage points of vote. "Objective achieved," management sources assured journalists throughout the recount.

The thesis in Genoa is that the PP won where it lost in 2019, which exceeds the sum of PSOE and United We Can and triples Vox. But the arithmetic also indicates that Mañueco will have to add 10 seats that only Vox can provide, unless there is a socialist abstention or even a negotiation between the two big parties.

At eleven o'clock at night, the general secretary, Teodoro García Egea, appeared at a press conference, defending that his party "Government without ties", alone, in Castilla y León. "Pedro Sánchez is interested in talking about a coalition with Vox," he assured, not to respond if they consider governing with the extreme right. "No issue is going to cover up that the PSOE won in Madrid and Castilla y León in 2019 and now has lost." "It is the worst night to sleep" the President of the Government, he has said. "The PP is stronger than ever. It is not a good night for Moncloa or Ferraz, we went out to win," he settled.

Pablo Casado's reaction has been limited to a tweet in which he assured that "the change of cycle in Spain is unstoppable". The president of the PP, unlike Ayuso, began the pre-campaign and the campaign with a great presence, which gradually softened while his speech hardened, precisely because of Vox's push. His "the PP or the chaos" of the closing of the campaign has not seemed to convince the Castilian-Leonese, who have left a panorama so open that in the leadership of the PP they respond with a shrug to the question of whether they rule out the electoral repetition .