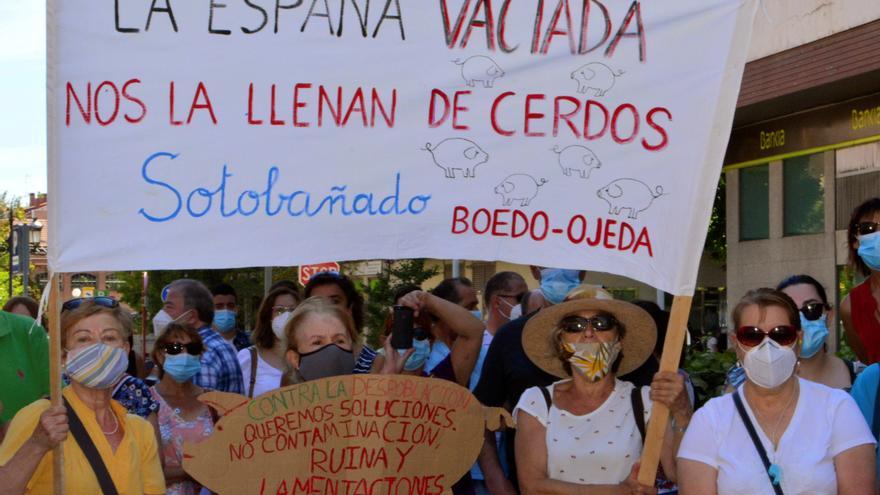 “The macrofarm concept does not exist, it is a smokescreen.” The phrase of the PP candidate for the elections in Castilla y León on February 13, Alfonso Fernández Mañueco, sums up quite well the transition that the party has made since the controversy over some manipulated statements by the Minister of Consumption, Alberto Garzón, on large intensive livestock farms and the consequences they have for the environment, life in the towns where they are established and the quality of their production. The PP has used the hoax, promoted by the lobby meat, for the Mañueco campaign, but he has positioned himself at the same time as a defender of a part of the industry that receives strong criticism in rural Spain, also by mayors or leaders of the PP, who have had to amend themselves or, directly , erase your past.

Garzón defended in an interview in The Guardian the extensive cattle ranch, in front of the calls “macrogranjas”. But from the PP they raised the accusation against the minister, whom they accused of criticizing all livestock and putting Spanish exports at risk. On January 4, Pablo Casado said on Twitter: “Another attack on ranchers and farmers and on the image of our country. We demand responsibility and immediate rectification.”

Mañueco went one step further and, a day later, became a victim: “The criticism of Minister Garzón for my defense of women and men in the countryside will not stop me.” The leader of the PP of Castilla y León advanced the elections behind the backs of his members of the Government of Citizens and after expelling them from the Executive. Today’s internal ally of Casado, despite the fact that in 2018 he supported Soraya Sáenz de Santamaría as they maintain the pulse for control of the Salamanca PP, indirectly faces this month of January a trial for the illegal financing of his party in that same province, political cradle of Mañueco.

The controversy over Garzón’s manipulated words allows the PP to remove both alleged corruption from public debate, which would also directly affect his election as party president in Castilla y León, such as the management of the pandemic or the betrayal of Citizens before they managed to build a sufficient majority to carry out the Autonomous Budgets of 2022. Mañueco convened before the Cortes could even vote once on the economic project of his Government.

In addition, the reaction of the PSOE has opened a new internal war in the coalition government, which may penalize the options at the polls of the Socialists and United We Can on February 13.

Despite achieving these two objectives, the offensive of the PP throughout Spain has also led to its contradictions being exposed and it now appears as a defender of macro-farms, huge agro-industrial complexes that place Spain out of environmental legality. So much so that the country you violate your own ammonia emission limits for 10 years by the boom of this type of farm. The case of the pig production is especially striking.

The rejection of this type of farm is not something of Garzón. Not from a part of the coalition government. The European Union itself has positioned them for years as one of the main polluting and impoverishing factors in food. This same Wednesday, the Polish Commissioner for Agriculture, Janusz Wojciechowski, assured that “one of the most important objectives of the Common Agricultural Policy is to support small and medium-sized farms.” Exactly the one that Garzón expressly defended in The Guardian.

Wojciechowski’s words come just 48 hours after the PP MEP Juan Ignacio Zoido claimed him during a meeting of the Agriculture Commission of the European Parliament that he disavowed Garzón. Despite acknowledging that Spanish meat complies with the legislation, how could it be otherwise, the commissioner added that there is a “problem with large-scale agriculture, especially in animal production sectors “.

The PP itself has warned about these “problems” for months, and years, on its social networks. One of the examples is in Castilla-La Mancha, where the organization that Paco Núñez heads today promoted on Twitter the creation of platforms against macro-farms, recommended reading reports that warn about the health consequences they have or pointed out to the Government of the Socialist Emiliano García Page as the only person responsible for the construction of these farms.

Today there is no trace of those tweets because this very Tuesday the PP of Núñez deleted them, after they returned to the public light. Although there was someone saved captures before his disappearance. The fear of macro-farms and their consequences even led the City Council of Daimiel to approve a regulation last December to veto their implementation in the municipality. The PP has governed the town since 2011 without interruption, and this same January 11, they boasted of banning macro-farms.

But the City of Daimiel has prohibited something that, according to the PP, does not exist. Or it is not legal. This was stated by the party’s parliamentary spokesperson, Cuca Gamarra, on Tuesday, asked about the contradiction. “The macro-farms are not allowed,” he said first, to justify later that these facilities are vetoed where his party governs.

Gamarra pointed out in his appearance that Garzón’s words “attack” the Spanish economy. But he did not think the same before the evidence that the PP of Albacete was demonstrating against the macro-farms. In fact, Paco Núñez himself did it when he was mayor of Almansa, a municipality in that province. Núñez starred in a collective video where he says: “We want to support the neighboring towns that are fighting against these facilities, we do not believe in that model of exploitation“.

A model in which the PP says it does not believe; that is not allowed, he assures; which does not even exist, despite the fact that there are several thousand macro-farms installed in Spain. 7,000, according to the EFE agency. But it has served to distract, even temporarily, the focus of other issues that may bother you more. The problem on February 13 may arise in some provinces of Castilla y León where the rejection of this agribusiness is hegemonic. This is the case of Soria, for example. It is in the depopulated provinces where the candidacies of Emptied Spain have been launched that aspire to change the development model of their regions.

There are six lists of this platform that are going to be presented to the elections, which may modify the distribution of deputies. The PP hopes to win by a large majority, as the polls indicate. But without an absolute majority, it must agree. Mañueco does not disgust Vox, and perhaps he will have no choice in the face of the Ciudadanos debacle and the emergence of new options. Perhaps that is why this Wednesday the general secretary of the PP, Teodoro García Egea, stressed the differences between the PSOE and United We Can and tiptoed through the real criticism made by the Minister of Consumption: that of the macro-farms.