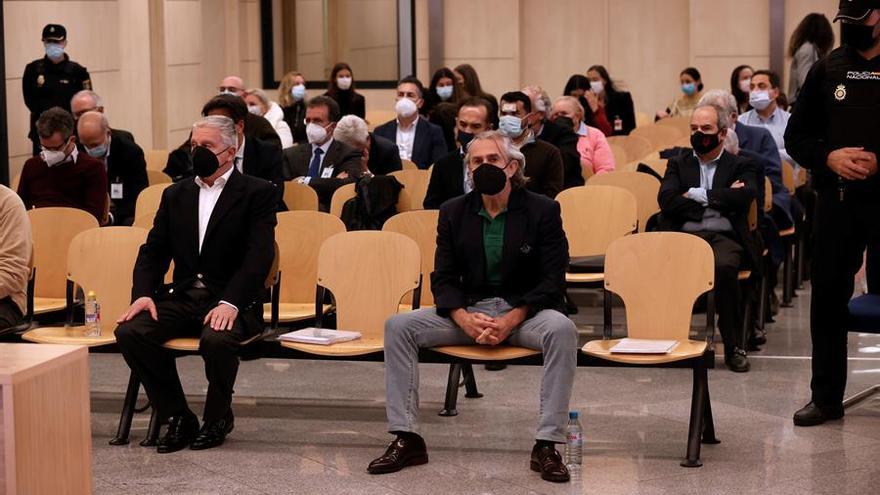 The third great trial of the Popular Party for the corruption of the Gürtel plot was seen for sentencing on Tuesday. For more than two months, the National Court has prosecuted the activity of the network in Boadilla del Monte, the fifth Spanish city with the highest income and historical fiefdom of the formation. A procedure with almost 40 defendants and in which the party that Pablo Casado now leads is exposed to his third conviction for benefiting from the corrupt plot of Francisco Correa. In this case, as responsible for profit for the illegalities committed in the Madrid municipality.

The thesis of the Prosecutor's Office, which asks that the PP be sentenced to pay €204,198.64, is that the party benefited from the bribes that businessmen would have paid in exchange for adjudications of works, plots and services from the City Council, since part of that money would have been used to pay campaign expenses related to the municipality. The investigations revealed that Correa's network carried out its activity in the Madrid town at least between 2001 and 2009, causing damage to the municipal coffers of four million euros.

The conservative formation, whose defense He asked this Tuesday for his acquittal and discharged all responsibility on certain "public servants" of "execrable" behavior, now has against him the cataract of confessions of former party officials and businessmen who have acknowledged the facts in writing and in court seeking a reduction in their sentence requests . They are the 16 'repentant' —all except former mayor Arturo González Panero— to whose story the Prosecutor's Office does give credibility.

Among them, the leader of the plot, Francisco Correa, and his former number two, Pablo Crespo, who recognized the rigging of awards in Boadilla with the approval of the municipal positions of the PP. Both are serving long sentences for other branches of the case and were part of what the investigating judge defined as the "criminal group” of Boadilla del Monte, made up of businessmen and politicians from the local PP who would have received money and gifts in exchange for these awards.

Prosecutor Concepción Nicolás gave special relevance to the testimony of Crespo, also former Secretary of Organization of the Galician PP, who recognized that the payments to the PP were sometimes even written in his personal agenda and that he admitted that acts were paid "in black" of the party, according to what the representative of Anticorruption was in charge of remembering. And that of César Tomás Martín Morales, former manager of the Boadilla Municipal Land and Housing Company (EMSV) and former head of the PP campaign in the town, who explained the "economic needs" of the PP in the municipality and how the Gürtel paid for his "internal activity".

In fact, Martín Morales included an annex in his confession in which he detailed the amounts received from the network both in the pre-campaign and electoral campaign, as well as to pay for "meals, parties or trips." The prosecutor questioned him during his statement about his confession letter, in which he made reference to Correa explaining that he received instructions from the leadership of the PP through Pío García-Escudero, then regional president of the PP. "I was told that the regional president of the party was aware of it and that it had to be that way. I complied with instructions," he stated in court.

The Prosecutor's Office also valued the statement of businessmen such as Alfonso García Pozuelo, owner of Constructora Hispánica, who already agreed in Gürtel's first trial to reduce the penalty request in exchange for confessing his involvement in bribery. In this hearing, he acknowledged that he agreed with Correa a 3% bribe, the same percentage that the leader of the Gürtel spoke of in that first trial. “He has come to recognize what he paid, which coincides with the blue folder, and how he had sent each of the amounts,” said the prosecutor about the builder.

This Tuesday, in its conclusion report, the defense of the PP, which is exercised by the lawyer Jesús Santos, insisted that the party could not be condemned because "it was completely unaware" of those alleged "acts" that, if they had taken place, would have been carried out “without their knowledge or consent”. In this regard, the lawyer insisted that these expenses had been made "in secret or outside the party" and by "people who lacked the power to compromise the party", whose intention was "to benefit themselves".

In this context, the PP representative recalled that the party "had a wide budget margin" for the 2003 and 2007 electoral campaigns and that it had "an expenditure ceiling that was not reached." Thus, if they had wanted to add new expenses there would be "a wide mattress" to do so, he insisted.

The Prosecutor's Office considers, however, that the testimonies of other defendants, witnesses, experts and the documentation obtained during the long investigation of this case show that there was a "profit" for the training and, consequently, the The party's "obligation" is to compensate that money even if it had no knowledge of the criminal acts that were taking place. "Each and every one of the payments is perfectly accredited," said the prosecutor, who insisted that whoever "takes advantage" or "enriches" as a result of a crime has the obligation to return those funds "even when they are not aware of a prior unlawful conduct.

In her statement, the prosecutor made it clear that she gave full credibility to the story of the internal auditor of the formation during the stage under trial, Carlo Lucca Bugniani, who testified as a witness at the proposal of the PP. According to the prosecutor Concepción Nicolás, in her interrogation she stated that "the PP is a single economic person, a single principal with a single number in the party registry and clarified that the expenses of the municipal campaigns have to go through the common services and that everything is contracted from Genoa”. In the opinion of the Anticorruption representative, all the questions regarding whether the financing of the Boadilla PP was known in Genoa were resolved "easily" by this witness. “We are talking about a single legal person and a single economic person. It's that easy," insisted the prosecutor.

This was the thesis that the defense of the PP tried to refute on Tuesday. Santos - who also referred to this witness's statement on several occasions - insisted that candidates for elections cannot commit or make expenses on behalf of the party and that this is a power reserved to the representatives. "It is not that there is no proof of charge to prove that use or that enjoyment [de los supuestos gastos desviados a campañas], is that there is evidence that shows the opposite," he asserted.

The last word, in any case, will have the three members of the court of the National High Court, a judicial body that has not given too much joy to the conservatives. The party was condemned in the first instance by the National High Court in May 2018, in the first sentence that confirmed the existence of irregular financing in the PP. Then, the special court admitted that "parallel accounting" was not the object of its ruling, but the magistrates considered that it was a necessary "context" to explain Correa's network. That resolution triggered the motion of censure by Pedro Sánchez and ended up putting an end to the political career of Mariano Rajoy.

Two years later, in October 2020, the Supreme Court confirmed that ruling, although it eliminated the allusions to the existence of a B box. The judges justified that decision —"insignificant in the ruling", they warned— in the fact that there could be no criminal responsibility without the existence of an accusation or defense. The PP took advantage these passages for affirm that that motion of censure was based "on lies". But the judicial truth was imposed again just twelve months later. On October 28, a third resolution, that of box B of the PP, ratified that there was a "parallel accounting" in the party "whose income and expenditure was not recorded in the official accounting nor was it audited by the Court of Accounts ”.