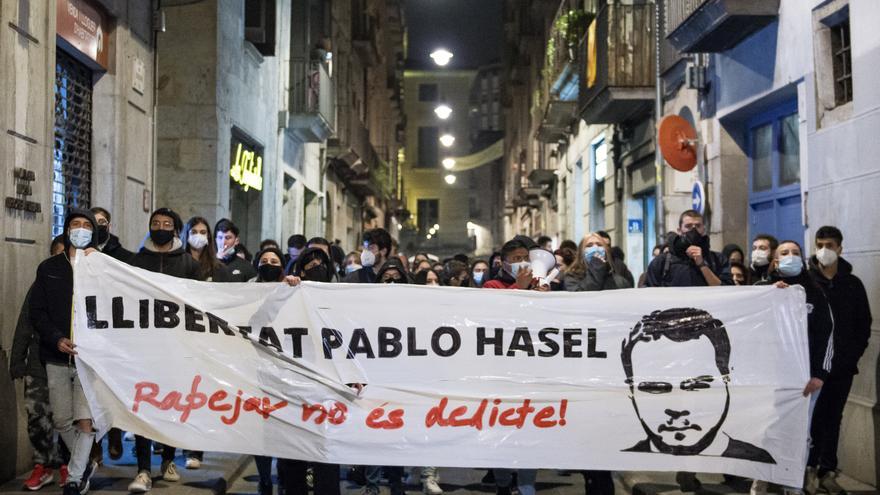 Leaders of the Popular Party have applauded the arrest and subsequent imprisonment of rapper Pablo Hasel and have charged United We Can for, they say, encouraging disturbances in the streets of Madrid and Catalonia. This Wednesday altercations took place in several Catalan cities such as Barcelona, ​​Lleida and Girona for the second consecutive day, as well as in the center of Madrid, during the protests over Hasel’s imprisonment.

The mayor of Madrid, José Luis Martínez-Almeida, thanked this Thursday for the work of the police during yesterday’s incidents and charged the spokesperson for United We Can in Congress, Pablo Echenique, for a tweet he shared last night in which the he supported “the young anti-fascists who are demanding justice and freedom of expression in the streets.” “It is an unacceptable tweet because it legitimizes the episodes of violence with messages of support and understanding, rudely twisting reality,” said the Madrid councilor in an interview on Onda Cero collected by Europa Press. In addition, the national PP spokesman also recalled that Hasel had “three previous convictions, which is said soon.” “It is legitimate to demonstrate, to express the protest, but it can be done peacefully,” he concluded.

The Vice Secretary of Communication of the Popular Party, Pablo Montesinos, has accused “a part of the Government”, alluding to United We Can, to encourage riots in the streets and has therefore called for the resignation of Vice President Pablo Iglesias. “Yesterday, a part of the Government, with Sánchez’s silence, attacked our democracy and posed a gag to the media. To top it off, at night, they defended violence. We demand the immediate dismissal of Vice President Iglesias,” Montesinos assured in an interview on Canal Sur.

For her part, the Vice President of the Government, Carmen Calvo, corrected Echenique on Thursday for “encouraging” the protesters in full altercations and has condemned the “violence” in which some of the demonstrations last night ended. “No right can be defended or expressed with violence, that is an absolute red line,” Calvo said during an interview on SER in which he distanced himself from the UP spokesperson and accused him of “encouraging a situation” in the that there were “wounded, detained and numerous material goods.

“I think that those of us who hold public office have to live our life with a certain complexity. It is not exactly what we think and another is the responsibility of your position. In the positions you are for everyone, not just for those who vote for you. One thing is to defend that a democracy is demanding in the freedom of expression and another thing is to encourage a situation in which we saw wounded, detained and even a girl [que ha perdido un ojo en las cargas policiales]”Calvo added.

The government delegate in Madrid, José Manuel Franco, has defended the “proportionality” of the police intervention in the demonstration for the freedom of rapper Pablo Hasel, which ended with 55 injured (32 police officers) and 19 arrested. Regarding the statements of the United We Can parliamentary spokesman, Pablo Echenique, Franco has assured that it is not “pleasant to hear that opinion from partners” and that he bites “his tongue” because “as a delegate” he has to “apply the utmost caution in his statements “.