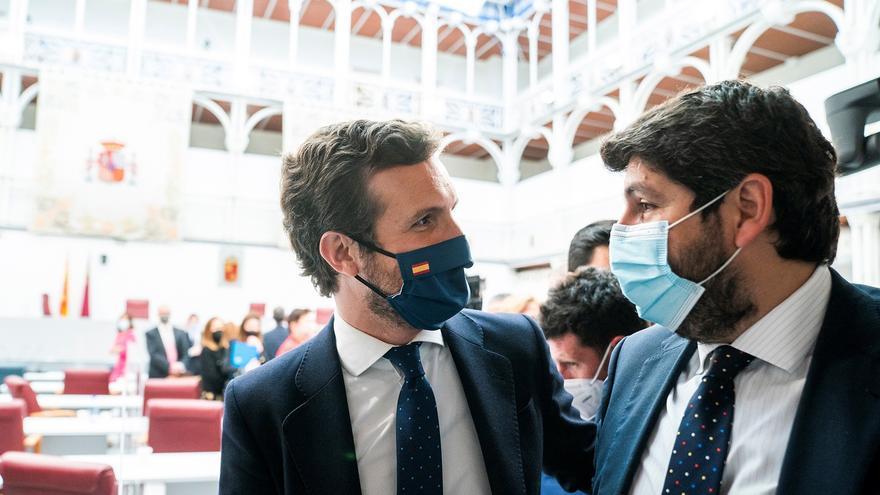 The PP adds the anti-transfuguism pact to the institutional blockade poker that has chosen as a strategy of attrition to the Government. Those of Pablo Casado refuse to renew the General Council of the Judiciary (CGPJ) more than 1,000 days after the expiration of his mandate. Nor do they want to negotiate the replacement of the Ombudsman, of magistrates of the Constitutional Court or of some pending changes from the Court of Accounts. Now, the PP refuses to rejoin the Pact for Institutional Stability and Fight against Political Transfuguism, from which it left after the failed motion of censure in Murcia, if the rest of the member parties do not agree to modify the regulations and operations from top to bottom of the same, which was launched in 1998, during the first Government of José María Aznar.

This is stated in a letter dated September 15 and signed by the person in charge of municipal policy of the PP, Raquel González Díez-Andino, in response to a previous letter sent by the Minister of Territorial Policy, Isabel Rodríguez, precisely to request the PP to rejoin the pact. In the letter, to which elDiario.es has had access, Díez-Andino says that her intention is to open a “more ambitious stage with no perverse effects”, despite acknowledging that she herself signed the third addendum to the pact a year ago, dating from the last century.

In fact, the PP was a promoter of the known as anti-transfuguism pact. And with Mariano Rajoy, Pablo Casado’s predecessor at the head of the party, as Minister of Public Administrations, responsible for putting it into operation. Thought at first to avoid the purchase of councilors that would modify the majorities in the municipal plenary sessions in the heat of the reform of the land law, it was renewed in 2000 (still with the PP in the Government and Jesús María Posada at the helm of the Ministry). The second addendum is from 2006, with José Luis Rodríguez Zapatero at Moncloa.

Despite being a promoter and having signed the addenda until a year ago, the PP now repudiates the entire legal corpus emanating from two decades of agreement that, in addition to the PSOE, has always had the support of the vast majority of the parties with representation. But those of Casado now consider that “the current wording” is “insufficient”, so they propose to “reformulate its principles” so that the pact “gains in efficiency, enjoys a greater range of normative instruments at its service, is equipped with operating mechanisms that are much more transparent, more equanimous and also so that their decisions move away from political power and, in this way, avoid the politicization of their decisions and their possible instrumentalization “.

And the letter signed by Díez-Andino continues: “The composition of the Committee of Experts is far from being independent, impartial and neutral and for this both its composition and its resolutions must be far from the political parties and thus avoid the political instrumentalization of their decisions “.

“Transfuguism and institutional stability are not synonymous concepts,” says the letter. And he adds that “if the Pact is due to Institutional Stability, it needs a conceptual readjustment” to accommodate it to the “constitutional mandate that very clearly states that ‘the members of the Cortes Generales will not be bound by imperative mandate.” A principle that has been in force since 1978 and whose compliance is quite weak in Spain.

To address these issues, Díez-Andino concludes, the PP requested “that the Follow-up Commission of the Pact for Institutional Stability be convened, a request that was not addressed.” And he adds that “neither was it the suspension of taking into account the issues pending by the Committee of Experts, which was ignored.”

And why is the PP now challenging what seemed good to him in 2020, in 2006, in 2000 and in 1998? Murcia’s motion of censure changed everything. The PSOE and Ciudadanos proposed a change in the Government of the Region that left the PP of Fernando López Miras out of the Executive. Murcia is also the community of the secretary general of the PP, Teodoro García Egea. The blow to Casado’s leadership, which had suffered a severe setback in the Catalan elections a month before and in which Vox doubled their votes, could be definitive for their future.

But the motion derailed. Three of the Citizens’ deputies who signed the initiative declined and they ended up sitting in the Governing Council of Murcia, against your party’s guidelines. This was stated by the representative of Ciudadanos in a meeting of the anti-transfuguism pact, as stated in the minutes of the appointment. The representative of PP voted against of a resolution that recognized as turncoats the deputies who allowed them to maintain the Murcian Government. Having voted in favor would have meant disavowing its own regional president. As the representation of each party is weighted according to the institutional representation, the no of the PP assumed that the necessary majority to make a decision was not reached.

The matter ended up in the committee of experts of the pact, which did qualify as turncoats to the Murcian president and the former deputies of Ciudadanos by virtue of the different documents that make up the corpus of the Pact for Institutional Stability. These experts agreed that the deputies were effectively turncoats based on the addenda signed by the parties. The PP then announced that it was abandoning the pact.

Without the PP, the anti-transfuguism pact it does not make sense, since one of the formations with the most representation in the entire State is left out. Hence the efforts of the PSOE and the rest of the parties to return to the calls. But those of Casado now demand a commitment to modify the rules to return to sit with others, an approach that the government has already rejected. Something similar to the last proposal made by the PP to renew the CGPJ, which already accumulates more than 1,000 days with Carlos Lesmes at the head of the institution with expired mandate.

In both cases, the PP makes an amendment to the entire system of election or operation of which it is not only a doing part, but has never modified in the terms in which it now demands when it has had the opportunity to do so.