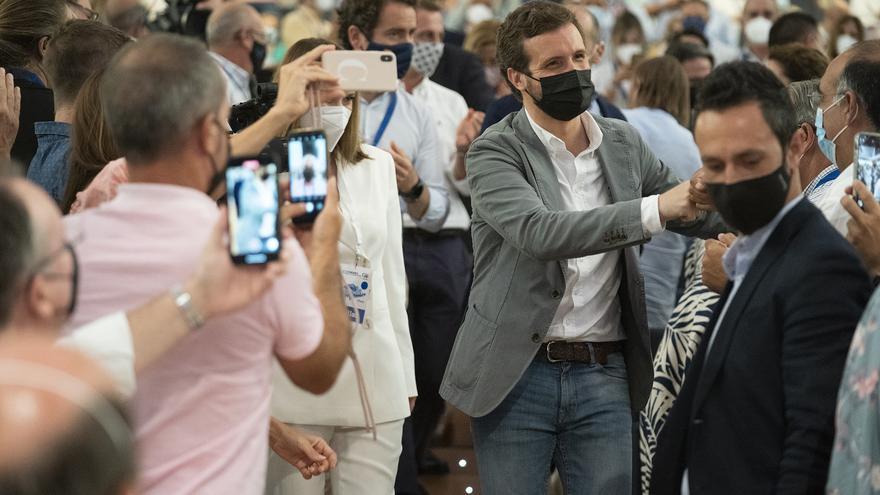 Last spring, the Popular Party presented its campaign against the government's pardons to the pro-independence leaders as his main strategy to try to bring down the Executive of PSOE and United We Can. In a plan identical to the one proposed in 2006 by the PP of Mariano Rajoy, in that case against the Catalan Statute, Genoa 13 launched a collection of signatures, it was proposed to take to the streets and announced resources before the courts to stop the pardons to the that the popular call "delinquents", who "carried out a coup" against Spain for their participation in the independence process.

The fiasco of the campaign launched by the management of Pablo Casado –Which failed to paralyze the pardons and did not achieve massive social adherence to its plans– has instead forced the main opposition party to relegate its actions against the grace measures and to rethink its strategy, now focused on temporizing with the extreme right in matters such as immigration or revisionism about the Civil War or the dictatorship, with the aim of recovering the electorate that fled to Vox in recent years to consolidate the rise in the PP polls.

Of the plan against pardons to the pro-independence leaders only the appeals before the Supreme Court are still fully alive presented by the PP, but also by Vox and Ciudadanos.

The only street mobilization that the PP supported against the pardons was that of the Plaza de Colón on June 13. And it was a failure for the popular, since the protest, called by a platform led by former UPyD leader Rosa Díez, was hegemonized by the extreme right. Vox supporters came to boo Casado himself, who did not even reach the center of the mythical Madrid square where the union of the three rights was reproduced - because the leaders of Vox and Ciudadanos also attended - two years after the first photo joint, 2019. Given what happened there, the PP has not called any other demonstration or concentration against the pardons.

The main setback for the popular has been, in any case, the collection of signatures. The latest figure offered by Casado's management is that, until July, they expected to achieve 500,000 rubrics. Therefore, the 800,000 militants that the PP claims to have always when asked for membership figures would not even have signed. The collection started on June 1, so it has been almost two months.

In that same period, in 2006, the PP had obtained several million signatures against the Statute. And, finally, the then leader of the popular, Mariano Rajoy, presented in Congress four million, collected in just four months.

Casado's management is aware of the fiasco and has not mentioned this collection of signatures in their public statements for weeks, in which the war against pardons has been losing weight in favor of other attacks against the government, which the PP insists on linking with Venezuela, Cuba and "the heirs of the political arm of ETA", as the president of the popular has come to maintain this week.

In his last intervention, on Tuesday, during a conference on "populisms", the PP leader limited himself to accusing the Government of "dividing" the Spanish "into first and second class", depending "on whether they live in a governed territory. by independentistas that maintain to Sánchez in the power ". "Bad business for the equality of all citizens, criminals are pardoned and those who follow the law despise them," he said.

The PP website It no longer shows the signature counter that could be seen at the beginning of the campaign, and there is only a secondary link to the Change.org platform page in which the popular ones facilitated the compilation of rubrics online. In that portal, the registered firms only amounted to 59,113 at the close of this edition. In addition, the management of Casado has stopped installing its signature collection tables on the streets of different Spanish cities.

The last time Genoa 13 made an explicit mention of pardons in its internal arguments was two weeks ago. In its slogans –which the Casado leadership sends every day to all their positions to be repeated in their public speeches–, the PP leadership insists that these pardons to the pro-independence leaders represent a "democratic outrage" against "the thousands of Catalans who have seen their heritage, freedom, security and coexistence attacked ". "The pardons have been useless, only so that the independentistas have gathered energy to continue with their plan to break with Spain," says the popular leadership.

Before its main leaders, Casado made a show of his speech, which has veered to the right again, during the National Board of Directors -Maximum body between congresses- last week, which took place in Gredos (Ávila) coinciding with the third anniversary of his triumph in the 2018 primaries.

"No opposition in Europe has had such a radicalized government, so obsessed with power and so reluctant to agree. Sánchez only understands well with the communists, the independentistas and the batasunos, because they think only of their own interest, and they sell themselves not to the pact, but to barter, as if the State were a great souk, "he said, raising the tone against the left again.

"With us you will never want to understand each other because we do not want anything for our own benefit," he added. "Our conditions are neither pardons, nor approaches of prisoners, nor collusion with banana dictatorships, nor millionaire transfers. We only put the general interest of the Spanish ahead."

"He [en alusión a Sánchez] He agreed to be the figurehead on the antipolitical pirate ship, a vessel in which nationalism was at the helm and to which Podemos inflated the sails. But now it is a ghost ship adrift, waiting for the next electoral storm that will destroy it. The measures of grace to those who gave a coup d'état or the prison benefits to ETA murderers are the sample of the worst political and moral degradation, "said the leader of the PP. Nor then did Casado make a single mention of the collection of signatures initiated for his party against those pardons, which different popular leaders consulted by this newspaper consider to have already been settled.