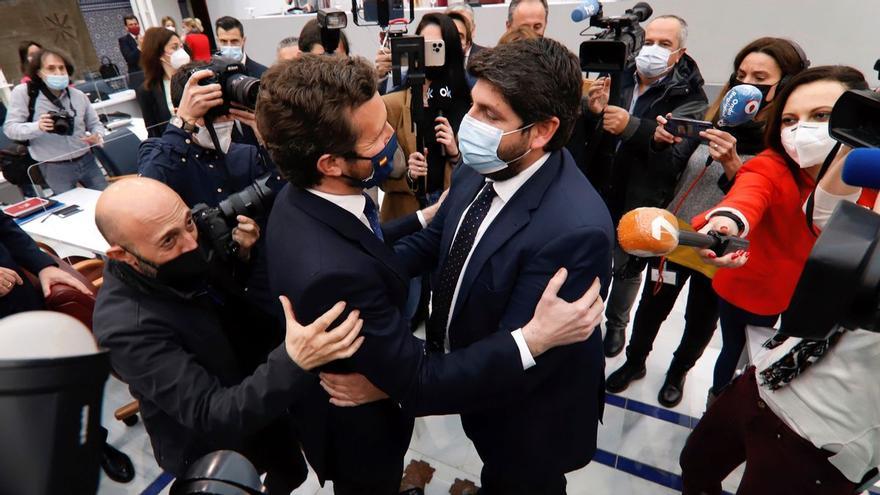 The PP abandons the antitransfuguism pact in a trick so that the Murcian president, Fernando López Miras, and the Citizens deputies who truncated the motion of censure against him are considered turncoats. In a letter sent by Pablo Casado's party to the Ministry of Territorial Policy and Public Function, he informed him that the conservatives left the pact in April due to the refusal of Miquel Iceta to summon the commission to monitor the pact within a period of time. 48 hours. The PP argues that its departure invalidates the agreements reached within the anti-transfuguism pact regarding the operation in the Region of Murcia, where the motion of censure agreed by PSOE and Ciudadanos failed after several deputies from the formation of Inés Arrimadas voted in against in exchange for being part of the regional government.

The Popular Party conveys to the ministry, which is responsible for the commission to monitor the pact, its "surprise" for receiving "a report issued within a pact whose reports, agreements and resolutions are invalid as it does not have a majority. necessary of representatives of the Cortes Generales ". The letter signed by the head of local politics of the PP, Raquel González Díez-Andino, maintains that the party left the pact in April as a consequence of the fact that the meeting of the commission to monitor the same was not convened as it had requested in two writings of March 30 and April 8.

"Having breached by that minister his obligation to convene the Commission for the Follow-up of the Pact for Institutional Stability, having ignored the requests that were made to him, and tortiously using the agreements signed, the political formation that I represent, and this from the last April, it is not part of the aforementioned pact, "says the conservative leader. The letter maintains that in a previous letter the PP warned the ministry that it would "consider the Pact denounced" if that meeting was not convened within two days and that it warned that any decision taken later would not be "valid" when taken without the necessary parliamentary majority.

The other argument of the PP is that the resolutions adopted within the anti-transfuguism pact only apply to the parties that have signed it and, therefore, it considers that in this case the circumstances do not exist because it had already denounced it and, therefore, abandoned. "I must tell you [prosigue la carta de González a Iceta] that we can neither share, nor assume, nor assess, nor accept the unilateral qualifications that, in relation to the assumptions that, has been analyzed or analyzed in the future, the Committee of Experts and the Monitoring Committee in relation to the elected positions of the Popular Party, and this since April of this year, because the current pact lacks the consensus of a qualified majority of representatives of the General Courts, "the letter concludes.

The commission of experts of the anti-transfuguism pact concluded that the attitude of the Murcian president, Fernando López Miras, who offered positions in the regional government to the representatives of Citizens to vote against the motion of censure that they had signed so that their leader was invested, was may consider transfuguismo. The parties that are part of the pact, except the PP, assumed that report. The reason why Casado's party had requested the convening of the monitoring commission to challenge Rafael Ibáñez Reche, a former IU deputy, as a member of the expert committee in cases that had to do with the PP. In this case, he was the rapporteur for the resolution and the commission did not consider his challenge pertinent.

The anti-transfuguism pact was signed in 1998 by PSOE, PP, Izquierda Unida, Convergència, ERC, and about a dozen autonomous parties, it had two renewals in 2000 and 2006. Since then it was frozen for several years and in 2020 the Government of Pedro Sánchez it reactivated it and invited the new political formations to join. Until the abandonment by Genoa, it was made up of the PSOE, Popular Party, Podemos, Izquierda Unida, Esquerra Republicana de Catalunya, PNV, BNG, Canary Coalition, Aragonese Party, Union of the Navarrese People, Citizens, PSC, Asturias Forum, Regionalist Party of Cantabria, Compromís, Geroa Bai, Galicia en Común, Catalunya en Comú, Más País, Equo, Mes per Mallorca and the Socialist Association of La Gomera.