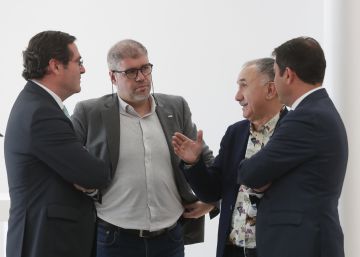 The agreement between PSOE and United We have had conflicting effects on social agents. While in the unions they applaud the pact, which is in line with their wishes, in the employers' associations they are suspicious, who call into question the possibility that some economic ministries will fall into the hands of the party led by Pablo Iglesias. In this sense, the main concern is represented by the energy companies, which ask that the Ministry for Ecological Transition change tenant, especially for the management that can be done of the Energy and Climate Plan prepared by the previous Government of Pedro Sánchez, According to industry sources.

The employers, however, have preferred not to pronounce themselves in a taxative way, waiting for it to culminate in knowing its details. They will do so clearly next Wednesday, November 20, when the executive committee and executive board of the CEOE meet, which are the bodies in which an evaluation of the latest political events will be made. The agreement has surprised its president, Antonio Garamendi, in Cuba, accompanying the King.

"In a context of deceleration, in which for CEOE and CEPYME it is essential to talk about budgetary rigor and economic orthodoxy, businessmen reiterate in any case our commitment to the formation of a stable and moderate Government and insist on the need to advance pending reforms embodied in the priority document that we sent to all political forces before the November 10 elections, "says the employer in a statement.

Among them, there is the commitment to training, innovation and digitalization, pensions, internationalization, the promotion of sustainability, more competitive taxation, market unity and industrialization.

The joy has reached the headquarters of the unions when they have heard about pre-agreement between the PSOE and United We can to form a Government. "Good news that can take the country out of the situation of political blockade," said the secretary general of CC OO, Unai Sordo. "We welcome this agreement and the speed of it", said his UGT counterpart, Pepe Álvarez. Much more icy has been the reaction of the employer CEOE, has announced that until November 20 will not meet its governing bodies will not make an "evaluation of political events."

Already after the previous elections, the unions demanded an agreement such as the one on Tuesday that the president of the acting Government, Pedro Sánchez, and leader of the purple formation, Pablo Iglesias. They demanded not to reach a second election. They did not get it in summer, but now they have put aside the reproaches. "We need to know, of course, the programmatic content of that agreement," said Sordo, “We must seek more parliamentary support because it is not only an investor agreement but a legislative action that has to last four years, but logically the assessment of CC OO is very positive because the risk of a new political blockade would lead to this country to a dead end ”.

After these words, the statement of the leader of CC OO continues to demand the correction of the labor reform, changes in the pension system and "an in-depth tax reform". Álvarez, for his part, has claimed that gives way to a Government that is committed to job creation, the environment, industrial policies, three outstanding elements of the text signed by Sánchez e Iglesias at noon.

Before even that act, Álvarez had already opted for that option in an RNE interview: "This is the Government that needs Spain. It has been seen that a progress program could be formed, a program that looks for people, for the wealth distribution ".