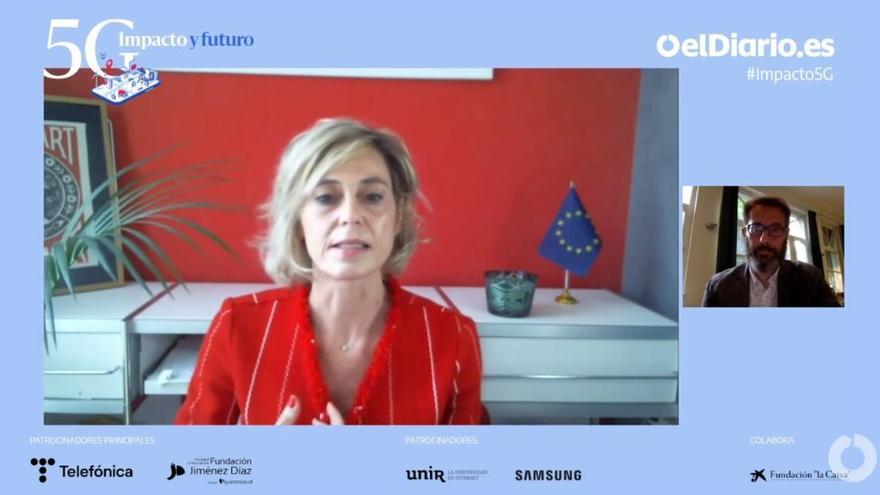 elDiario.es has organized this Wednesday a day of debate on the impact and future of 5G, on the eve of the auction of the frequencies that will be held in July by the Ministry of Economic Affairs and Digital Transformation. As the director of the newspaper, Ignacio Escolar, recalled during the presentation, an investment of 2,000 million euros is planned for the necessary infrastructures. The purpose of the event was to expose how this technology is going to affect our lives and how we are going to notice the changes.

The Secretary of State, Roberto Sánchez, opened the session by recalling that the technological evolution that 5G will entail is a process that we have already gone through as a society, such as 4G, although the new generation has greater potential. “5G will change our lives as much or more as 4G changed them, not so much in our personal communications, which will increase their speed, but it will be very disruptive in machine-to-machine communications, without human intervention”, has explained: “This is what is going to transform many of the production processes.”

This transforming potential of the economy, which can extend from fields as diverse as autonomous cars or the agricultural sector, increases the importance of cybersecurity, Sánchez recalled. With the aim of strengthening the Secretary of State for Telecommunications, it is preparing a 5G cybersecurity law that it hopes to present to Congress next fall. “We are all seeing the attacks that exist with current technologies. In the field of 5G, cybersecurity must be dealt with in a specific way and that is why the law is so important, ”said Sánchez.

“The interesting thing is to advance with technology”

The first round table has focused on the most basic aspects of 5G. Under the title “How will our lives change?”, The speakers, Daniel Ollé, deputy director of the Telecommunications Directorate of the CNMC, Cayetano Carbajo, Director of Core, Transport and Business of Telefónica, Carmen Sánchez, Director of Regulation and Policies Publics from DigitalES and David Alonso, director of the Mobility Business at Samsung Electronics Iberia, agreed that it is still too early to make big predictions.

“We can guess some things, but the interesting thing is to advance with the technology,” said Ollé. “With 4G there are many applications that we have discovered along the way. For example, WhatsApp. The potential is very great ”.

Ollé explained why the auction system was chosen to bring the frequencies to the market. “It is a public resource that must be put in the hands of private companies. With the auction we avoid complexity: no one can argue why the winner wins. It is the method used in all the countries of the European Union ”. “As much as we extend the technology, whoever is left out remains unsatisfied. It’s something we have to work on ”, he added, referring to the possible digital divide between cities and the rural world.

The Director of Regulation and Public Policies of DigitalES has highlighted that Spain is one of the countries with the most pilot projects underway to test 5G, only behind Germany. Among others, he mentioned the Barcelona Smart City 5G. “If this network is going to be successful, it is because it is going to meet a series of real needs,” he said.

How 5G can affect the individual and collective freedoms of citizens and society has been the subject of debate at the second table in the morning. “5G gives us a great opportunity for optimization, but it also carries risks and we will have to protect ourselves much more,” explained one of the speakers, Lucía Velasco, director of the National Observatory of Technology and Society.

This optimization and improvement of efficiency can be carried out thanks to the greater presence of sensors and the extension of the so-called Internet of Things, which requires extreme precautions regarding privacy. “All data must be anonymized,” asked Francisco Hortiguela, CEO of Ametic. This aspect will be key in aspects such as health, so that the citizen is “owner of their data and donor of knowledge,” he added.

The table had a specialist speaker in the most practical part of 5G, Juan Carlos Fernández Galindo, co-founder and CEO of LeoRobotIA. This company is developing artificial intelligence that will be able to automate some of the journalists’ jobs, something that connects with the potential of 5G to automate many production processes. “What a journalist robot can do is complement and improve the journalist’s work. The journalist is freer and more independent because he has more time to investigate ”, he explained.

Health, the focus of this technological advance

Advances in healthcare are often cited as the great revolutionary potential of 5G. The reality, the myths and the edges about this potential have centered the debate at the third table in the morning. “The collective imagination places 5G as the possibility that someone in Boston [EEUU] operate someone in an operating room our country. But you have to demolish myths and think about what is useful and not only what is possible ”, asked one of the speakers, Javier Arcos Campillo, medical director of the Jiménez Díaz Foundation.

In addition to these remote operations, the main change that this connectivity technology can bring about is to “change the paradigm”, stop conceiving the hospital as a physical place where you go when you are sick and start seeing health as monitoring constant, has exposed Arcos.

This can be done through sensorization that allows patients and doctors to anticipate ailments. This process that adds many new technologies to treatments can generate rejection in some citizens, so it is advisable “to avoid overwhelming people with the potential of technology and to pair the whole process with empathy and emotional intelligence,” he explained. Javier Parra, deputy director of the Higher School of Engineering and Technology of the International University of La Rioja.

But not only health can have radical changes. The relationship of people with machines and with the labor market can also undergo modifications, which is why the speakers at the table consider it appropriate to introduce changes in the educational system. “We have to focus on what we can do, on everything that has to do with creativity, with critical thinking, and increase attention to care as much as possible,” asked Yolanda Rueda, president of Cibervoluntarios.

“The main wish with 5G is that Spain can take advantage of its economic pull,” recalled Federico Ruiz, director of the 5G National Observatory. That this push does not focus only on large population centers, the expert has wished, and improve the efficiency of all populations so that they can take advantage of the potential of this technology.

The Secretary General for Industry, Raúl Blanco, closed the day by explaining the “unique and exceptional opportunity” that European funds will provide for the transformation of our country. The Ministry has around 16,000 million euros allocated, which will be dedicated to the modernization of the business ecosystem.

“Despite the severity of what we are experiencing, there has never been a way out of the crisis like the current one. We are facing a very different scenario from the previous crisis ”, he stated. “Monetary policy is totally expansionary, the financial sector is completely changed and in view of this, national recovery plans are drawn up. Spain is the first country to benefit from the European Union and the first to have its recovery plan approved ”.