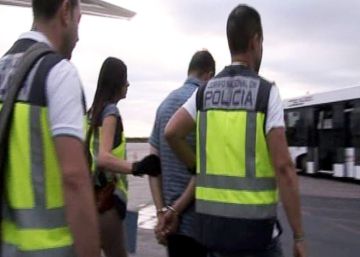 Nidia Rodríguez disappeared in the summer of 1997. Eight months later her body was found in a ditch in Castelldefels (Barcelona). The alleged murderer fled the day after the woman's disappearance and was arrested in the United States 20 years later. This Thursday afternoon a popular jury has unanimously pleaded guilty to R. A. B. for the murder of Nidia Rodríguez. The process, which lasts since the disappearance of the victim in 1997, has been seen pending sentencing until the judge decides the final verdict. The accused can face a maximum of 25 years in prison at the request of the Prosecutor's Office.

The jury has considered proven almost all the facts of which accuses R. A. B, who has listened to the verdict without barely flinching. These include the charge of aggravated murder of treachery – that is, with intent to cause harm and without the possibility of the victim being able to defend himself; and his subsequent flight to the United States.

The defendant lived under a covert identity in New York City for two decades, from 1997 to 2017, months before the crime expired and his arrest occurred. The suspect had shied away from Spanish and US justice by supplanting his real name with his second surname. The authorities of the North American country discovered the identity fraud just when the case of the murder of the victim was reactivated.

Nidia, of Colombian nationality, maintained a sentimental relationship with her alleged murderer between 1996 and 1997. After breaking the relationship, the victim said she was afraid of the numerous phone calls and the follow-up that RAB carried out in places she used to frequent, such as the victim's sister testified. The night before her disappearance, the alleged killer threatened her while the woman was in her car. A friend of the victim narrated in her testimony how she declared "feeling afraid" of her ex-partner, and how she asked him to accompany him on the street. Only 24 hours later, Nidia went down to the street from her house to tend to her former partner and never returned.

When verifying that the date of the statute of limitations for the crime was approaching, the court number 2 of Gavà (Barcelona) opted to reopen the case in coordination with the Police Headquarters of Catalonia. "We restarted the procedures from the beginning and we came to determine by social networks that the main suspect was still living in New York," says one of the researchers who reactivated the case. The reinstruction of the case coincided with the arrest of R. A. B. in the United States for falsifying his immigrant documentation.

The daughter of the victim has declared to be satisfied by the popular sentence and by the penalty imposed by the Office of the Prosecutor, of 25 years. It is practically the maximum penalty that can be granted for this type of crime. 27 women have been killed by their partners or ex-partners in Spain so far this year, according to the balance of the Government Delegation for Gender Violence, updated to July 2. 1.001 since official data is registered, in 2003.

The telephone number for victim assistance is 016, it does not leave a trace on the invoice, although it is necessary to delete it from the call register.