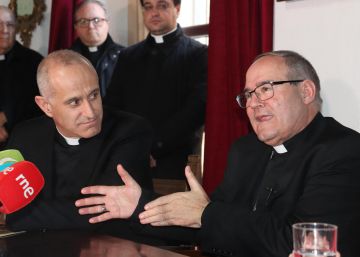 An ecclesiastical anomaly, which faces the archdiocese of Toledo with the dioceses of Extremadura, is about to be resolved. It is the territorial belonging of the sanctuary of Guadalupe and its region. They are part of Extremadura (and the virgin of the same name, the civil patron of Extremadura autonomy), but ecclesially dependent on the Manchego archbishopric, in the past one of the most extensive of Christianity thanks to its national primura, which granted him possessions in all of Spain and the rank of prelate of the West Indies.

Since this morning, the new primate, Francisco Cerro Chaves, Extremadura by birth (Malpartida de Cáceres. 1957) and Bishop of Coria-Cáceres since 2007, is in favor of Toledo returning Guadalupe to Extremadura. He has repeatedly expressed it and Pope Francis, who is the one who appointed him, is supposed to support that position.

At 12.16, the bells of the primate cathedral announced the appointment of Cerro Chaves as the substitute forArchbishop Braulio Rodríguez Plaza (Aldea del Fresno, Madrid. 1944), who retires without having been named primate cardinal. They have been their predecessors for centuries, almost always indicated as the favorite of the reigning pontiffs, among others Cardinals Ciriaco Sancha, Enrique Pla and Deniel, Isidro Gomá, Marcelo González, Vicente Enrique y Tarancón or Antonio Cañizares.

Braulio Rodríguez, in office since 2009, has retired without a cardinal's hair, and the anomaly is explained by two reasons: Francisco's idea of ​​distinguishing with that title - they are still and believing Princes of the Church - the personality of their headlines, more than the rank of the archbishop's headquarters. But also the expression of rejection for the positioning of the already squeezed before the reforms carried out by the Argentine pontiff, from which he feels distant along with much of the Spanish episcopate.

The outgoing archbishop has also opposed, with energy, the return of Guadalupe to Extremadura, mutilated as an Autonomous Community in its facet of Ecclesiastical Province despite the agreements signed by Spain in the Vatican in 1976 and 1979 say that the territorial division of the Roman Church in Spain will correspond with the provincial of the State. With one exception: the Seo de Urgell, which also groups the Principality of Andorra.

The new primate has pastoral experience and great knowledge of the archdiocese of Toledo, in whose seminary he studied and was ordained a priest in 1981. For months he sounded for the position and that he was pointed out in Extremadura as the prelate destined to solve, once and for all, the stumbling block of the sanctuary of Guadalupe and its region.

Currently attached to the moderate line of the episcopate, Cerro was in his youth part of the so-called "bishops of the Sacred Heart", a group formed in Toledo of which two prominent conservative prelates were also members, José Ignacio Munilla (prelate of San Sebastián) and Demetrio Fernández (Córdoba). The pastoral and reality of one of the poorest dioceses in Spain, such as Coria-Cáceres, separated him from that group. It is the first episcopal appointment of the Bernardito Auza era, the Filipino prelate who has just assumed the nunciature (embassy) of the Pope in Spain.

Doctor in Spiritual Theology from the Pontifical Gregorian University of Rome, Cerro is a founding member of the Priestly Fraternity of the Heart of Christ and founder of the Cor Iesu Secular Institute. He worked pastorally in Valladolid and was bishop of Coria-Cáceres since June 21, 2007.

In the Episcopal Conference he has been a member of the Commission of Missions and Cooperation between the Churches since 2017. He has written a hundred books, some translated into several languages ​​such as French, Italian and Portuguese, among others.