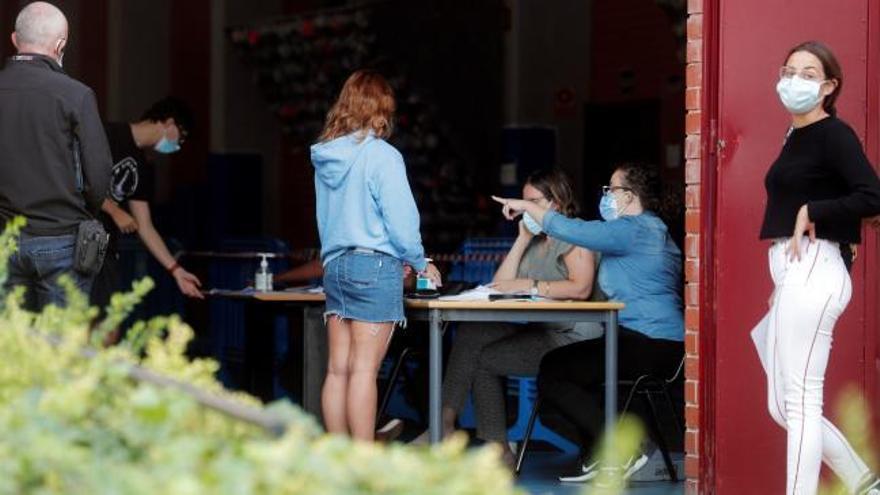 The Polytechnic University of Valencia decided last night to suspend all face-to-face classes on the Vera campus from this Monday before the outbreak of covid-19 cases recorded after PCR tests among almost 700 students. Last night the academic institution communicated this measure by email, both to students and teaching staff.

On the campus of Vera they study almost 25,000 students , including the Gandia and Alcoi centers. Late at night he made public a statement in which he recalled that massive PCR tests were carried out last Friday after detecting a series of infections of covid-19 in UPV students related to the Galileo Galilei, the privately run college that is located on the Vera campus. “So far, the results that are becoming known from these PCR tests show a high level of positives, which should lead health authorities to expand close contact tracing, “the note explained. For this reason, “in accordance with the health authorities with which the UPV is in continuous communication and with the aim of preventing the spread of infections,” it was decided that starting today, Monday, October 5, the teaching of all the degrees of degree, master’s degree and doctorate from the Vera campus go online.

This modality of distance teaching will be maintained as long as traces are made, the scope of the infections is determined and until the health authorities indicate another situation, explained the UPV. The rest of campus activities are maintained normally. The Vice President for Students, Culture and Sports has asked students to maintain all possible precautions (distance, mask and hand hygiene) to avoid contagion.

The facilities deployed at the UPV for the practice of the 700 PCRs that were carried out on Friday could remain active for a time, and not only at this university. According to the Public Health forecasts, positives could easily exceed one hundred, which prompts the health authorities to undertake a gigantic tracking effort to delimit the advance of the virus. As Galileo Galilei himself confirmed yesterday to this newspaper, among its residents there are students from “all the universities of Valencia” and “from all degrees”, which could force the setting up of screening tents in several of these centers, depending on the infections that are confirmed today. The outlook is not at all optimistic, since as Salvador Peiró pointed out yesterday, director of the Superior Center for Research in Public Health of the Generalitat Valenciana, the number of known positives today, whatever it may be, “will increase” because “there will be someone who is incubating it at the moment” since the PCR can be negative during the first five days after the contagion occurs. This guarantees that the Galileo Galilei students must remain in isolation for the ten days stipulated in the protocol.

But the real challenge arises with the process that follows. Each confirmed case will force the trackers to initiate an investigation of your close contacts maintained for two or three days before the onset of symptoms, at which time a patient begins to be contagious. Peiró detects an added problem here: asymptomatic patients. In these cases, it will be necessary to go back to the day of the proceedings, in this case the holidays, thus expanding the range of possibilities of having maintained a risky interaction and the number of people to be contacted by the trackers. Peiró places the average of close contacts of each infected “between six and eight.” Assuming the positive of one hundred residents, between 600 and 800 more people. To which must be added the possible ramifications of infections arising from any of those hundreds of close contacts. The fact of being students of different universities and majors add more pieces to the puzzle of the tracking, since it will force to assess case by case what is understood by close contact. “The type of classrooms and their ventilation matter a lot,” Peiro highlights to explain why in some cases an entire classroom will have to be isolated and in others, only the students closest to the infected. “And also the teachers, who go from classroom to classroom,” he recalls. The expert highlights as a favorable element that the outbreak “is focused” on the college, which in a way “limits its expansion.”

In any case, the Ministry insisted yesterday before meeting the suspension of face-to-face classes at the UPV, in appeal to “responsibility” and it hinted the concern for the results that the results may bring, which should be known today. Health sources pointed out that the percentage of positivity of the tests that have become known – yesterday they did not yet have the total result of the almost 700 PCR – is “higher” than that detected during the first screening carried out in the residence hall. In this first test, twelve positives were confirmed out of a total of 66 tests performed. If proportion is maintained, the number of infected could skyrocket today to 120 or 130 students del Galileo Galilei, which would make the outbreak that originated in an illegal party one of the largest in Spain.

Ten days on the hunt for the virus