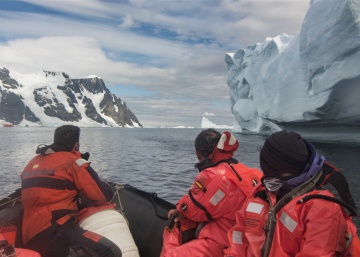 What if there was a place governed by science, where for decades respect for animals and cooperation between countries prevail instead of conflict? That place is not imaginary; it is located on our own planet and occupies the space equivalent to one and a half times Europe. It is called Antarctica and it is a gigantic laboratory in which the climatic impact that will define the future of the human being is analyzed.

Journalist Mario Cuesta, who has traveled half the world working behind the scenes for television programs such as Extreme challenge de Jesús Calleja, was shocked by the miracle that occurs at the South Pole the first time he visited the place. The Antarctic Treaty signed by 12 world powers in 1959 since then protects the region from the negative influence of the human race. Although several Third World countries they will protest in the past Because it was a small group of powerful countries that decided on the exploitation of minerals in the area, the agreement has so far managed to protect its coveted natural resources.

“It seemed like the promised land to me. In addition to being an impressive scenario, it is the place where the most effective environmental measures are being taken and where science finds the largest laboratory in the world. Compared to other countries in which I have worked, marked by the warlike conflict, it is a stronghold for peace and dialogue, ”Cuesta comments by phone. When he returned, he decided to shoot a film that showed the least explored aspect of the region. During the southern summer of 2017, he recorded on board the oceanographic vessel Hespérides the tape Antarctica: a message from another planet, which has just won the Audience Award in the Impact section of the Another Way Film Festival and can be seen on Movistar + and on Filmin. “There are quite a few documentaries about Antarctica, but almost all of them focus on nature or scientific research and there is little talk of its prodigious political organization. When attempts have been made to modify this spirit of the treaty in these 50 years, it has been the international community itself that has been in charge of countering these predatory impulses of man and protecting his essence ”, explains the director.

La Antarctica de Cuesta, which collects testimonies from those who live and work in it for several months a year, is also a tribute to all the engineers, cartographers and designers whose efforts save lives and make possible great human deeds, although they do not usually appear the photo. His particular exploration of the unknown continent analyzes more general questions, "such as what really drives the advancement of the human being," says the journalist.

Another challenge for the region is to control the exponential increase in tourism. It has gone from 45,000 visitors in 2017 to 75,000 in 2019, which can contaminate, in the broadest sense of the term, this oxygen bubble in the south of the planet. The biggest challenge in completing the film, with a technical team reduced to a minimum, has been precisely to adapt to the strict and necessary protection measures of the continent, which restrict freedom of movement as much as possible and forced the team to readjust its agenda. shooting several times a day.

But the Antarctic recorded by Cuesta is not perfect. For example, there is also misogyny in it, with few scientists in command positions, although the documentary makes it clear that these defects come as an inheritance from the other side of the world. "Can society be changed from science?", He asks at one point a Chilean scientist. "Of course, that's why we're here," she replies. Without wanting to be idealistic, the director does admit a "need to believe in the naive in a world ravaged and besieged by war and pollution."

Cuesta has also launched an illustrated children's book, Antarctica: the continent of wonders (Mosquito Books publishing house), supervised by researchers from the Higher Council for Scientific Research (CSIC) and which adapts the content of the documentary for children. In both cases, it raises the possibility that a kinder human being can improve his uncertain destiny on planet Earth. "We do not defend a simple utopia, because we show an example that is real, in which the great powers of the world have been able to maintain dialogue in a place where there are also economic interests," he defends. “We always look at Antarctica from the point of view of the developed world, but this time I wanted to reflect how the world we live in looks like from Antarctica. If it existed, its inhabitants would look at us with bewilderment and perplexity ”.