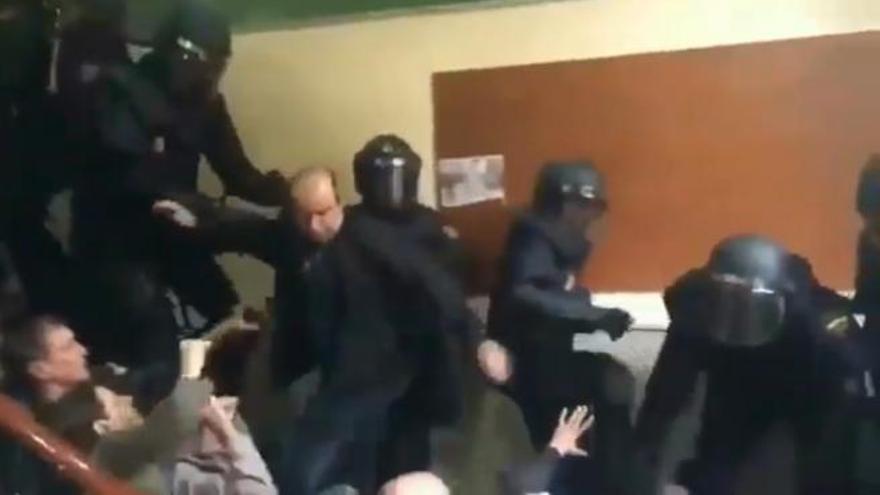 Before the Barcelona judge investigating the police charges against the voters of the 1-O referendum, fifty agents have appeared as defendants. All of them had answered the questions of the judge, the prosecutor and his defense. For the first time this Friday an agent has not done it. This is the agent who experts from the Mossos d’Esquadra have undoubtedly identified as the author of the flying kick against a voter at a school in Barcelona.

According to sources present in the statement, the agent has availed himself of his right not to testify. It was not the first time he had appeared before the judge. In february 2019 already declared as a defendant and the video was not recognized. But then in the case there was no expert report of the Mossos that has motivated his second summons and that cornered him as the only possible agent who committed the attack.

In their statement, the experts of the Mossos have explained to the judge that they have identified the agent of the kick based on two elements: his follow-up frame by frame in the videos that work in the case and the different elements of his clothing (cap, belt, etc.). His identification has been so solid that the defense of the police, who exercises the State Attorney, has already announced while the experts were testifying that the agent was not going to testify. Earlier, the State’s lawyer has questioned the expert from the Mossos, asking the experts, according to the same sources, if they had medical knowledge, despite the fact that their opinion was based on the videos and the elements of the police uniform.

In this Friday’s session, another agent has also declared for his performance at the Dolors Montserdà school in Barcelona. The policeman has acknowledged that he hit a female voter on the legs with the baton, but has alleged that the woman did not let him pass even though he had asked. In his words, it was “a wake-up call.”

The investigation of the cause of the charges of 1-O, which this October has completed three years, faces its final stretch with more than fifty police officers investigated. The judge is waiting to decide how many agents of the National Police will sit on the bench. But first, the Barcelona Court has to decide the numerous appeals that the accusations have raised, among other issues to accuse more police officers against what the judge agreed.