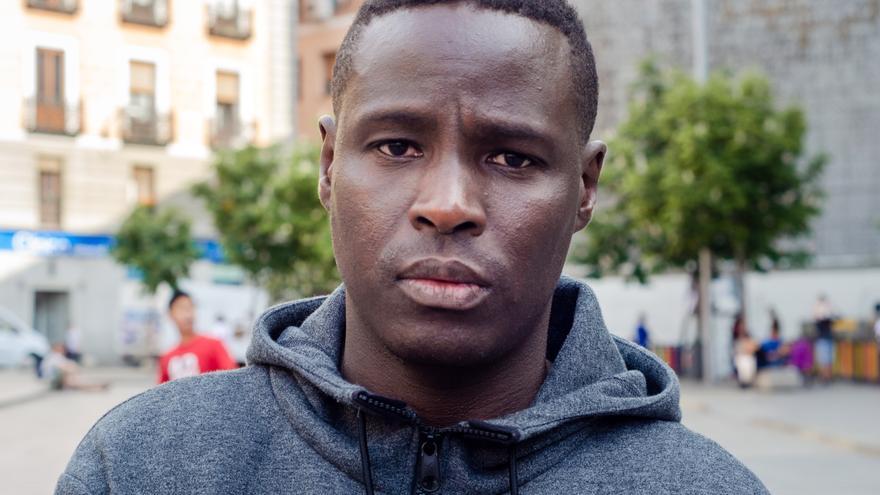 Several unions of the Municipal Police of Madrid insist that Malick Gueye, spokesman for the Manteros Union in the capital, is condemned for his statements after the death of Mame Mbaye in Lavapiés in 2018. As elDiario.es has been able to verify, two of the accusations have appealed his acquittal Before the Provincial Court of Madrid while the Prosecutor’s Office, which also requested that Gueye be sentenced, has decided not to appeal although it can still adhere to what the popular accusations say.

Senegalese Mame mbaye He died at the age of 34 in Madrid’s Calle del Oso, in the Madrid neighborhood of Lavapiés, in March 2018. Mbaye had been in our country for more than a decade and at that time he was running away from a control by the Municipal Police against manteros In the city center. The Senegalese suffered from heart disease and his heart stopped without the emergency services being able to do anything for him. The protests over his death and against the police action turned the Lavapiés neighborhood into a battlefield over the course of several days.

Three people sat a few weeks ago on the bench of the 20 court in Madrid accused of falsely imputing the death of Mbaye to the Municipal Police of the capital: tweeter and journalist Alfonso ‘Fonsi’ Loaiza, the spokesman for the Manteros Union in Madrid, Malick Gueye, and the owner of a store in the Lavapiés neighborhood. The first stated on his Twitter account that “the police have murdered him”, the second claimed in an interview that “the two responsible police officers pay for that” and the third was accused of writing on Facebook: “The sons of bitches of the chilli peppers are responsible for this death and many more. ”

The popular accusation was exercised by several unions of the Municipal Police and even the Prosecutor’s Office asked to convict the three, but Judge José Enrique Sánchez-Paulete significantly lowered his claims. Both Malick Gueye – defended by the lawyer Eduardo Gómez, of Red Jurídica – and the owner of the Lavapiés store were acquitted and the tweeter Loaiza was sentenced to pay a fine of 2,100 euros. Now, as elDiario.es has learned, the police unions return to the charge while the Prosecutor’s Office has refused to appeal although it can still adhere to what the popular accusations say when the case goes to the Provincial Court of Madrid.

The Professional Collective Union of the Municipal Police (CPPM) has appealed only the acquittal of Gueye, spokesman for the Manteros Union in the capital, for whom they even asked for a fine of 16,200 euros. They claim that the Senegalese was not criticizing racism in general terms but that “he was imputing the death of a person to the Municipal Police” and that he did so with “reckless disregard for the truth.” The judge’s decision to acquit him, according to the union, is “peppered with subjectivity” and they demand a sentence for him.

Another of the unions that brought the popular accusation, CSIT, has appealed the two acquittals after having requested fines of 8,100 euros for all the accused. This resource assures that “the Police do not persecute anyone for no reason” and adds that “the reality is that as long as the law does not change, the Police are obliged to persecute them.” This, says the union, “is the heart of the matter since it should matter little if the death occurs because the police are pursuing him or not.” They describe Gueye’s statements as “clearly insulting” and also question the acquittal of the owner of a Lavapiés store for lack of evidence that she was the one who wrote the message.

In this second case, the judge understood that there was a possibility that another person had written the message from the computer that she left in her store while attending a course. The CSIT union explains that it could be written from the course with a smartphone and that, therefore, his acquittal must be revoked. They also affirm that “the fact that it subsequently deletes the message clearly denotes that it has made an assessment of the significance and consequences that said message may have and decides to eliminate it due to its abusive content.”

The Prosecutor’s Office, for its part, has lowered a march with respect to its initial performance. At first he requested a fine of more than 5,000 euros for the spokesman of the Manteros Union in Madrid for insults to the Police, although at the end of the trial he reduced this request to less than half. Now, according to sources from the Madrid Public Ministry, he has resigned to appeal his acquittal although he can still adhere to the appeals that the police unions have presented before the Provincial Court.

In the case of the spokesman for the Manteros Union in Madrid, Malick Gueye, the criminal court understood that he did not try to impute the death to a malicious action by the Police and also questioned that the difficulty with the language prevented him from correctly expressing his ideas in a moment of intense pain for him. In some granted statements to digital 20Minutes Shortly after Mbaye’s death, Gueye demanded “that those who are responsible for Mame’s death pay the consequences, that the two responsible police officers pay for it, and also the City Council. They have allowed these attacks.”

The court understood that at the time he made the statements, the various information about the case already made it clear that he had died by natural causes Although it was not clear whether or not he was fleeing from the Municipal Police, that Gueye was very affected and that, in addition, he expressed himself in a language that is not his own without there being a recording of what he said. The sentence ensured that “a vexatious intention towards the Municipal Police cannot be affirmed, prevailing over the one to criticize the immigration policy.”

The magistrate assures in the sentence that “what is actually stated by the accused is unknown” and also endorsed his right to criticize police repression that manteros sometimes suffer. The sentence now appealed says: “What can be criticized, and the defendant does so in the exercise of his freedom of expression, is that said people are placed on the margins, without papers.”