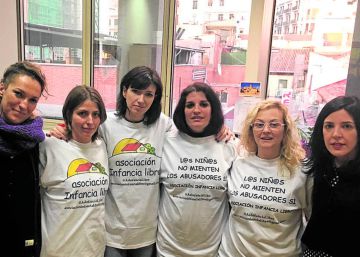 The attached unit of the National Police to the courts of the Plaza de Castilla (Madrid) has referred to the Prosecution a report that points to the association of children's rights Free childhood It operated as a "criminal organization," Europa Research sources confirm. Since last April 1, three women linked to this entity have been arrested, including Maria Seville, its president. A fourth mother, also related to the association, was called to testify.

The Prosecutor's Office must decide whether to open investigation proceedings by grouping the four cases into a single procedure and including other complaints of those affected. Legal sources have indicated that the Public Ministry has yet to study the police report.

The document, which has advanced the SER Chain, consists of about 200 pages and was delivered on July 23 at the Provincial Prosecutor's Office in Madrid. Police investigators point out that the association acted as a criminal network to process complaints about false facts in order to harm parents by having their custody of minors removed.

For this, the denouncing mothers, founders of Free Childhood or linked to this organization, allegedly relied on medical and legal professionals, who were responsible for handling complaints following the same pattern. Evidence has been collected that Childhood directed mothers to a psychiatrist in Madrid and to the same lawyer. In Granada, psychologists acted in collusion with the association, according to the police report.

One of the four mothers involved in the case, Patricia González, explains to the phone that they have not been able to review the report. He adds that the allegations of sexual abuse that they all presented are prior to the creation of the Free Childhood association, registered in January 2016, so that they could hardly process these complaints through that entity. He adds that "no judge considers that these are false allegations. The judges say that we do not lie. In three cases, the proceedings are provisionally dismissed, which means that at any time they can be reopened by providing new evidence." For a judge to consider that there is a false complaint, a new procedure must be initiated.

Regarding the accusation that they relied on a network of specific professionals, González adds that one of them, María Sevilla, has reports of "14 different public and private medical professionals explaining the risk of abuse." In his case, there are four different professionals, two of them consulted before the creation of the association.

On April 1, María Sevilla was arrested for having breached a sentence that gave custody of his 11 year old son to the child's father. He hid with the child, who at the time of the arrest had been out of school for six months. Just over a month later, on May 11, agents arrested a second mother, Patricia González, for repeatedly skipping the visitation regime and for child abduction. In both cases the children were left in the care of their parents.

Days later, on May 21, Ana María Bayo was arrested, accused of hiding her daughter to her ex-partner for two years. In this case the girl is still with her mother, since the father was convicted of a crime of family abuse and an order was taken away from the child.

The fourth woman involved was called to testify on June 18. Dew of the Osa Ibáñez, vice president of the association, was located in Granada. The police accompanied her to the court, where she was summoned for allegedly holding her daughter, in breach of court decisions. De la Osa accepted his right not to testify. The judge agreed at that time as a precautionary measure that the custody and custody of his daughter would provisionally pass to a paternal aunt with girls of her age, cousins ​​of the child.