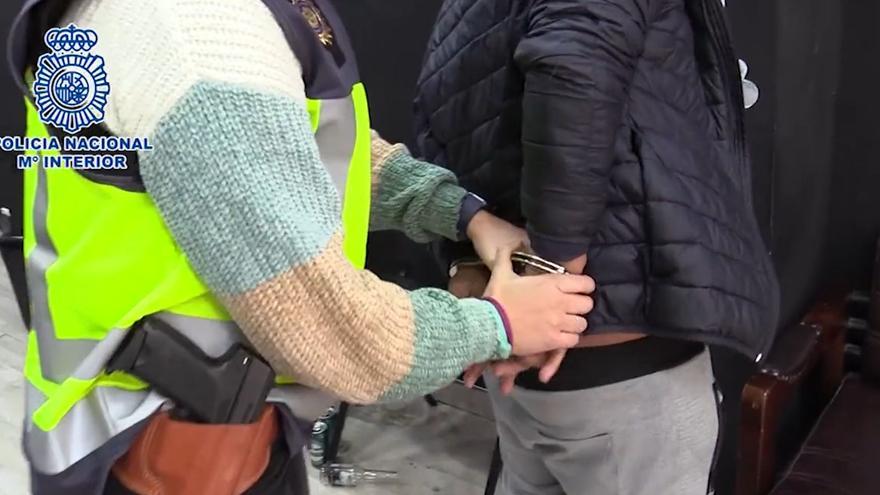 Pimps and sexual predators are very clear that the vulnerability of their victims is a success factor for them. They are looking for young, poor women, without family roots in our country or in an unstructured environment. The more the better. The objective is that, in addition, they cannot escape from their clutches in case at some point they consider doing so, using what the Police call "invisible chains". The judicial documentation to which elDiario.es has had access reveals that, according to the investigators, this is exactly what happened in the case of the minors sexually exploited in the south of Madrid: first they were hooked on drugs and then forced into prostitution if they wanted to continue consuming or if they wanted to continue having the attention of the pimps.

The victims - ten according to the Police press release - shared the same profile and some even knew each other. Several of them were also supervised by the Community of Madrid in centers of the capital and Aranjuez. The workers and managers of these centers helplessly explained to the investigators that some of them constantly absconded as they were in an open regime and that they could not do anything to prevent it. They also told how they came back: hooked on drugs and with their sights set on the next escape. Their relatives recounted how they knew or suspected what was happening but without having been able to provide any solution.

The destiny of these girls throughout 2020 and 2021 was the slum town of San Dalmacio, in the Madrid district of Villaverde, dismantled in September and quickly rebuilt. There the minors were forced, according to their testimony, to submit to the abuse and rape of adult men in exchange for money or drugs. One of them was found sleeping in the doorway of a shack. Another was held for several days in a house where she was raped, she has told investigators. Many mentioned a nickname: the 'Kalifa', the young man who supposedly led the sexual exploitation and with whom several victims were "in love", according to some testimonies.

A report from the chief inspector of the Group XXII of the National Police November of last year analyzes all the evidence in the case and leaves the modus operandi of these groups of pimps black on white. Everything responds, according to the Police, to an organized plan: "A single criminal activity, perpetrated in an organized manner by different people, achieving the approach of underage women, with the purpose of using them for the sale of narcotic substances and, in a parallel, also use them for sexual exploitation," the document explains.

The investigation began when in 2021 a woman went to the Police and reported that an underage girl was being prostituted by her own father in a narco-apartment in Puente de Vallecas. The young woman was located several times in an increasingly precarious state of health. Her statement and that of other girls revealed that, in many cases, the alleged pimps had reached them through Instagram, a social network that they also used to control them. These Instagram messages and the identification of the profiles are the key evidence that has allowed the imprisonment of the alleged leaders, in addition to the statements of the girls.

The first step, according to the Police, was to find them: "They have similar profiles, minors with an obvious lack of maturity, from disadvantaged backgrounds (...) in contexts of school failure, broken families and usually supervised in centers of minors," the report explains. juvenile centers where it is difficult to control their movements, says the Police, "since they are in an open regime" because they are minors who have never committed an infraction. These circumstances, adds the report, "makes them suffer extreme situations, exacerbating their situation of vulnerability and precariousness."

It is at this moment that the pimps make their appearance. They, say the Police, join "the first focus of affection or socio-affective well-being" that is presented to them. Shortly thereafter comes the plan for them to be addicted to drugs: the base cocaine and the heroin are given to them first for free, "as a false friendship", so that they become drug addicts. "Once the minors' addiction has been achieved," says the report, they "accept any of their claims." At first they try to attract more minors but, the agents say, only minors in this extremely disadvantaged situation end up hooked on drugs.

Many of the cases of prostitution analyzed by the Justice have a common denominator: pimps who previously know their victims or their families in their countries of origin and who bring the women to Spain under the false promise of a job or a better life. Once here, they are forced to prostitute themselves in subhuman conditions under the pretext of paying a debt they cannot pay. Depending on their origin, these threats may be infused with voodoo rituals. In the case of minors under guardianship, the system is different: the pimps' best weapon is social networks.

They contacted them, says the Police, "through social networks indiscriminately." Instagram, Facebook or YouTube were some of the platforms. The summary reveals that many defendants contacted them through private Instagram messages to meet them. In other cases, the group, made up mostly of men, allegedly used older women to attract girls to the town and get them hooked on drugs. There are several defendants and they are free without precautionary measures. The third method, highlights the National Police, is that of the 'Lover Boy' who puts "invisible chains" on his victims.

Two of them are in pretrial detention and their nicknames were 'Kalifa' and 'Chuky'. Several witnesses recounted how the first had "very much in love" with one of the victims. The second, according to reports contained in the summary, did the same with another of the underage girls. "Taking advantage of their charms, they try to 'fall in love' with the target minors and thereby generate an attachment, a false situation of affection, economic abundance and promises to take them to a better place," the report describes. It's never like that. They are the ones who get the victims hooked on drugs and normalize the situation of sexual exploitation.

This situation lasted from mid-2020 until the arrest of the accused at the end of 2021, corroborated by the statements of the girls and some witnesses. Some of them were prostituted in the town of Villaverde but also in houses and narco-flats in Puente de Vallecas in exchange for small amounts of money or drugs. In some cases, the Police say, trying to correspond to that supposed relationship: "Taking advantage of that attachment, they are also used for the transport and sale of drugs, once they have generated what is known in the jargon as invisible chains," explains the Police.

In this case, those invisible chains had various manifestations. One of the girls, for example, reported that she was afraid that one of the pimps would come after her if he knew what she was denouncing. Several reported the closeness of some defendants to gangs such as the Dominican Don't Play, and one of them recounted how she was forced to submit to abuse and obligations at the hands of alleged members of the gang as a price for belonging to it. The girls explained that all the men with whom they had to prostitute themselves knew that they had not even reached 15 years of age. Sometimes, they said, they were recorded and their pimps had created internet profiles for them.

These "invisible chains" that the Police speak of in their report were broken as the investigation progressed. The witnesses pointed to the same people, they were able to identify more people and tell what had happened to the other girls. More than 30 people were arrested at the end of last year by order of Court 8 in Madrid, but by then several courts had already launched their own investigations into complaints by more girls about the same group. The one known as 'Kalifa', for example, was already in preventive detention in Soto del Real when the operation broke out, arrested days before for assaulting one of the victims.

In their appearances before the duty judge and the instructor, most of the accused took advantage of their right not to testify and the rest denied the facts without discussing the evidence that has led some to prison: the Instagram messages they sent to their victims and the statement of several girls and witnesses who point directly at them. Most of them were released because of their roots in our country. "I have nothing to do with this," said one of the defendants currently in prison. Another recognized that 'Kalifa' had taken one of the girls to the town of Villaverde.

The day of his arrest, roughly hidden under a blanket in a house between Aluche and Campamento, one of the victims left no room for doubt: "It's him, it's him," he told the police while pointing his finger at him. Another was quite clear when explaining her descent into hell: "Everything changed when I met Kalifa," she said.

The investigation pivots between two courts in Madrid, number 8 and number 23. There were several courts in Madrid that opened proceedings as the girls denounced the situation of sexual exploitation in which they found themselves. The Prosecutor's Office has been clear from the beginning that everything must be instructed in a single court in Plaza de Castilla and the Community of Madrid has announced that it will appear as popular accusation in the case, something habitual in this type of instructions with victims protected by a public administration.