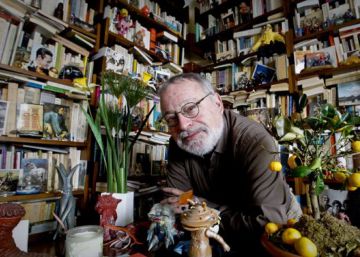 The philosopher Fernando Savater has been distinguished with the bullfighting prize 'Ciudad de Sevilla' in its fifth edition, organized by the City Council of the Andalusian capital, in collaboration with the European Bull Foundation and its Culture, and recognizes people or institutions that stand out for his defense of bullfighting. The ‘Fernando Carrasco Award for Bullfighting Communication’ has been awarded to the RTVE bullfighting program Tendido Cero, directed by the journalist Federico Arnás.

"A great fan of bulls, Savater is a leading advocate of bullfighting both in published texts and in a multitude of public statements," said the Spanish consistory in a note. “Professor of Philosophy and Ethics, Savater is an essential reference for a whole generation of Spain - he adds - for his extensive work of dissemination and cultural criticism, as well as intellectual, novelist and dramatic author, who has excelled in the field of essays and the newspaper article, with the brave bull and its environment as one of the great elements that make up our cultural heritage ”.

Fernando Savater is the author of the work "Tauroética", in which he argues that "ethics does not say in Western tradition that animals and men should have the same views. That is a kind of more or less watery Buddhism that has permeated the ethical tradition in the West. Not only is ethics possible in bullfighting; it is part of the activities that a morally healthy human being can appreciate and practice. "

This award, created in 2015, indicates in its bases that it intends to highlight “that person or institution that has distinguished itself by its approach to the world of the bull as a cultural event, as reflected and recognized in Spanish legislation, as well as in that of other countries in Europe and Latin America. And to recognize, he continues, those who, having excelled at the unquestionable importance of their work and their works, count and have had the brave bull and its surroundings as one of the great elements that make up our cultural heritage and thus communicate it. ”

Likewise, with the intention of highlighting the importance of the communication of the mentioned values, the “City of Seville” Bullfighting Prize also constitutes the “Fernando Carrasco Award for Bullfighting Communication”, which has been awarded to the bullfighting information program of RTVE Laying Zero.

Founded in April 1986, it is one of the most veteran RTVE programs and a benchmark of bullfighting information worldwide. The news, the brave field, other faces of the Bullfight, opinion and information are its weekly supports. It is the only bullfighting program that is broadcast all year and in recent months has increased its duration of around 80 minutes.

The Deputy Mayor Lieutenant of the Major Festivities Area of ​​the City Council of Seville, Juan Carlos Cabrera, presided over the act of proclamation of the winners, who will receive a sculpture by the artist May Perea on Thursday of the next April Fair in the municipal booth.

The jury of the Bullfighting Prize "City of Seville" is made up of representatives of the university, politics, and the media, and in the previous four editions it has awarded Miguel Barceló, the Foundation of Bullfighting Studies, the French city of Arles and the livestock of Miura.