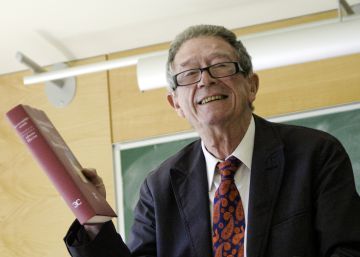 Very few people will be able to conceive the unanimity that Alberto Blecua provokes about his bonhomy and about his finesse as a literary critic. He taught us to edit literary texts with his Manual of textual criticism and with the example of its editions (the Book of good love, the Lazarillo, the Quixote, among the most prominent). From it, the editions could be made with discretion, going beyond the accumulation of variants in critical devices, sometimes meaningless, in order to offer the reader the closest possible text to the author's will. We read a thousand times his Handbook to learn the methodology with which the great authors had been published, especially in Italy, but who had barely arrived in Spain. Alberto Blecua died Tuesday in Barcelona at age 79. Born in Zaragoza in 1941, he was the son of José Manuel Blecua Teijeiro, philologist, linguist and chemist, and brother of José Manuel Blecua Partridges, also philologist and former director of the RAE, institution of which he was a corresponding academic.

Alberto was an insightful and intelligent critic, who wrote original studies on medieval Spanish and Golden Age literature, especially, although he also made valuable forays into the literature of the eighteenth, nineteenth and twentieth centuries. He was against the watertight compartments, of the historian who continues to publish articles for years on the subject of his doctoral thesis (in fact, he only published a couple of articles on his). He defended that it was the variety of knowledge and readings that propitiated the new interpretations, which provided us with the means to relate literary texts to the historical and cultural context, which allowed us to advance in the explanation of those texts.

He declared the admiration of his teachers, José F. Montesinos, Claudio Guillén, Eugenio Asensio, Francisco Rico, despite being younger than him, and, of course, his father, José Manuel Blecua. In addition to so many others that he knew only in his books and on which he claimed the attention of young people philologists. It manifested, however, contrary to the literary theory of modern. More than anything because of the risk that theoretical approaches could become a new scholasticism, a rigid methodology often used superficially and mechanically, unable to explain the texts outside of some parameters established beforehand, to identify the differences , the literary creation. Because he knew the classical and Renaissance theory very well, although he declared himself a historian of a set of texts, linked to a greater or lesser extent to some models and subjected to the great changes we call the Middle Ages, Renaissance, Baroque, etc.

His friends will miss Alberto, with inevitable pain, Alberto, his affectionate character and good humor, but his studies will continue to teach us to read literary works.

Emilio Martínez Mata, Professor of Spanish Literature at the University of Oviedo