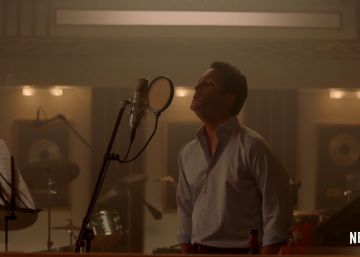 Luis Miguel: the series, returns after a year of stop and silence. The Secrets about the life of the controversial Mexican icon they will once again monopolize the debates and conversations of a large number of Spanish speakers “hooked” to the mysteries never discovered of one of the most important figures of Latin American music.

One year the thousands of fans have had to wait for the confirmation of the expected second season of their series. Netflix announced its filming with a video starring Diego Boneta and directed especially to the followers of the Latin American star, who every Sunday of 2018 enjoyed from their sofa small fragments of the private life of one of the most hermetic singers of Latin music. In February the shooting will begin in Mexico City: shortly after, probably in the same year, the myth will sneak into homes again.

Despite speculation about whether the protagonist was changed, Boneta will continue in the lead role. In the first preview you can see a brutal change of the Mexican actor, who will interpret two different timelines. According to the new appearance of the actor and the songs he plays, the era will be between the nineties and the early 2000s. After a first installment focused on the beginnings of the artist, the new plot will cover the difficulties faced by the star to sustain his family and professional life in full rise to stardom. So far there is no concrete release date.

In the last chapter of the first season, a Luis Miguel desperate visit to his hated father, Luisito Rey, on the deathbed in a hospital in Madrid and begs him to tell him the truth about the disappearance of his mother, Marcela Basteri, main knot of the first delivery. It was the crucial moment. The one that the spectators were waiting for after 12 episodes that they had marked every weekend since its premiere. There were only five minutes left and Luis Rey, interpreted masterfully by Oscar Jaenada, dies. After an intense cry of the singer, his manager, Hugo López, reveals that he has a Mosad report. “They found your mother.” The season ends and the content of López’s document was never discovered.

Luis Miguel: The series, it became a cultural phenomenon in Mexico and reached worldwide popularity throughout the Hispanic world. To the endless emotions that the star already generates, empathy was joined towards the artist for his family problems, love, depressions and loneliness. The idol suffered the same obstacles as normal people.

Such was the impact that Luis Miguel, the original, outside the media orbit and the stages, with the life cycle of the stars in phase of off, began to use the great impact of his series to catapult his career again. The icon got your best box office benefits of recent years, with tours of the United States, Mexico and Spain that resurrected him from the streak of unpopularity and millionaire demands that have been with him lately.

In addition to the revenues obtained by the singer, platforms such as Spotify They also reaped an overwhelming benefit. According to the application, since the beginning of the series, the reproductions of his songs increased up to 200%. But the subject that beat all the records it was that of Guilty or not (lie to me as always), which appeared in the fourth chapter and had an increase of 4,000% of reproductions, even sneaked into the list of 50 songs with more reproductions of Mexico.

Luis Miguel proved that his audience was never going to leave him. A new generation known to be addicted to trap and reggaeton has not only begun to tolerate his songs at parties, discos and karaokes, he has also begun to attend his concerts and become interested in his life. And if it weren’t for the series, they would never have known.