Pharmaceutical companies are called to play a crucial role in the economic and social recovery of Spain, emerging as a key sector due to their ability to create quality employment and its carry-over effect on R&D.

The pharmaceutical industry, as has been verified during the coronavirus pandemic, is becoming one of the engines of developed economies, generating a relevant contribution in terms of employment and added value, not only directly, but also indirectly through through the carry-over effect on other economic sectors.

The high-tech sector that generates the most jobs

As stated in the report “The value of medicine from a social perspective 2021” carried out by the Weber Salud Foundation, with the support of Farmaindustria, in terms of employment, the pharmaceutical industry directly generates employment for 45,216 people. It is the high technology sector that generates the most employment with 47% of the total, followed by the computer, electronic and optical products sector (28%) and the aeronautical sector (25%). 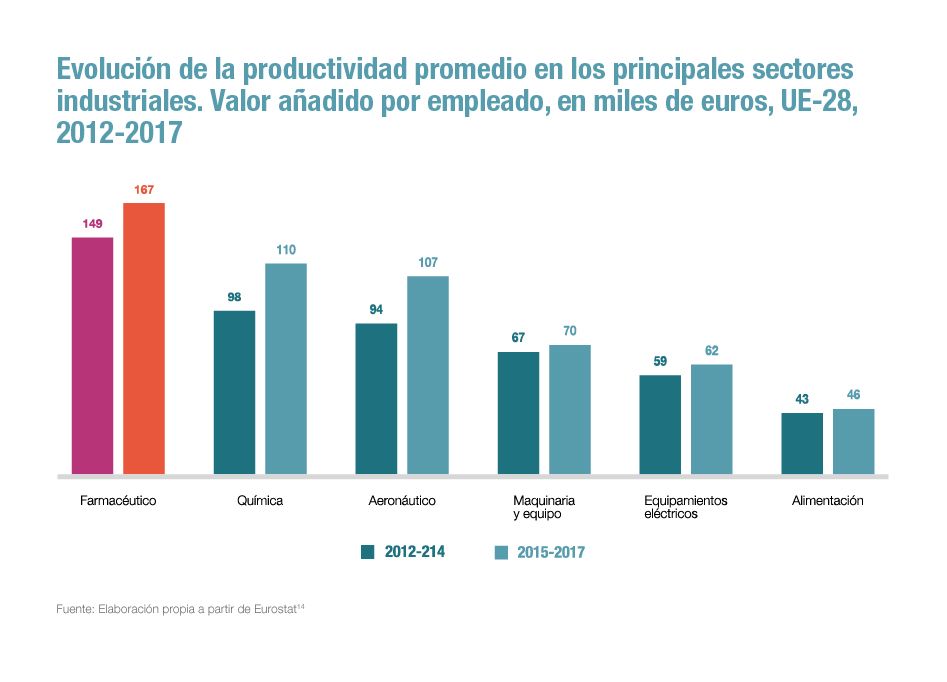 In addition, it is a benchmark sector in female employment: more than half of the jobs (52%) are held by women, compared to only 26% in the general manufacturing industry. The increase in hiring in this sector has been a constant for a decade.

Drag effect on production and export

Pharmaceutical companies make up an industrial sector with a high generation of added value and production value that also has a significant carry-over effect on other interrelated economic sectors. It is estimated that there are currently 366 companies that manufacture pharmaceutical products in Spain, which generate an added value of close to 5,000 million euros, 3.3% of the total generated by the manufacturing industry. 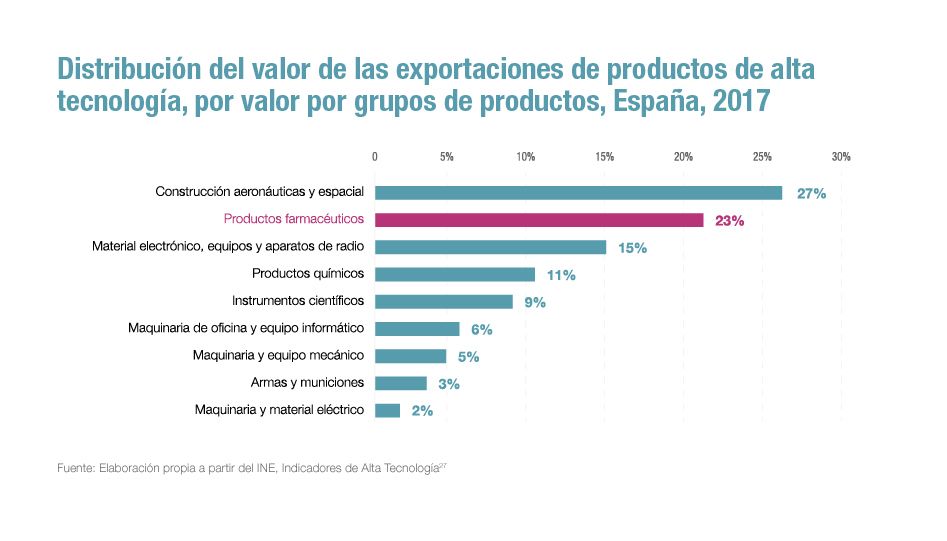 In addition, the pharmaceutical sector is one of the most productive of all the sectors of the manufacturing industries, only behind the coke and oil refining and tobacco sectors, and surpassing sectors such as chemical, aeronautical, metallurgical, paper and machinery.

Regarding production, the pharmaceutical industry in Spain produces medicines worth close to 15,000 million euros, with a constant annual growth average of 2.3%. In addition, and as is the case with employment, the production of the sector has a significant carry-over effect on other sectors. Each euro in production of the pharmaceutical industry in our country generates between 1 and 2 additional in other sectors.

At the same time that the pharmaceutical industry contributes to job creation and achieves a knock-on effect on other sectors thanks to its production, it is also a sector that favors foreign competitiveness through exports and imports. Exports of pharmaceutical companies based in the country have grown since 2005, and in 2020 they broke their record by adding 12,777 million euros. This has led to the relative weight of exports over the total manufacturing sector increasing each year and now accounts for 4.9% of all exports. The drug is already the fourth most exported product in Spain.

Reference in investment in R&D

Investment in R&D, on the other hand, continues to be the great hallmark of this sector in Spain. The pharmaceutical industry is characterized by its high intensity in R&D, given that the arrival of new drugs is not possible without a large prior investment in research. During the last 20 years, according to the report, the investment of the pharmaceutical sector in R & D & i has increased at an average rate of 7% per year, a growth much higher than that produced in the total of the industrial sector, which increased by only one 2% annual average. Thus, investment in drug research and development by pharmaceutical companies in Spain reached 1,211 million euros in 2019, which represents a new historical record and confirmation of the growing trend of this item in recent years. 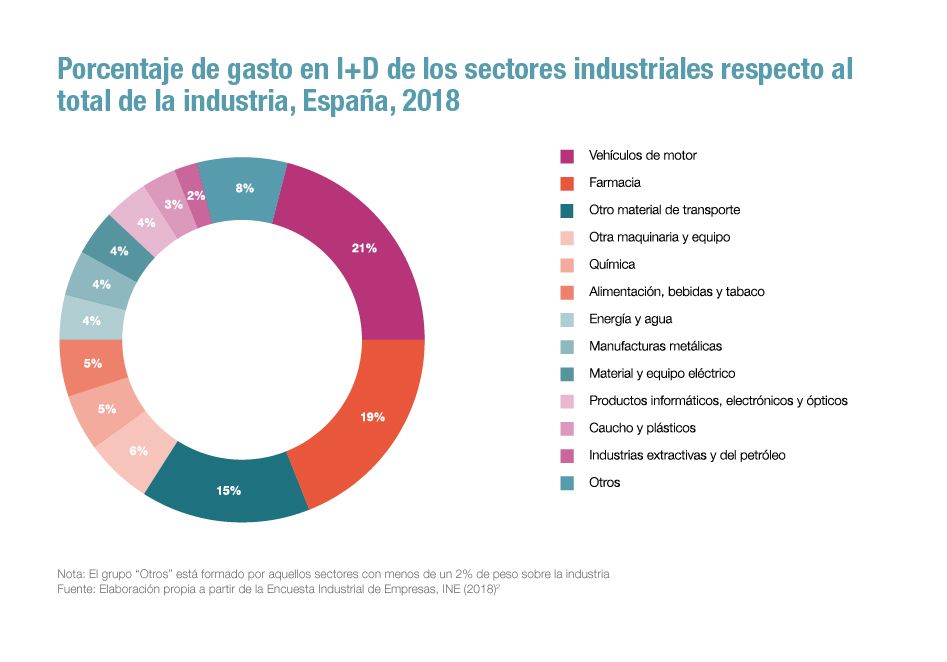 This investment figure represents 18.9% of the total investment made in this chapter by the entire industry in Spain, only surpassed by the automobile sector, with 23%.

This only confirms the pharmaceutical industry as a sector that drives the rest of the business fabric, acquiring crucial importance at a time like the present, in which the reactivation of the economy is more necessary than ever. 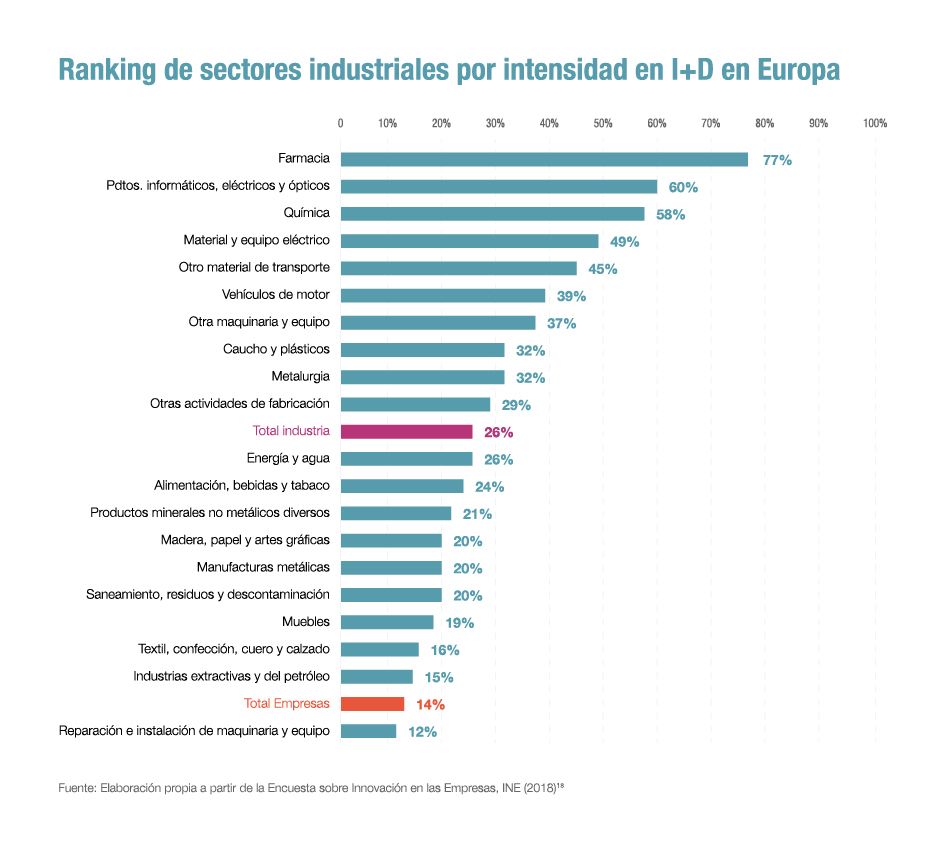