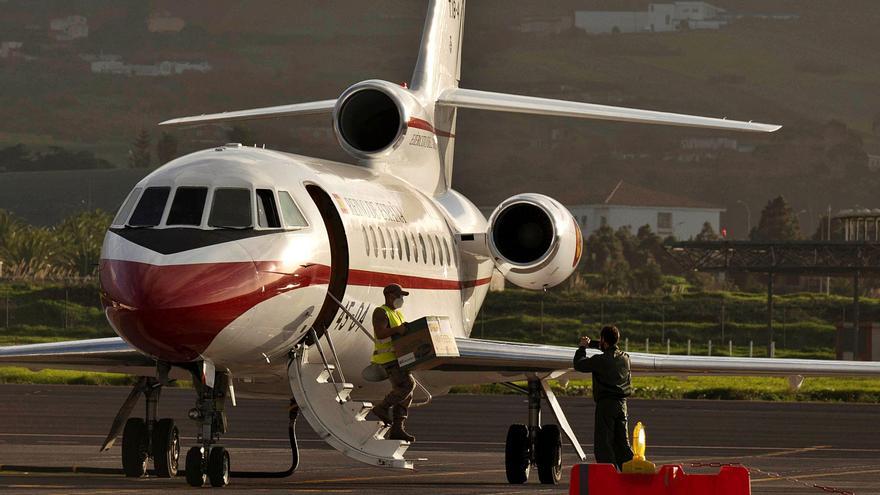 The Pfizer vaccine is already in the Canary Islands

The Covid-19 vaccine, developed by Pfizer and BioNTech, arrived in the Archipelago one day earlier than expected. A military plane from the Getafe – Madrid air base landed yesterday afternoon at the Tenerife North airport, with the roads on board. From there, three GES helicopters will distribute them throughout the morning throughout the rest of the Islands in order to start the vaccination campaign today. As guaranteed by the Regional Government’s Ministry of Health, the almost 400 doses that the Islands have for this day remained in the custody of the Ministry of Defense. Medical Colonel David Cobo Prieto, head of Health in the Armed Forces Operations Command, has been responsible for its distribution in the Canary Islands, Ceuta, Melilla and the Balearic Islands.

It was in the course of yesterday morning, when the Ministry of Health confirmed, through a statement, that the first batches of the vaccine had reached the national territory in a truck that had left Belgium, since last Wednesday, and who had spent the last night in Burgos. Specifically, the vehicle accessed at 7.29 a.m. to a warehouse owned by the US pharmaceutical company itself in Guadalajara. After the arrival of the first doses, the Army personnel collected the trays from the Canary Islands, the Balearic Islands, Ceuta and Melilla to proceed with their air transport. The roads corresponding to the rest of the autonomous communities were distributed by road.

Starting tomorrow, an average of 350,000 doses will be sent to the regions, on a weekly basis. Until March, the country will receive 4,591,275 units of this important preventive resource, of which 169,000 will be destined for the Canary Islands. In this way, it will be possible to satisfy the first stage of the Strategy against Covid-19.

As previously announced, the elderly who are institutionalized will be the first to receive the inoculation. Gran Canaria will begin today to administer the product at the El Pino Social Health Center, a space in which almost 85% of its elders have expressed their consent to receive the injection, and which plans to vaccinate a whole plant this day. Also, in Tenerife, the long-awaited event will take place at the Hospital Nuestra Señora de Los Dolores. Precisely, it will be on this island where the first vaccination is carried out, around 2:00 p.m.

In the rest of the community, the pioneer spaces in dispensing the product will be the following: the Amavir Haría and Las Cabreras-Doctor Domingo Guzmán residences, in Lanzarote; the Casillas del Ángel Residence for the Elderly, in Fuerteventura; the residence of the Immaculate Concepción Third Age, in La Gomera; the El Pinar Center for the Elderly, in El Hierro; and the Nina Jaubert Residential Center, on La Palma.

As pointed out by the leader of the Canarian Executive, Ángel Víctor Torres, in his speech after the celebration of the Governing Council last Wednesday, the vaccination operation has the participation of the Ministry of Health, the departments of Social Rights, the Town Councils and the public administrations of the regional government. In addition, the local and regional police will play a very active role in the transfer process.

Also, that same day, the Head of the Epidemiology and Prevention Section of the General Directorate of Public Health and president of the Spanish Association of Vaccination (AEV), Amós García Rojas, who accompanied Torres in his appearance, highlighted the complexity of product management. And the fact is that the vaccine needs to be kept at a temperature that is around 80 degrees below zero, something that is not usual in the rest of antidotes, “which makes any logistics that can be implemented difficult.”

In fact, the first doses that touched Canarian soil yesterday arrived refrigerated and must be applied throughout the day, since once the product is defrosted, it cannot return to the same state. For this reason, the nursing personnel who will be in charge of dispensing the inoculation have had to receive prior training.

Regarding the order of vaccination for this first phase, Health contemplates the following scale. In the first place, as has already been said, the residents and the health and social health personnel who carry out their work in these centers. A group that the administration estimates at 16,782 users and whose purpose is for them to be immunized before the end of January. Second, those health workers who act on the front line against the virus.

The rest of the target population is made up of other health professionals and people with a degree III dependency who are at home.

Vaccination will be voluntary and forecasts suggest that in the course of next summer, or at the latest in early autumn, 70% of the total Canary population will have been vaccinated – taking into account that each individual needs two doses – , which would allow, therefore, to obtain herd immunity and begin to regain the expected normality. Meanwhile, it will be necessary to maintain three essential security measures that, according to García Rojas, have proven effective in the battle against a pathology that has put the world in check: masks, hand washing and interpersonal safety distance.

It should be noted that the few side effects that the vaccine has caused in some people who have accessed it in other countries has generated reluctance in the product in a part of the population. To this must be added the record time in which the antidote has been obtained, which for many is considered a negative factor. On these lines, the president of the AEV has spoken on several occasions, as he considers that “it is an achievement for science” to have managed to develop, in less than a year, a vaccine that has demonstrated 95% efficacy in its trials clinical

In addition, the expert has emphasized many times on the safety of the product, as it is endorsed by the regulatory bodies of medicines, while he has put on the table the need to put an end to the deaths and income associated with the virus. A goal that can only be achieved “with a good response to the vaccination campaign.”