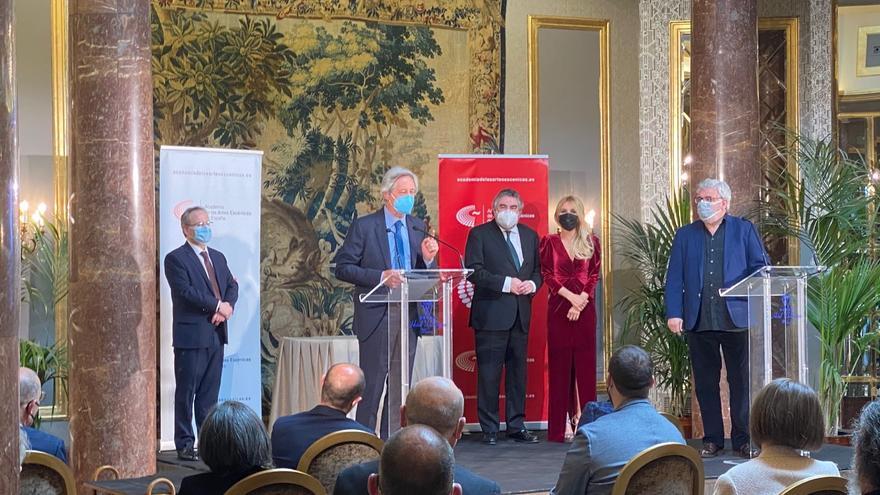 (Correct the first, second and tenth paragraph of TS4047 well since Tuesday and Thirteen receive a Gold Medal and Tamara Rojo and Calixto Bieto Honorable Mention)

Madrid, Mar 18 (EFE) .- The Performing Arts Awards have brought together Tuesday and Thirteen this Thursday, a humorous duo that has received the Gold Medal as well as the cultural association Assitej Spain, while Tamara Rojo, Calixto Bieto and Pedro Moreno have obtained an Honorable Mention.

“Long live the theater”, said this Thursday Millán Salcedo when he received the Gold Medal awarded by the Academy of Performing Arts of Spain to the humorous duo and given to them by the Minister of Culture and Sports, José Manuel Rodríguez Uribes.

“This award comes to us at a great time, imagine that it comes later and Millán gives him another ‘jamacuco’ and me a ‘telele'”, Josema Yuste said with laughter at the moment that he thanked this award.

“The most important thing is that this award is awarded to art, culture and talent, without any political symptoms, because art and culture belongs to the artist and therefore to the people and that is how it must always be,” he added. And you.

“Many years have passed, I have a long career, Josema, we are going to have to get together,” said Millán with laughter, who wanted to share that medal with his colleague Francisco Conde, the third member of the group with which he started “Tuesday and Thirteen “. “We started out as three,” he said, “and now we are two and separately.”

With a great sense of humor and in good harmony with his partner, Millán recalled that they separated 22 years ago and “there is still no day that they remind us of Móstoles empanadillas. I thought you were going to give us a golden empanadilla”, he joked. .

These comedians began their journey in 1985 and were characterized by creating a humor attached to the current situation of each moment. His imitations of popular characters, both in entertainment and in politics or sport, were always funny and unrestricted, the Academy recalled.

The president of the Academy Foundation, Cayetana Guillén Cuervo has been in charge of conducting the award ceremony, in which the dancer Tamara Rojo, artistic director of the English National Ballet in London since 2012, has lamented through of a message the “precarious situation” that the Performing Arts are experiencing “due to the health calamities and the economic crisis.”

Moreno has received the award with emotion and has valued the importance of costumes in opera, zarzuela, dance, ballet and especially in theater. “We do not dress the actors, our work helps the actors to get along with their characters,” he said.

Assitej España, a non-profit cultural association, whose objective is to promote the development of theater for children and youth in Spain, has also shown its appreciation.