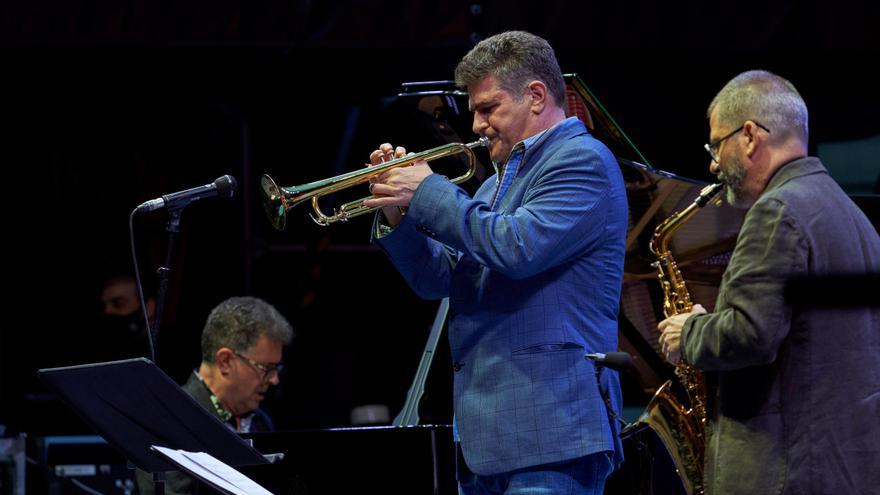 Vitoria, Jul 14 (EFE) .- The perfection of the Atlantic Bridge Project has given color to the closing of the first day of the 44th edition of an intimate Vitoria Jazz Festival that has brought together lovers of this musical genre two years later.

This international group, formed between Galicia and the United States, has exclusively presented their second album, “Portus Apostoli”, with a coordinated line-up led by Alberto Conde's piano and Kin García's double bass, but with a strong presence of Walter's winds. White, (trumpet and fliscorn) and Rosario Giuliani (alto sax), in addition to the drums by Miguel Cabana.

The band has presented some changes regarding its origin. The Italian Rosario Giuliani has replaced Jorge Pardo and has made it clear why he was chosen to record several songs with the famous Ennio Morricone, while it has not been possible to listen to the guitar of Steve Brown, who has not traveled due to the pandemic.

However, his colleagues have not wanted to forget him and have dedicated “Sweet angel and Julian's Day” to him, two of their creations for this project, with touches of bossa nova.

The flamenco of “34 sur”, which started the concert, made the intentions of this quintet very clear, which has played many musical genres such as rock in “Marginados” and even the Galician muiñeira in “Parallel 42”.

Each perfect only had as an answer an applause from a respectful audience that enjoyed the taste and mixes of these masters who pasted their instruments to perfection.

The stage was premiered in the afternoon by the Israeli Itamar Borochov, who started with his progressive "Motherlands", in a staging in which he has gone hand in hand with his quartet companions, Rob Clearfield, fine at the piano; Sam Weber, skilled at the double bass; Jay Sawyer, melodic on drums.

The sounds of the Middle East were immediately noticeable in the soft trumpet of the current winner of the Jazz Letter One Rising Stars Award, which gave prominence to the trio that accompanied him, which delighted the three-quarters of the stands that the Vitorian venue presented.

Dressed in the Kippa, he even dared to sing various melodies accompanying the piano and double bass.

In addition to the themes of the "Blue Nights" Itamar Borochov presented some of his creations that saw the light during confinement, always with the sensitivity that characterizes this artist when it comes to transferring his emotions to the public, who responded with two important ovations.

The audience, led by Borochov, set out to accompany the rhythms of the talented trio that played alongside the trumpeter in “Take me to the bridge”, a song that brought out the best of each one in the last song of a concert that was not given. place to encores.

For tomorrow, Thumbscrew will continue on the second day, led by guitarist Mary Halvorson, as well as Pablo Caminero Trío with the premiere of “Al toque”.

The Theater will host the young veteran Gonzalo del Val who comes from Catalan lands to Vitoria with his usual trio and Benet Palet will also be accompanied to interpret one of the best jazz works of the past year.