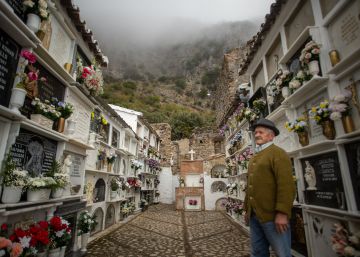 Isabel and Miguel found their final rest perched on the door hinge, more than two meters high. Francisca ended up in the recess of what was once the shrine of an altarpiece. The Isabelita girl, in an open hole in the sacristy wall. The brightness of their bleached niches contrasts with the hypnotic decline of the ruins of the church that welcomes them. With death, lime and flowers, the Cadiz village of Villaluenga del Rosario compensated the desecration committed during the French siege of 1808. Without pretending it, hundreds of neighbors turned the vestiges of their temple into a monumental tomb.

The soft and constant rain creeks in the cemetery of Villaluenga, a village in the Sierra de Cádiz of just 430 neighbors. It smells of fresh paint and wet rosemary inside what was once the church of San Salvador, built in 1722 at one end of the town. The water accentuates the bare architectural elements: the primitive colors of the semiderruid cover, the lost altars or the scallops raised to the air, already without dome and vaults to support. Two clueless tourists stare at the surroundings, while Rafael Piña, 87, is perched on a ladder to reposition the tiles of a niche: “Many people come surprised. I have not known more cemetery than this. ”

But the City Council has discovered the charm of what, in the town, is nothing more than its only cemetery since the early nineteenth century. "In recent years it is attracting important tourism, so we have decided to restore the monument itself, without rebuilding it, of course," says the mayor, Alfonso Moscoso. This is how the municipality has invested more than 60,000 euros in recovering the old bell tower and lastly an investment of 100,000 euros - with the help of the Diputación de Cádiz - to stabilize the dome's scallops. However, despite the curious and monumental space, the site does not have any protection for now, according to its file in the Cultural Heritage Guide of Andalusia.

The idea is that San Salvador remains standing as the main monument of the town and witness of the resistance that the neighbors of the early nineteenth century opposed to the Napoleonic siege during the War of Independence. "Villaluenga did not want to capitulate and the French came and burned the place," says a popular saying of the town. The now cemetery was one of those places that burned in 1808, after the municipality repelled three previous attacks. “Many goods were burned and looted, including this church,” recalls local researcher Antonio Benítez.

No one knows for sure when the ruins of San Salvador began to welcome the first finados, although tombstones have been preserved since at least the end of the 19th century. Today, the niches invade any minimum available space: the low walls, the ancient altarpiece niches or the recesses of the sacristy. "Space is used here," Benítez jokes. Thanks to this and recent renovations, the cemetery is guaranteed space for the next 20 years. "Nor is it that we have many burials, not more than three or four a year," says the researcher.

Although that seems to change, says Benítez: “There are people who left and come back to bury themselves. Even people who are not from here, but have a site requested. ” They will have to find someone to keep their niches, just as Piña does when repairing the burial of the dead of a family who went to live in Ronda. He is not the only one who challenges the morning encapsulated on the eve of the Day of the Dead party.

Older neighbors, two by two, enter and leave equipped with buckets and flowers, in a constant drip. The sisters María and Rosario Benítez bring red and white carnations to their parents, grandparents and in-laws. There is not a year left, although they know that their rite is in danger of extinction: “It is being lost. The day we miss, who will come? That is why I want to be burned, so as not to leave any charges, ”adds Rosario, laughing.